In The Prebiotic Kitchen 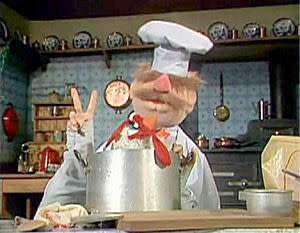 To explain the origin of life, scientists seek to explain the origin of its components. The three most important of these are RNA, DNA, and proteins. Just about all life today uses DNA to encode its genetic information. The only exception are viruses that use a single-stranded version of DNA, known as RNA. The rest of us have RNA in our cells as well, but it carries out other functions. Some RNA molecules are copies of genes that our cells use as templates to build proteins; others can silence genes or act as sensors or help to build proteins. As I wrote in an essay published in Science in January, this sort of evidence has led a number of researchers to argue that life as we know it, with DNA, RNA, and proteins, started out with just RNA. In the so-called RNA world, this versatile molecule acted both like DNA (storing genetic information) and proteins (carrying out chemical reactions, such as building new RNA molecules). It's a big hypothesis, and certainly not simple to test. No one has discovered any truly free-living RNA-based organisms, and so if the RNA World did exist once, its inhabitants may have been driven extinct when some of them gave rise to DNA-based life. And there's another big question: if there was RNA-based life, where did the RNA come from? One possibility is that the raw ingredients on the early, lifeless Earth reacted with each other and produced RNA. For 40 years, scientists have been investigating the chemistry of those ingredients--stuff like formaldehyde and cyanide--to see if they could indeed combine into the first biological molecules. It's been quite a struggle--but it turns out that it was a struggle the scientists brought upon themselves. They tried to make RNA the obvious way, but nature doesn't care what we consider obvious. RNA is a word-like molecule, with four different letters that can be combined into a vast variety of strings. Each letter is called a ribonucleotide. It has two parts. One part lets the ribonucleotide bind to the ribonucleotides on either side, to form a backbone. It's made of phosphate and a sugar called ribose. The other part is the nucleobase, which comes in four different forms and encodes genetic information.

So it seemed obvious that if indeed RNA emerged on the early Earth, its two parts must have emerged first. Scientists discovered reactions that suggested that nucleobases can indeed form from prebiotic molecules, as can the riboose-phosphate backbone. But when it came time to join together the two parts, the scientists hit a wall. The two molecules just don't like each other much. Their dislike of each other led some scientists to look into the possibility that life did not start out with RNA, but with another molecule that doesn't exist anywhere on Earth today. Later, RNA replaced that mystery molecule, and then later still DNA and protein evolved. But as I explained in my Science essay, University of Manchester John Sutherland thought it was too soon to rule out the possibility that life had started out with RNA. He began to look for other routes from prebiotic chemistry to RNA besides the obvious one. Today, in Nature, he and his colleagues report that they found it. In their paper, they published a kind of chemical road map that sums up what they did. Don't be put off--I'll explain the lay of the land below. 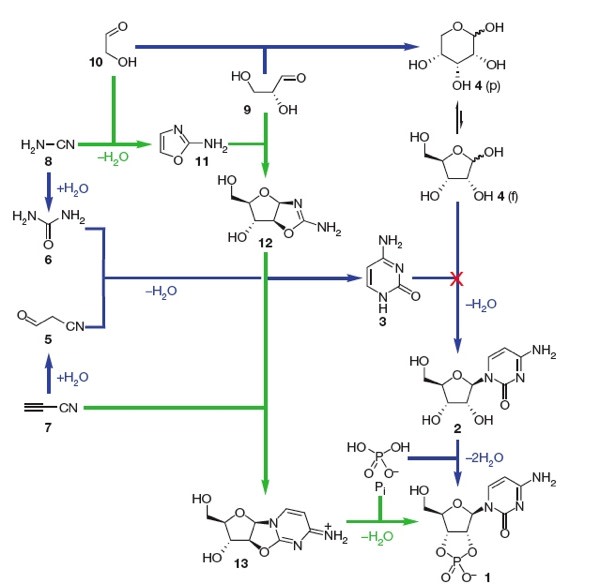 The blue arrows represent the obvious route to RNA, going from prebiotic compounds (marked here by 7,8, and 10) to nucleobases (3) and ribose (4). And the big red X shows the point at which this route fails. Sutherland and his colleagues started with the same ingredients, but cooked them in a different recipe, marked in green. Instead of trying to build the two parts independently, the scientists instead built a single molecule that had more and more components of the two parts already in place. They used just four reactions, all of which worked efficiently, to get one of the four ribonucleotides, known as cytidine. At the end of the process, the scientists zapped the mix with ultraviolet light (something that would be easy to come by on the early Earth, unprotected by an ozone layer). They eliminated some of the unwanted side products and turned some of the cytidine into another unit of RNA, known as uracil. In an accompany commentary, Jack Szostak of Harvard calls this experiment a "tour de fource." Of course, it doesn't answer all the questions about the RNA World--for starters, scientists still have to synthesize the other two letters in RNA's alphabet. But it does show how careful scientists must be not to declare things impossible. Sometimes they just need to redraw the map. Sources: