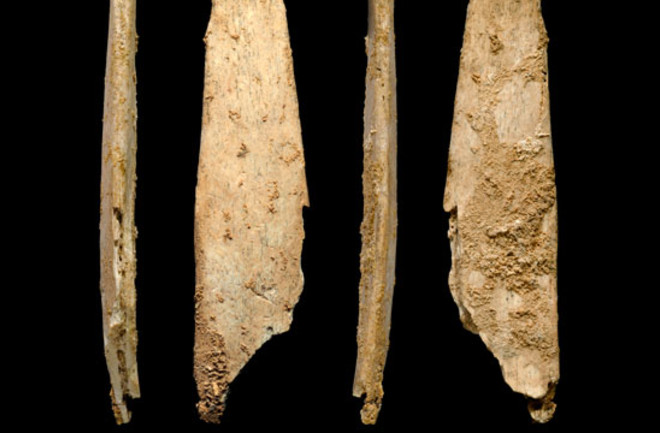 Four views of the most complete lissoir found during excavations at the Neandertal site of Abri Peyrony, near Bordeaux. Image courtesy of the Abri Peyrony and Pech-de-l’Azé I Projects. Though Homo sapiens are our notoriously brainy ancestors, it turns out that they weren't the originators of the first specialized bone tools in Europe. New finds from southwestern France have dealt another blow to the theory that anatomically modern humans moving into Europe in the Paleolithic introduced advanced technology to the region. It turns out, the established, more primitive Neanderthal population were making their own specialized bone tools.

Researchers reached that conclusion after analyzing four bone fragments from two separate Neanderthal sites in southwestern France. They confirmed that the artifacts showed clear evidence of being fashioned and utilized for a specific task — in this case, treating animal hides. The age of the fragments — about 50,000 years — predates the earliest evidence of modern humans (Homo sapiens) in the area by at least 5,000 years, the researchers report today in the Proceedings of the National Academy of Sciences. The researchers determined that the fragments were used as lissoirs, a type of tool previously associated only with modern humans. Lissoirs are rubbed against hides to make them smoother, more lustrous, tougher and, most importantly in the era before Gore-Tex, more impenetrable to the elements. The fragments, from two sites near Bordeaux, were made from the ribs of ungulates, probably red deer (Cervus elephus) or reindeer (Rangifer tarandus). The fragments have uniformly smoothed and rounded tips, the result of abrasion against a softer material, such as hide. Microscopic analysis, as well as experimental replicas crafted and tested by the team, confirmed that the wear patterns were the result of use rather than natural abrasion, disturbance by carnivores or other random events.

A Kink in the Chronology

Crucially, lissoirs were the only tool for this task in the Middle and Upper Paleolithic, which suggests the Neanderthals who made and used them were aware of and capable of exploiting the properties of bone as a material suited to the job. Although there are other examples of Neanderthal-fashioned bone tools, those tools were made using percussion techniques similar to stone tool-making, rather than the specialized polishing and grinding required to make a lissoir. The Neanderthal lissoirs are a significant find because they could force archeologists to rewrite the chronology of Paleolithic European humans. According to the researchers associated with the find, the lissoirs suggest either that modern humans arrived in Europe much earlier than believed, imparting their knowledge of tool-making to the resident Neanderthals, or that Neanderthals invented specialized tool-making independently of H. sapiens. A third theory suggested by the team, if proven, could be even more surprising given the long-standing stereotype of our low-browed relatives: perhaps it was the Neanderthal tool-maker who imparted his knowledge to modern humans.