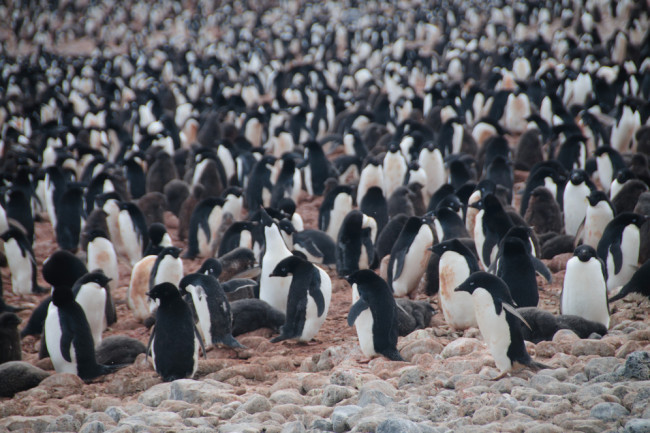 Penguins love company — some colonies of the flightless bird boast numbers over 1 million. And with squads that can run that deep, you can be sure they make a mess of things, if you know what I mean. (Hint: I’m talking about poop.)

But penguin waste isn’t just messy, it can be useful, too. Researchers have used it to help spot colonies in the past. Now, it seems that poop might be good for something else as well. In a study out in Current Biology, researchers from Vrije Universiteit Amsterdam (VUA) in the Netherlands and the U.K.’s Natural Environment Research Council found that penguin poop can help bolster local biodiversity.

The team, led by VUA ecologist Stef Bokhorst, focused on penguin and seal colonies in the Antarctic peninsula, famous for its frigid, harsh and largely barren environment. Specifically, they looked at a geographical range spanning from the South Orkney Islands to Marguerite Bay.

At various sites throughout that range, the researchers set up air sensors for a week to detect ammonia, a compound made up of nitrogen (a key plant nutrient) and hydrogen, that's found in penguin and seal poop. Plus, they gathered lichen and moss specimens situated near the colonies and in areas that didn’t see any penguin or seal activity, as controls.

After analyzing the samples, Bokhorst and his team gained a few key insights. “What we see is that the poo produced by seals and penguins partly evaporates as ammonia," says Bokhorst in a press release. "Then, the ammonia gets picked up by the wind and is blown inland, and this makes its way into the soil and provides the nitrogen that primary producers need in order to survive in this landscape."

The ground this ammonia covered is pretty impressive. The largest colonies saw the nutrient land anywhere within more than 2.5 square miles of their location. This boost in ammonia — and the subsequent boost in nitrogen — helped moss and lichen grow. In turn, there were two to eight times more of the tiny invertebrates that live in these so-called primary producers than in areas that weren’t within these ammonia footprints.

Using these moss and lichen samples as a proxy, the group estimates that these biodiversity hotspots likely pop up all over Antarctica. The find highlights the important role poo plays in keeping other forms of life plugging along on the frigid continent.