In African rivers, an electric Tower of Babel

The rivers and lakes of Africa are filled with conversations that you cannot hear or take part in. These chats are conducted by fishes called mormyrids or elephantfishes, which can produce and sense electric fields. They use their abilities to navigate through murky waters, hunt their prey, and talk to one another. It’s clearly a successful lifestyle, for there are over 200 species of mormyrid alive today. Bruce Carlson from Washington University in St Louis thinks that the origin of these diverse species lay in the diversity of their electric songs. Different species of mormyrid communicate with different electric signals, which work as badges of identity. When they’re ready to mate, they find partners of their own kind by listening out for their preferred electric dialect. The evolution of these diverse signals hinged in turn on changes in the mormyrids’ brains and sense organs. These allowed them to pick up subtler differences in their electric signals and talk to each other in more varied ways. This opened up a world of communication, but it was also the mormyrid equivalent of the Tower of Babel. By gaining the ability to communicate in different dialects, the species of mormyrid grew apart. 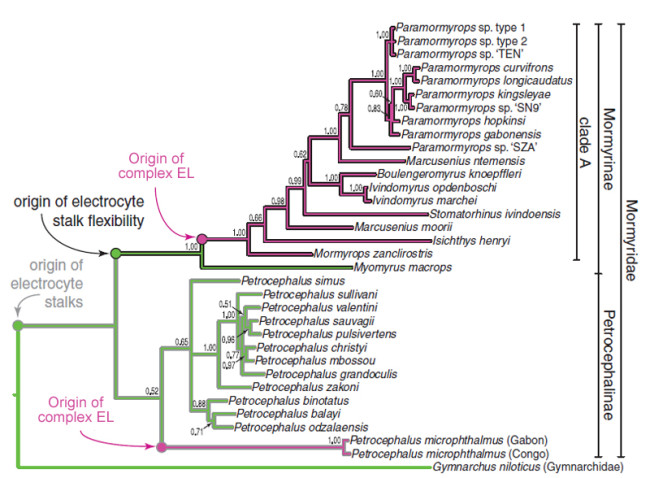 Carlson pieced together this sequence of events by comparing 26 different species of mormyrid. All of them detect each other’s electric fields using special structures called knollenorgans, dotted throughout the skin. These structures connect to a part of the brain called the exterolateral nucleus, or EL. Carlson found that the EL is more structurally complex in one subfamily of mormyrids called the mormyrins – it’s generally large and split into distinct front and back sections. The other subfamily – the petrocephalins – have a simple, uniform EL. It is no coincidence that there 178 species of mormyrins but only 30 species of petrocephalins. The same pattern applies to the knollenorgans. The diverse mormyrins have these electric sensors all over their bodies, while the petrocephalins typically have them only on their heads. The mormyrids analyse electric signals by comparing the timing of responses from different knollenorgans. The more broadly spaced they are, the more sensitive the fish would be to different signals. Carlson’s story was beginning to come together. It looked like some mormyrids had developed skin that can detect subtler variations in electric signals. They also had evolved brains that could better process the information from the skin. To see if that was true, Carlson tested living electric fish. He played them ten bursts of ten electric pulses – all identical, except for the ninth burst which was slightly out of time with the others. You would expect the fishes to respond less and less strongly to repetitive pulses. But if they noticed the change at the ninth burst, their responses should pick up again. That’s exactly how the fish behaved, but only if they had a complex EL. If they had a simpler, uniform EL, they didn’t notice the difference in the ninth pulse. The exceptions prove the rule. The only mormyrins that couldn’t detect the ninth pulse were the most primitive members of the group (Myomyrus) that haven’t evolved the complex EL of their cousins. Meanwhile, the only petrocephalin that could detect the ninth pulse was Petrocephalusmicrophthalmus, the one species that has evolved a complex EL, just like most of the mormyrins. So mormyrins are generally better than petrocephalins at detecting variety in their electric signals. They’re also better at producing variety. All elephantfishes create electric pulses using a special set of muscles near their tail. These are called electrocytes, and they act like living batteries. The electrocytes of mormyrins grow in a flexbile way, so different species end up producing very different pulses depending on how their batteries develop. This combination of abilities – to both produce and detect a wider variety of signals – set the evolution of the mormyrids into overdrive. It was a time of great musical experimentation. With great speed, one new species emerged after the other, all thanks to the production of new electric songs. Carlson found that the mormyrids with complex ELs and flexible electrolytes have diversified the timing of their electric signals 10 times faster than other members of the group. They have given rise to new species at three to five times the rate. (This group is known as "clade A" in the diagram; it consists of all the mormyrins except the primitive Myomyrus.) Again, the exceptions are instructive. P.microphthalmus did not give rise to a large number of different species because, even though it has a complex EL, it lacks the flexible electrolytes of the mormyrins. It can detect subtle changes in electric signals but it can’t produce them. It’s like a connoisseur of classical music that’s stuck playing the scales. Meanwhile, Myomyrus has flexible electrolytes, but a simple EL. It’s a deft singer with a tin ear. Reference: Carlson, Hasan, Hollmann, Miller, Harmon & Arnegard. 2011.Brain Evolution Triggers Increased Diversification of Electric Fishes. Science http://dx.doi.org/10.1126/science.1201524More on electric fish: