If Fungi Could Talk: Study Suggests Fungi Could Communicate in Structure Comparable to Humans

Electrical signals have similar structure to English and Swedish languages. 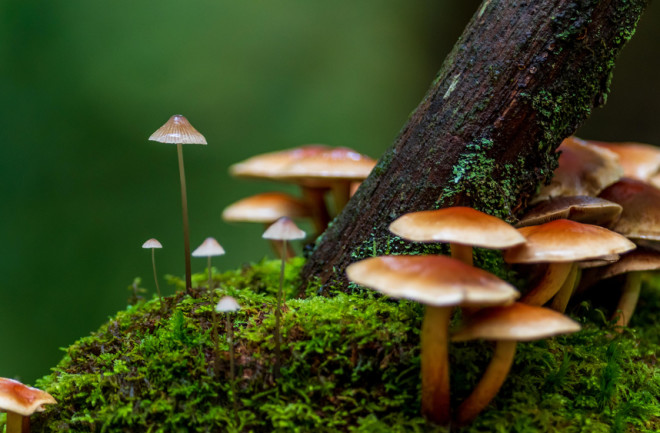 Mushrooms could be communicating in a structure that resembles human language, suggests a study published in the Royal Society Open Science.

Professor Andrew Adamatzky analysed the electrical signals in fungi and found patterns that have a structural similarity to English and Swedish languages at the University of the West of England’s Unconventional Computing Laboratory. The hope is to better understand how information is transferred and processed in mycelium networks, and to one day create fungi-based computing devices.

In plants, electrical signals could explain that different parts of fungi communicate to one another. Researchers in Bristol, England, measured these electric pulses by inserting microelectrodes into substrates colonised by mycelia, the microscopic roots of a fungus.

They examined the patterns of spikes in the electrical currents of four species of fungi and revealed that their spikes are clustered into "trains of activity." Those spikes resemble vocabularies of up to 50 words, with the most used words numbering 15 to 20. The length the "fungal words" averaged 5.97 — comparable to some human languages.

The fungus could emit electrical signals for multiple purposes, Adamatzky says. It could be making its presence known between distant parts of the mycelium.

"This is analogous to wolves howling," he says. Wolves howl frequently to alert each other and keep the pack together. The fungi could also be protecting themselves. By reporting sources of attractants and repellents to other parts of the mycelium, they could be transporting water and nutrients.

Adamatzky and colleagues found that patterns of electrical activity in fungi changed in response to electrical, optical, chemical, and physical stimulation in previous studies.

They examined four types of fungus in the study: Enoki, caterpillar, ghost, and split gill fungi. The latter two had more complex forms of communication and there is correlation between the complexity of their language and physical traits, Adamatzky says.

Scientists are finding growing evidence that plants are more intelligent than what was previously thought. Some species produce more nectar when they hear bees buzzing to reward them for pollination. And when exposed to audio of caterpillars, plants produce more chemicals to repel them. The electrical spike that a plant emits when cut has been compared to a "squeal" and a "scream."

Scientific discussion remains divided, but some see it as evidence that plants are engaged in complex communication with one another akin to speech.

There are also studies showing that mycelium performs a key and complex role in the forest ecosystem through communication. The wiry, microscopic roots of mycelium act as a network, which connects trees, allowing them to communicate and share water and nutrients.

"Fungi can sense everything humans sense and much more," Adamatzky says. They can detect light, chemicals, gases, gravity, and electric fields. They can respond to changes in the pH of their substrate, toxic metals, CO2, and direction of fluid flow.

Fungi also can sense chemical cues — especially stress hormones from other species — and could be reporting on the health and well-being of other inhabitants of the forest, Adamatzky says. He believes humans could use their unique sensor abilities in developing sensing blocks in adaptive buildings and in wearables that alert people to their own illnesses or toxic elements in the air.

The patterns of electrical pulses as forms of communication needs further study, though. Adamatzky concedes that pulses could simply be the result of fungal growth, even if they do resemble patterns of speech.

"The interpretation as language seems somewhat overenthusiastic, and would require far more research and testing of critical hypotheses before we see ‘Fungus’ on Google Translate," Dan Bebber, an associate professor of biosciences at the University of Exeter tells the Guardian.

Studies should look at a wider range of fungi to determine if they have a grammatical structure and if the fungal words can be classified, the study concludes. If its theory is proven, it would have profound implications for the understanding of communication.

"The findings might indicate that there are somewhat universal grammar underpinning communication in all living substrates," Adamatzky says.

More From Discover
The Sciences
3 Benefits of Sugar You Probably Didn’t Know About
Environment
Kelp Farming Could Help Clean up Polluted Waters
Environment
5 Ways To Conserve Energy This Winter
Planet Earth
This Citizen Science Project Is Taking On Roadkill — and Potentially Saving Animals
Planet Earth
Drought At Lake Powell Reveals Preserved World That Was Once Lost
The Sciences
What If Earth Hosted An Industrial Species Before Humans?
Recommendations From Our Store
My Science ShopDiscover STEM Kits
My Science ShopDiscover 2022 Calendar
My Science ShopStrange Science
My Science ShopElements Flashcards
Shop Now
Stay Curious
Join
Our List