A creative solution to the difficulties of studying creatures that are usually underwater. 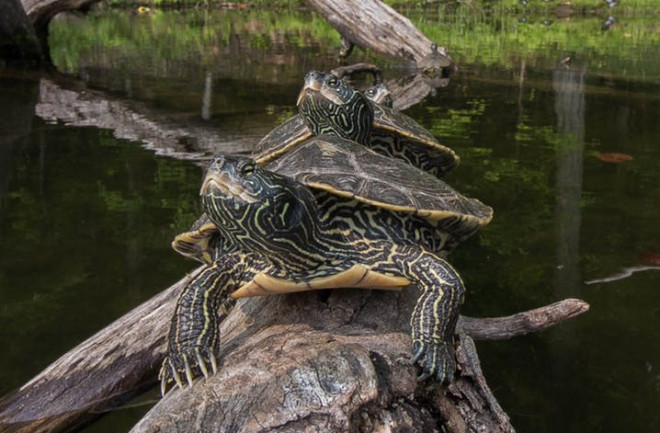 The northern map turtle is listed as a species at risk in Canada. Little is known about its reproductive behavior as it spends most of its life underwater. (Credit: G. Bulté)

I am a turtle voyeur. I record the private lives of turtles with hidden cameras and have gone as far as posting online some of the zesty bits. This peculiar penchant is part of my work as a chelonian behavioral ecologist.

I spy on turtles to document and understand how they make more turtles. This may seem straightforward given the notorious sluggishness of the subjects. How hard can it be to spy on turtles?

It’s harder than it sounds, but also much more exciting. And thanks to affordable gadgets such as action cameras and 3D printers, it is getting easier — and more fun.

In documentaries and popular media, turtles are often shown doing one of two things: lazily basking away summer days on a log or heart wrenchingly dodging cars to reach a safe place to bury their eggs. These noticeable behaviors are crucial to the baby-making business of turtles and we know a fair bit about both.

Contrary to what popular nature documentaries can portray, turtles spend most of their lives underwater. (Credit: G. Bulté)

What we know less about are the intricacies of mating and courtship: what happens below the murky surface of lakes, rivers, ponds, swamps, marshes and other watery environments.

Cheap, submersible action cameras are changing the game. Animal ecologists have embraced these toys because they allow them to take prolonged peeks below the surface while minimally disturbing their favorite study subjects.

Three-dimensional printing is also opening exciting avenues for the study of animal behaviour in the field. We are now able to inexpensively and rapidly produce anatomically accurate animal decoys.

We adopted these emerging tools to shed some light on the mating habits of the northern map turtle: a federally listed species at risk in Canada.

Most striking about map turtles is the huge difference in size between males and females. A large adult female can exceed 3,000 grams. A hunky male, on the other hand, will be lucky to tip the scale at 350 grams.

Two adult northern map turtles from Ontario showing the extreme size difference between males and females. The male is the smaller one. (Credit: G. Bulté)

This asymmetry of size is the outcome of two facts. First, male map turtles don’t fight with one another, the key behaviour driving male burliness in animals. With many animals, when two males simultaneously encounter a receptive female, things get ugly if not lethally bloody. The bigger male typically comes out on top and passes his large male genes to the next generation. Not so in map turtles. The diminutive males can’t be bothered by same sex rivals.

The second fact is the correlation between a mom’s size and the size of her offspring. Large moms lay large eggs. Large eggs hatch large babies. Large babies have better odds of making it through the first few days of life than small ones. Natural selection has thus favoured large size in females.

Whether males were aware of this was something we set to find out with action cams and 3D-printed turtle sex dolls of various sizes. Our prediction was straightforward. If a typical male encounters many females of varying sizes, which happens because of the unusual overwintering habits of this species, and cannot possibly mate with all of them, he should prefer to mate with the larger ones.

Every fall, map turtles gather at specific spots of lakes and rivers where they spend their winter days quietly sitting at the bottom. These overwintering grounds also serve as mating grounds. Turtles mate when they arrive at these communal sites in the fall and afterwards, they take a five-month long winter snooze (it looks like this).

When spring finally arrives, they mate again before taking off for the summer. Hundreds of turtles can use these communal grounds, making it inconceivable for any male to mate with all the females present. For a brief period, we have a bunch of libidinous turtles concentrated in one spot. This is a dream come true for a chelonian behavioural ecologist like myself.

To test our prediction, we 3D-printed decoys of female map turtles and placed them in pairs at two of these special meeting spots. The decoys were identical in every respect except for their size. One was about the size of an average female, and the second was slightly smaller than the largest female on record for our study population.

The incongruous pair was mounted on a rig fitted with an action camera. The whole assembly was dropped at bottom of the lake early in the morning and recovered at the end of the day. This was repeated for nine days with two pairs of decoys.

The response of wild males was clear: they preferred the larger female. The large decoys received nearly twice the number of male visits and five times more mating attempts than the smaller ones.

The video below shows what a mating attempt looks like — this video is played at eight times the speed, and with musical accompaniment.

Action cameras offer a window into the private, underwater lives of animals. With these devices and other technologies like 3D scanners and printers, we are able to not only test hypotheses and predictions, but we can also simply observe what animals do.

As we were sifting through videos from our experiments, we witnessed a number of phenomena we did not know were possible, including a female map turtle seemingly squeaking at a female decoy and a loon attacking a male decoy. These may just be anecdotes for now, but perhaps there is more to them.

The ubiquity and affordability of action cameras will surely yield many insightful observations about aquatic animals including turtles. Some may influence how we think about animal behavior, others may just be intriguing tidbits of a world largely unexplored.

This is a guest post from Grégory Bulté, Instructor, Ecology and Evolutionary Biology, Carleton University. The views reflected in this article belong solely to the author.