I am Lionfish, hear me ROAR! 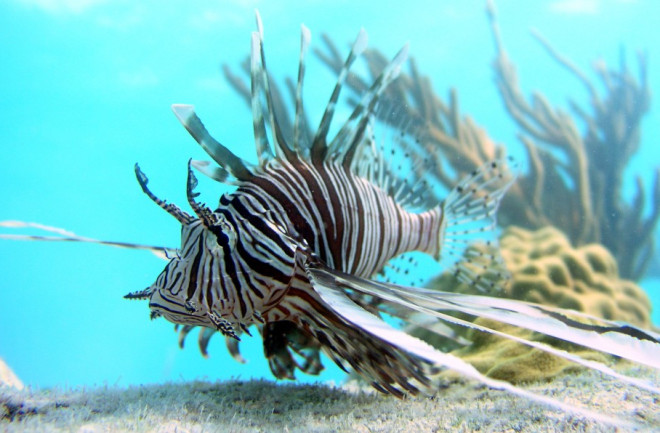 An invasive lionfish in the Bahamas. Photo by Mark Albins.

Ok, well maybe more like grunt or drum. Still, this recording comes from the first study to document that lionfishes—the invasive, venomous scourges of the Atlantic and Mediterranean—make sounds.

Many fish species use noise to communicate—so many, in fact, that their sounds can create a morning chorus on a reef akin to the wakening melodies of birds. There is even an entire family of fishes, the Haemulidae or “grunts,” whose common name reflects their soniferous tendencies. But while scientists have known about the noises of some fish species for decades, including many cousins of the lionfishes in the order Scorpaeniformes, no one had listened closely to determine if lionfish make sounds.

“Spearfishers have been saying for years that they can hear lionfish making noise after they have been speared and bagged,” explained Alex Bogdanoff, a PhD student at North Carolina State University. And there are notable behaviors—cooperative hunting and certain mating rituals—that would suggest that lionfishes might communicate audibly. But to confirm sound production in lionfishes, Bogdanoff and his colleagues had to isolate them from the cacophony of other reef sounds while still somehow stimulating them to make the noises they might normally.

“Can you hear me now?”—me holding a young invasive lionfish speared off the coast of North Carolina. Photo by NOAA intern Dave Matthews

The team placed several lionfish inside a concrete tank and recorded the soundscape for 5 days. They then analyzed the audio to describe their basic call characteristics—the types of sounds produced and audio features like frequencies and durations. They found that the lionfish they examined produced two distinct vocalization types: a hum-like call and the repetitive pulse sounds (or ‘drumming’) you can hear in the audio above.

The research wasn’t able to distinguish why the fish were making noise—”It is possible that lionfish use sounds during courtship and spawning, aggression, hunting, and as a response to threatening situations,” said Bogdanoff—so future investigations are necessary to discover which behaviors are associated with sound production, or whether different sounds are used for different purposes. Bogdanoff and his colleagues are already digging in to this, as well as determining anatomically exactly how the sounds are produced.

Bogdanoff and his colleagues are hopeful that this finding will help managers keep tabs on the ever-growing invasive populations in the Atlantic and Mediterranean. As a part of his dissertation work, Bogdanoff is working to develop a passive acoustic method for monitoring lionfish. Similar methods have been used to track rockfishes, a commercially important group of fishes that also happen to be evolutionary cousins of the lionfishes. “If lionfish use sounds for attraction or aggregation,” said Bogdanoff, such noises “could potentially be used to bolster control efforts.”

Learn more about lionfish at the Invasive Lionfish Web Portal