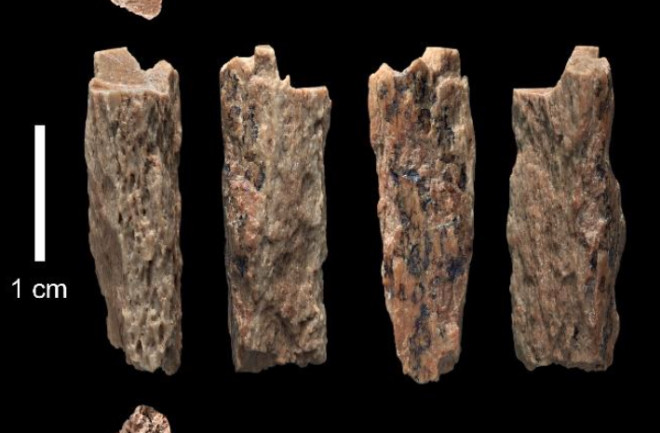 Humans think of themselves as exceptional among the creatures inhabiting Earth. But it wasn’t always so.

Multiple groups of humans once co-existed with Homo sapiens, including Neanderthals and the mysterious Denisovans. And we did more than simply live alongside them — traces in our DNA reveal that our ancestors also interbred with other human species.

Now, for the first time, researchers have found direct evidence of this interbreeding in the form of a 13-year-old girl from Russia’s Altai Mountains. Her mother was a Neanderthal and her father was a Denisovan, making her a first-generation hybrid of human species.

Researchers from Germany’s Max Planck Institute for Evolutionary Anthropology and elsewhere uncovered the unique specimen among a trove of bones excavated from Denisova Cave in Siberia. The cave is the only place where archaeologists have found bones belonging to the Denisovans, a species of ancient human who we still know very little about. Thousands of bones have been retrieved from the cave since digging began on 2005, yet many remain unanalyzed. Researchers are working through the backlog now to uncover more information about those who inhabited the cave over the course of tens of thousands of years.

One of those cave inhabitants was a girl who died around the age of 13 more than 50,000 years ago. Today, we know her from just a fragment of one of her long bones, a specimen called “Denisova 11.” Researchers at Max Planck extracted samples from the bone to retrieve genetic information. Their first attempt pegged her as being pure Neanderthal, based on data from her mitchondrial DNA, inherited only from the mother. But the sample was so well-preserved, they decided to conduct more in-depth tests of her whole genome.

“And we were very surprised when the data started coming in to see that it was actually equally close to both Neanderthals and Denisovans,” says Svante Pääbo, a co-author of the paper and director of the department of genetics at Max Planck. “I thought they had screwed up something.”

But, as they dug further, they found that the girl, let’s call her “11” for short, truly did have equal amounts of both Neanderthal and Denisovan DNA.

“You can see that in each chromosome pair, one of the partners comes exclusively from the Neanderthal and the other from something that’s exclusively Denisovan,” Pääbo says.

And, because all of the genes passed on through mitochondrial DNA were Neanderthal, 11’s mother must have belonged to that species, making her father a Denisovan.

The find is direct proof of interbreeding between human species, though it doesn’t come as a surprise. Scientists have already sequenced the genomes of both Neanderthals and Denisovans, and knew that the two had mated before. How often this happened, and where, though, are unclear.

The find suggests that the two species were inhabiting the Altai mountains 50,000 years ago when 11 died, and were obviously in some sort of contact with each other. Denisova cave has yielded bones from both Neanderthals and Denisovans as well as artifacts made by H. sapiens, though it’s not yet evident that all three species were living near the cave at the same time.

Neanderthals and Denisovans are thought to have split from each other around 390,000 years ago, long before 11’s birth. They separated from humans even farther back, around 550,000 years ago. Interbreeding occurred between all three species, though, and today, around one to two percent of non-Africans’ DNA is from Neanderthals. Denisovan DNA shows up only in those of southeast Asian and Pacific Islander descent, where it can be as high as six percent.

We know that Neanderthals ranged across Europe and Asia until their disappearance about 40,000 years ago – a distribution that overlaps broadly with Homo sapiens‘ forays into the region. Where Denisovans lived is more difficult to say, as we’ve only found their remains in a single location in south-central Russia.

Digging further into 11’s genome, the researchers found that her Denisovan father also possessed Neanderthal traits, indicating that he too could count a Neanderthal in his family tree. It’s hard evidence that interbreeding occurred on at least two occasions, packed into a single find. Her mother’s genetic history yielded insights as well — she turned out to be more closely related to Neanderthals living in Western Europe than to another Neanderthal found at Denisova cave.

Though it’s not clear whether her descendants moved to the Altai from Europe or the other way around, it’s an indication that Neanderthals were migrating across Eurasia long before they disappeared.

And while many researchers refer to Neanderthals and Denisovans as species separate from us and each other, the term may not be quite accurate. Pääbo says that he and his team avoid the term altogether, because there’s no clear definition of what makes a species. After all, one of the most common definitions holds that different species cannot produce viable offspring together, something that’s clearly not true. Pääbo and his team use the term “group” in their paper, a term that avoids the ideological baggage of the species debate.

“I think that there will never be an answer to that because people will always have different opinions on what is a species,” he says. “I think it’s not really an interesting question to discuss.”

What the new work doesn’t give us, unfortunately, is much in the way of new information about the Denisovans. The few bones we have are fragmentary and tell us little about what they actually looked like. Of greatest interest to archaeologists would be a Denisovan skull – researchers have never found one. Analyzing the skull morphology could offer important data on what a Denisovan brain may have looked like. Also unknown is how well hybrid individuals like 11 fared.

Though the find, and the new genetic information inside, is important, it’s just another indication that interbreeding between members of our genus was likely quite common. Finding evidence of cross-species mating in one out of three Denisovan individuals unearthed so far can’t be a coincidence, Pääbo thinks.

“You can’t be that lucky,” he says. “When these groups met, they interbred quite freely with one another.”

That extends to the ancestors of modern humans, as well. Though we haven’t found such first generation specimens, there are surely individuals like 11 whose parents were H. sapiens and Neanderthal or Denisovan.

The story of how humans, and H. sapiens in particular, spread across the globe is being constantly revised as new finds pour in, but it’s clear that it’s much more complicated than a simplistic tale of modern humans edging out other more ancient species. We crossed paths, and interacted with, other species similar to us many times during our history.

The researchers published their work Wednesday in Nature.