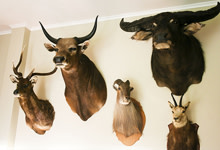 The human penchant for animals of impressive size has left some of the most hunted species smaller and weaker. A new study finds that human-induced selection, through activities like hunting and fishing, is having a profound effect on the evolution of many species.

target the biggest and strongest individuals. To find out how human predation affects species evolution, researchers

examined previously documented, hunting-induced changes across 29 species in 40 locations, including commercially targeted fish, bighorn sheep, caribou, and several marine animals such as limpets and snails. Two plant species were also included in the analysis: Himalayan snow lotus and American ginseng [National Geographic News]. The hunted species were compared with 25 species that are not hunted but subject to other human interference and another

20 species that face only "natural" pressures, such as climate, competition for resources, or animal predators [National Geographic News].

All three categories included some rapid modifications, so "comparing the databases was kind of a showdown," Darimont says [ScienceNOW Daily News].

Since trophy hunting removes the strongest individuals from the gene pool, the breeding populations left behind become progressively smaller and younger. Researchers are concerned that these younger populations may not be able to reproduce as well. Darimont says that in fish especially, "younger and smaller breeders produce less offspring, and this jeopardizes the ability of prey species to recover after harvest."

Reporting in the Proceedings of the National Academy of Sciences [subscription required], the researchers found that hunted species won the showdown—evolving 50 percent faster than those facing other human interference and three times faster than those not affected by human activities. Species exploited by humans showed a general trend of evolving smaller body size and breeding at a younger age.

The body and horn sizes of bighorn sheep, for example, have declined by about 20 percent in the past three decades as a result of human hunting. Atlantic cod on the east coast of Canada now breed at five years of age instead of six—a shift that has occurred in only two decades [National Geographic News].

Such shifts may also imperil other species that have evolved alongside the targeted animals, either as predators, prey, or competitors, Darimont added [National Geographic News].

Related Content: 80beats: Elephant-Lovers Worry About Controversial Ivory Auctions in Africa 80beats: To Save the Fish in the Sea, Give Fishers a Financial Share DISCOVER: Fish Farming Threatens Wild Salmon