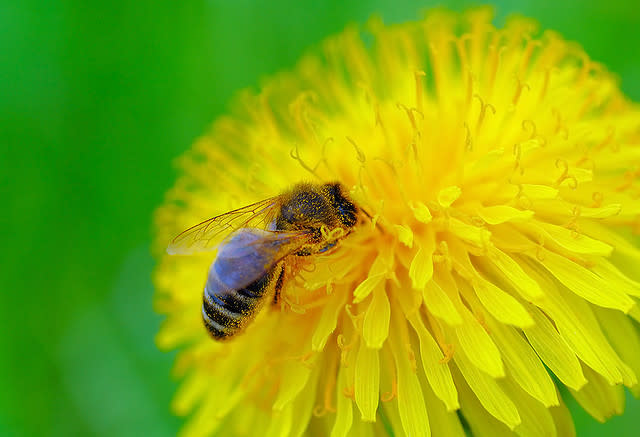 We've all been there: it's easy enough to follow our plans to exercise and eat healthily, until suddenly it's 4:30 in the afternoon and we're ready to plunge our faces into the first dandelion we see. Honeybees, like humans, can exert self-control when making decisions about food. But when they get hungry enough, that control buzzes right out the window. For a bee, of course, self-control isn't about Pilates and salads. Worker honeybees mostly consume nectar. When they get back to the hive they regurgitate that food and share it with the other bees. A responsible worker bee should choose the best nectar sources—not just settle for the first flower she finds—and communicate where they are to her sisters back home. Researchers have found that honeybees show self-control. They'll hold out for a larger or sweeter nectar reward instead of drinking a smaller or less sweet reward immediately. But will bees always choose the good of the colony over their own needs? If a bee is hungry enough, will she lower her standards? To find out, biologist Christopher Mayack of the Martin Luther University of Halle-Wittenberg in Germany gathered young forager honeybees. Mayack wafted different chemical smells over the bees, then gave them sugar rewards. This taught the bees to associate certain odors with certain outcomes: one smell meant a large gulp of sugar water was coming, and another smell meant only a small sip. One set of bees got these rewards immediately. For another set of bees, the small reward came after a one-second delay, and the large reward came after five seconds. The bees who experienced a delay still learned to prefer the smell of the large reward, even though they had to wait longer to get it. If they were foragers in the field, this might be like bypassing a small patch of flowers in favor of a bigger, juicier patch just ahead. (If they were humans, it might mean not spoiling their dinner with snacks.) Then Mayack stopped feeding the bees. Six hours, 18 hours, or 24 hours later, he tested them to see how much self-control they had left. The bees smelled two odors at a time, one on each side of their heads. Whichever way a hungry bee turned her head first—sticking out her proboscis in search of sugar water—indicated her choice. At six hours, bees usually chose the larger reward, whether or not it was delayed. As more time passed, the starving bees were increasingly likely to choose the large reward—but only when it came immediately. And at 24 hours of starvation, bees were no longer willing to wait five seconds for their drink of sugar water. Most of them chose a smaller, immediate reward instead. When Mayack analyzed the chemical makeup of these bees' brains, he was surprised to find high levels of dopamine in bees that had gone hungry for 24 hours. In vertebrate animals, Mayack says, studies have shown that increased dopamine in the brain leads to more impulsive behavior. But stress in bees usually lowers dopamine, so he didn't expect starvation to raise it. Mayack emphasizes that he doesn't know yet whether the extra dopamine actually caused the bees' impulsive behavior. Honeybees display "one of the most extreme forms of social behavior in the animal kingdom," Mayack says. At first glance they appear totally selfless. Yet his study shows that a bee in distress will act in her own best interest, ignoring the needs of the colony. The brain pathways that lead to this behavior may be left over from an earlier time in bee evolution, Mayack says, when the insects lived on their own. When a bee is hungry enough, she reverts to acting like a solitary insect instead of a group member. Whether she feels guilty afterward, resolving to have more self-control tomorrow (and maybe hit the gym), is a question for another day.