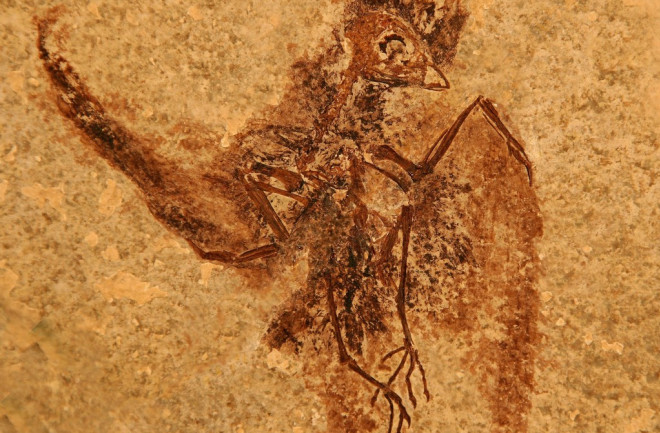 E. rowei was an evolutionary precursor to the group that includes today's swifts and hummingbirds. Courtesy Lance Grande of the Field Museum of Natural History Despite being closely related, hovering hummingbirds and gliding swifts evolved markedly different wing shapes and flight characteristics, ruffling the feathers of scientists trying to understand when the birds’ lineages diverged. However a newly identified fossil of the birds’ common ancestor is helping paleontologists piece together the shared past of swifts and hummingbirds. The fossil — that of Eocypselus rowei — is notable particularly for the preservation of its feathers, making reconstruction of the wings far more accurate than from skeletal remains alone. E. rowei, found in the fossil-rich Green River Formation in southwestern Wyoming, lived 50 million years ago and was less than five inches long from head to tail. Like hummingbirds and swifts, the small bird had a notably stout humerus, or upper-arm bone. According to a reconstruction based on its bones and feathers, however, E. rowei’s wing shape differed from both of its modern relatives. The wing represents an intermediate shape between the two, suggesting the Pan-Apodiformes lineage evolved a small body shape first before splitting into different wing shapes and flight characteristics, according to findings published today in the Proceedings of the Royal Society B. Hummingbirds have a short wing with a blade-like shape that creates lift on both the upstroke and the downstroke, allowing the birds to hover. Swifts, however, evolved markedly elongated wings for efficient gliding as well as speed — the aptly-named swift holds the record in fastest level flight among all birds, reaching speeds of nearly 70 mph, according to a 2010 study. Although peregrine falcons have been clocked at more than 180 mph when diving at prey, they’ve got gravity on their side. Level flight is more difficult and requires more power from the bird itself — and no bird is swifter than the swift. Given the medium-sized wing shape of E. rowei, the study’s lead author Daniel Ksepka noted, “this fossil bird represents the closest we’ve gotten to the point where swifts and hummingbirds went their separate ways.” Scientists studying the E. rowei specimen’s feathers also discovered fossilized melanosomes — tiny cell structures with melanin — that suggest the bird was probably black, and possibly had an iridescent sheen similar to that of modern swifts.