Humans Share Better Than Other Primates, Shedding Light on Our Evolution 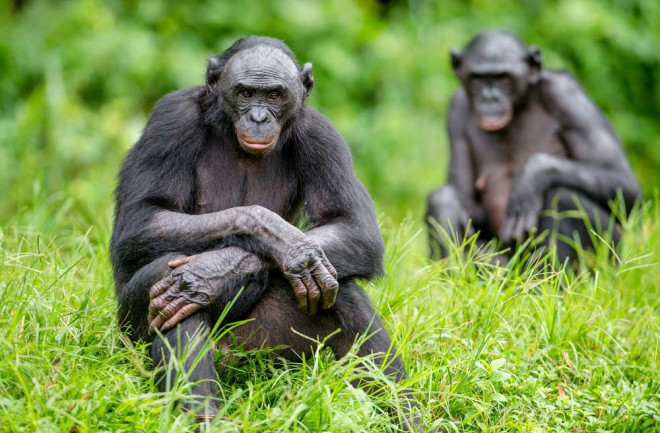 Bonobos, like this female in the Democratic Republic of Congo, will share food with their social groups. However, unlike humans, they wont share tools and other objects. (Credit: Sergey Uryadnikov/shutterstock) The chimp-like apes known as bonobos are legendarily generous when it comes to sex. New findings now reveal they also share food with others, but not toys or tools. This research underscores that sharing is not unique to humans, but the breadth and flexibility of this sharing may be. Although nature is typically seen as "red in tooth and claw," humans are often willing to voluntarily share resources with others. And the emergence and development of this sharing likely helped play a key role in human evolution. It helped ensure that vital needs were reliably met, and this food helped feed ever-larger brains. Yet scientists have debated whether humans are unique compared with the great apes when it comes to helping others. One argument suggests that only humans are helpful enough to share food. The other side says that although the great apes can share in specific ways, only humans are versatile enough to share both food and other items.

The Origins of Sharing

To shed light on the evolutionary roots of sharing, researchers investigated bonobos. "There are huge debates among researchers about the evolutionary origins of human cooperation," says study lead author Christopher Krupenye, an evolutionary anthropologist at the University of St. Andrews in Scotland. "And most of that theory is based on comparisons between chimpanzees and humans. But bonobos are equally as closely related to humans as are chimpanzees and, therefore, are just as important species for comparison." To see how much bonobos share, researchers conducted two experiments. In one, 18 bonobos were tested one at a time to see whether they would retrieve and share an out-of-reach stick for a human experimenter that motioned toward and called out for it. In the other, 10 pairs of bonobos could interact through a mesh window and a hole, and one member of each pair was given two rocks, while the other was given five palm nuts, a snack they could crack with their teeth but preferred hammering open with rocks. The scientists found the bonobos did not share the stick, although they often retrieved it and even playfully teased experimenters with it. The apes also did not share the rocks, but they did share nuts. "Food sharing has been documented in primates and especially bonobos, but the vast majority of instances of food sharing in other species involve tolerating another individual taking food from you," Krupenye said. "It's exceedingly rare for primates to actively hand monopolizable food to others."

All in all, this work revealed that bonobos shared food but refused to share toys and tools. This stands in contrast to chimpanzees, which typically share tools and other items but not food. "It is a bit puzzling why we see different forms of helping in bonobos and chimpanzees," Krupenye said. "Bonobos are believed to have experienced more abundance in food during their evolutionary history, requiring less competition and selecting for more tolerance and sharing in food settings. This likely explains their greater motivation to share food." "As for the lack of motivation to share toys or tools, our best guess is that bonobos may value objects more strongly than chimpanzees, perhaps because objects can create opportunities for playing or socializing, as we saw in the teasing behavior documented in our first experiment," Krupenye said. These findings show that both chimps and bonobos display "some forms of helping that were believed to be unique to humans, and that the underlying motivations may have already been present in our last common ancestor," Krupenye said. "However, humans may be special in the breadth and versatility of our helping activities." The scientists detailed their findings online September 12 in the journal Proceedings of the Royal Society B.