Humans have a magnetic sensor in our eyes, but can we detect magnetic fields? 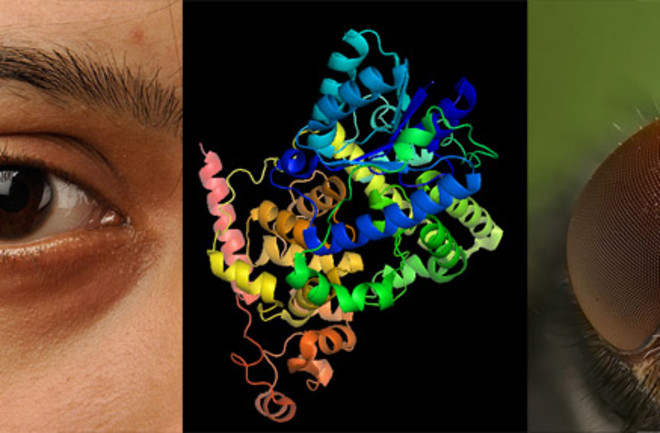 Many birds have a compass in their eyes. Their retinas are loaded with a protein called cryptochrome, which is sensitive to the Earth’s magnetic fields. It’s possible that the birds can literally see these fields, overlaid on top of their normal vision. This remarkable sense allows them to keep their bearings when no other landmarks are visible.

But cryptochrome isn’t unique to birds – it’s an ancient protein with versions in all branches of life. In most cases, these proteins control daily rhythms. Humans, for example, have two cryptochromes – CRY1 and CRY2 – which help to control our body clocks. But Lauren Foley from the University of Massachusetts Medical School has found that CRY2 can double as a magnetic sensor.

Foley worked with Drosophila flies, which can normally sense magnetic fields using cryptochome. You can show this by placing them in an artificial magnetic field and training them to head in a specific direction in search for food. Normal flies can do this easily. Mutants that don’t have the cry gene, which makes the cryptochrome protein, lose their ability to find their meal.

To restore their internal compass, Foley simply has to give the mutant flies extra copies of cry. But she found that the human version of the gene works just as well. When she loaded her mutants flies with human CRY2, she found that they could sense magnetic fields like their normal peers. Foley also found that human cryptochrome is sensitive to blue light. It only managed to restore the magnetic sense of flies when they were bathed in this colour.

These simple experiments show that human cryptohrome can act as a magnetic sensor. This doesn’t mean that it does, much less that humans can sense magnetic fields. Plugging human cryptochrome into an alien environment like the body of a fly tells you very little about what it does in its native surroundings.

Roswitha Wiltschko, one of the scientists who first discovered the magnetic sense of birds, says, “To sense the magnetic field, one does not only need a molecule like cryptochrome, but also an apparatus that picks up the changes in that molecule and mediates it to the brain. Drosophila obviously has this apparatus, but humans? I have my doubts.” Steven Reppert, who led the new study, is also cautious. However, he notes that Cry2 is heavily active in the human retina. “It’s beautifully poised to sense light but we don’t know if it has the downstream pathways that communicate magnetic information to the brain. The possibility exists.”

The connections between light, cryptochrome and a magnetic sense were laid out by Klaus Schulten and Thorsten Ritz in 2000, in a bravura paper that united biology and quantum physics. They suggested that when cryptochrome is struck by blue light, it transfers one of its electrons across to a partner molecule called FAD.  Electrons normally waltz around in pairs, but thanks to the light, cryptochrome and FAD now have lone electrons. They are known as a “radical pair”.

Electrons also have a property called “spin”. In a radical pair, the spins of the two solo electrons are linked – they can either spin together or in opposite directions. These two states have different chemical properties, the radical pair can flip between them, and the angle of the Earth’s magnetic field can influence these flips. In doing so, it can affect the outcome or the speed of chemical reactions involving the radical pair. This is one of the ways in which the Earth’s magnetic field can affect living cells. It explains why the magnetic sense of animals like birds is tied to vision – after all, cryptochrome is found in the eye, and it’s converted into a radical pair by light.

Several experiments in the past few decades have support Schulten and Ritz’s theory. Foley’s work also seems to fit – human cryptochrome can support a magnetic sense in flies, in a way that depends on blue light. But Wiltschko thinks that using the human protein is a red herring. “All cryptochromes should be light-sensitive and since they form radical pairs, they should be sensitive to magnetic fields. The authors are describing intrinsic properties of cryptochrome. Using human cryptochrome is a nice gag!”

Indeed, Reppert says, “Of all the cryptochromes one could think of, the human one seemed the most interesting. We thought that if it did work, it might reignite some interest in magnetoreception in humans, which has waned down to virtually nothing.”

The current consensus is that humans cannot sense magnetic fields. Birds can do it, as can bats, turtles, ants, mole rats, sharks, rays, and more. Recently, Czech scientists have suggested that foxes, cows and deer also have the same ability. But look at all the recent reviews in this field, and you’ll see very little mention of our own species. A decade ago, a German group showed that our vision is slightly more sensitive in some directions than in others, but the results have not caught on.

It wasn’t always like this. In the 1980s, Robin Baker from the University of Manchester carried out a series of experiments which seemed to show that humans could sense magnetic fields. He took busloads of blindfolded volunteers on winding journeys for several kilometres before asking them to point their way back home. They did so more often than expected, and if they wore magnets on their heads, their accuracy dropped.

The results were published in Science and you can read Baker’s own description of his study in this 1980 issue of New Scientist. He even wrote a book about it. At the time, Baker said, “Whatever the repercussions, we have no alternative but to take seriously the possibility that Man has a magnetic sense of direction.”

Unfortunately, the main repercussion was a fierce series of rebuttals. Over the next decade, several groups around the world failed to repeat Baker’s results, even though Baker himself had no problems in doing so. He argued that their failure could have been due to local magnetic anomalies or brief changes in the strength of the magnetic field due to solar activity.

An American duo – Gould and Able – charitably suggested that Baker’s British students “either had cues available to them which were absent in our experiments, or are dramatically better than Americans in using whatever cues may be involved.” Max Westby and Karen Partridge, who failed to replicate Baker’s results in Sheffield, were less kind. “Perhaps it depends on which side of the Pennine Hills the experiments are conducted?” they asked. “It is obviously extremely difficult to counter all conceivable explanations for a negative result but we are forced to wonder about the ecological importance of a magnetic sense, the existence of which is so difficult to demonstrate.”

In the end, Baker relented and he moved on to the science of sperm. When I talked to him about the new study, he confesses that he hasn’t kept up with the field. “I’d spent nearly a decade, tested thousands of people under all sorts of conditions, and had absolutely no doubt. Then people did a few tests here and there and claimed the experiments didn’t replicate,” he says. “Even after I’d collected everybody else’s results and published that taken together, they did in fact constitute successful replication, nobody wanted to know. There was an element of ‘Sod them, then’.”

Reppert thinks that Baker’s story was an unfortunate one, especially since he stopped just when others were starting to discover light-based magnetic sensors. “I think Baker’s work was very good work but a lot of people had trouble reproducing aspects of it,” says Reppert. “It’s just very hard to do these sorts of behavioural experiments in humans.”

Magnetoreception has to be one of the hardest of all animal senses to study. Thorsten Ritz says, “Basic things that you do in other senses don’t make sense when it comes to magnetoreception. Almost every other sense is linked to an opening in bone structure – eyes, ears and so on. The magnetic sense could sit anywhere in the body because the magnetic field penetrates the body.”

To complicate matters, we don’t really know what a magnetic sense would be used for. For birds and turtles, it seems obvious that an internal compass would help them to navigate over long migrations. But that doesn’t really apply to humans, and we know that lost humans tend to go round in circles when other landmarks are unavailable.

But navigation isn’t the only use for a magnetic sense. Recently, John Philips has suggested that animals could use magnetic fields to estimate distances over much smaller scales. Indeed, it’s possible that foxes could use a magnetic range finder to gauge the distance of their pounces, when their prey is hidden by snow.

It’s clear that magnetic senses will remain alluring and controversial for many years to come. Baker has left the field behind, but he is still intrigued by it. “I would be really thrilled if somebody managed to vindicate those ten years of work, because I still have no doubt that there is a real phenomenon there,” he says. “This new paper is a very long way from being vindication, but just to read somebody saying that human magnetoreception deserves another look did give me a brief surge of satisfaction.”