Humans as the aquaphilic ape 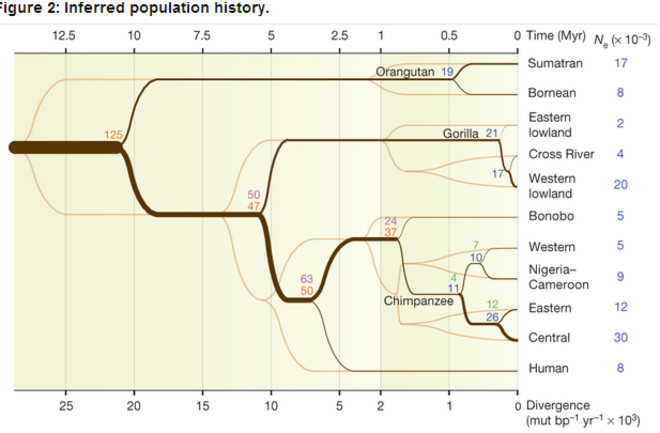 Credit: Nature (2013) doi:10.1038/nature12228 Every now and then I'm asked about the 'aquatic ape hypothesis'. My standard response is that there's nothing to see, and everyone should just move on. But reading a new (open access) paper in Nature, Great ape genetic diversity and population history, it crossed my mind again. The reason is this section of the legend of figure 1, "The Sanaga River forms a natural boundary between Nigeria–Cameroon and central chimpanzee populations whereas the Congo River separates the bonobo population from the central and eastern chimpanzees." I knew of the latter division. The former was novel to me. In fact I'd never even heard of the Sanaga river prior to this paper. Though the Congo seems clearly a significant geological and hydrological entity, I'm not quite so sure of the Sanaga. The division between the chimpanzees of Nigeria-Cameroon and those of the western Congo region may be one with an overdetermined number of causes.

Nevertheless, taking these riverine features as a given parameters in generating allopatric speciation and subspecies level differences, I am struck by the contrast between ourselves and our cousins.

In particular, the phylogeny above seems to imply that bonobos and common chimpanzees diverged on the order of ~2 million years ago, while the Nigeria-Cameroon population separated from the western Congo population ~500,000 years before the present (depending on the method of inference you rely on, though the qualitative insight here is preserved even if you switch them around). Though it took H. sapiens sapiens to break out of the world island of Afro-Eurasia, even our erectine cousins pushed on toward the southeastern extremities of Eurasia over 1 million years ago. It seems then that our savanna ape lineage is characterized by the behavior of wander lust and lack of fear of water.

Overall this paper is important because it has reasonable coverage in terms of genomes (hitting a genome at the same putative marker more than 10 times) and populations (sampling a wide array of subspecies from the great apes, N = 79). In the future this sort of analysis will probably be ho-hum, slicing apart a rich data set with a Swiss army knife of statistical genomic analytic techniques (see the supplementary PDF). If you are interested in the complex population history of chimpanzees this paper is for you, as it explores changes in population sizes and admixture and gene flow. For me there are two big results which are of particular importance. First, they did not find that loss of function substitutions were enriched in the human lineage. This matters because geneticists are still poking around for the "gene(s) which made us human." Or perhaps more charitably the evolutionary processes specific and distinctive to our species which results in our uniqueness. I don't deny we're a unique species, but it seems that though this quest will continue for a while longer. That's because

it may be that there is nothing singularly unique about our genetics or our evolutionary origins.

In fact I wouldn't be surprised if researchers conclude that there were general trends which applied to all of Homo over the past 2 million years, rather than the subset of Homo who are the ancestors of all the living humans today (since other lineages went extinct). Second, notice how varied the range of genetic diversity for other Hominidae is. This has been moderately well known for a while, but the chestnut of wisdom that humans are particularly genetic homogeneous as far as great apes goes suffers from the problem of aggregating different populations and taking the average. The range of heterozygosity in chimpanzees is huge. Some human populations are actually more genetically diverse than several of the other ape populations. Additionally, notice the rather deep population divergences of these ape subspecies. The bonobo-chimpanzee split occurred as Homo came into being, but among the common chimpanzee subspecies the lineages began to diverge at about the same time as archaic Homo populations. In plain English it seems that population structure with the same time depth as that of the Neandertal vs. African human is present among common chimpanzees. In the near future this sort of analysis will branch out to other mammalian taxa. But as usual, apes first, and others later.