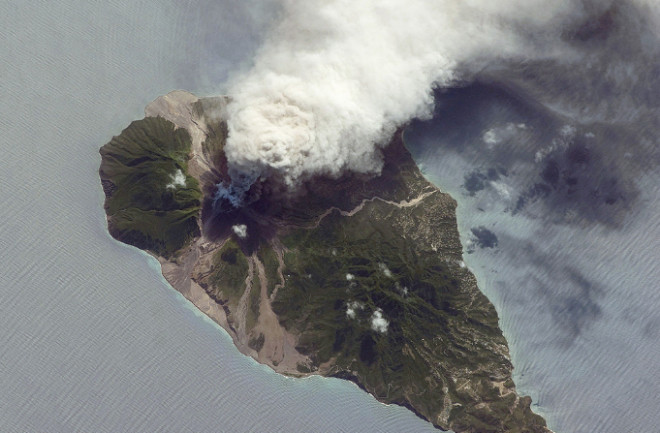 Volcanic plume from Soufriere Hills on Montserrat, seen from the ISS on October 11, 2009. (Credit: NASA)

Carbon dioxide! Little did we realize 100 years ago how this simple gas would become such a cultural lightning rod. Yet here we are, in what might be an existential fight focused on how much carbon dioxide humans pump into Earth’s atmosphere. It isn’t a little bit, either. No, humans might now be the gold standard in carbon dioxide emissions in the history of the planet.

Let’s get a few things straight: Carbon dioxide has been around since the planet formed. It has been part of our atmosphere in varying concentrations and appears to play a profound role in how the planet’s climate varies over time.

The Earth is actually chock full of carbon (the ultimate source of carbon dioxide). New work by the Deep Carbon Observatory estimates that the planet holds over 1.8 billion gigatonnes of carbon. That number is hard to fathom, but when you think about all the carbon locked in rocks and minerals, it is still less than 0.1% of the planet’s mass as a whole.

Now, around 80 percent of that carbon is trapped within the planet, leaving only 20 percent at/above the Earth’s surface — and most of that is in the deep ocean. Just 1.4 percent of all surface carbon resides in the atmosphere.

However, carbon (in the form of carbon dioxide) can be released from the Earth’s interior passively and catastrophically. On average, volcanoes globally release around 0.28-0.36 gigatonnes of carbon dioxide per year. That might seem like a lot, but as you’ll see … it’s not. It is the background noise of carbon dioxide these days (and no, volcanic activity is not increasing).

Some catastrophic natural events can release huge amounts of carbon dioxide as well. Flood basalt provinces, where tens of thousands of cubic kilometers of basalt lava are erupted over millions of years, can release in the neighborhood of two gigatonnes of carbon per year when active. Examples of these are the Deccan Traps in India and Siberian Traps — both of which may be implicated in past mass extinctions.

Another massive natural event that can release copious carbon dioxide from the Earth’s interior is an asteroid impact. The Chicxulub impact that killed the dinosaurs may have released 425-1,500 gigatonnes of carbon dioxide into the atmosphere.

Both of these catastrophes led to a rapidly warming global climate and oceans that were much more acidic thanks to increased carbon dioxide in the atmosphere — a recipe for extinction. Some of the extinctions related to these disasters may have wiped out 75-90 percent of all life on Earth.

Carbon on Earth can be recycled. The weathering of rocks can trap carbon back into the subsurface. So can subduction of the ocean crust back into the mantle, as well as the burial of organic material. Yet, these processes are a long-term cycle of millions of years. We are taking that buried carbon and prematurely throwing it back into the atmosphere and the long-term cycle can’t keep up.

So, that’s where we are. We are changing the carbon dioxide in the Earth’s atmosphere more significantly than massive natural events we know are associated with mass extinctions. Our biggest challenge is how we might be able to adapt to the planet we, as humans, have profoundly changed. Ignoring it just makes us the new dinosaurs in the face of that asteroid from space.