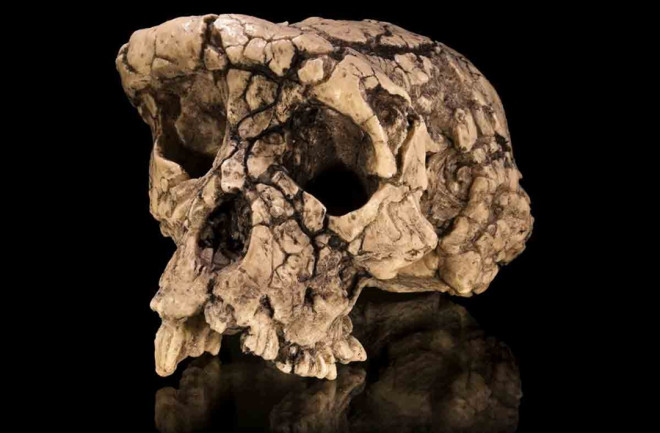 The partial skull and jaw fragments of Sahelanthropus tchadensis are the earliest hominin finds known. (Credit: Didier Descouens/Creative Commons 4.0) Roughly 8 million years ago, some apes stood up and started human evolution. Okay, that’s not really what happened. But it is a fair characterization of the way scientists identify the oldest fossils likely to be human ancestors. Upright walking apes mark the start of the study of human evolution in many texts and classes. That’s because bipedalism, or two-legged locomotion, was the first major evolutionary change in human ancestors, which is evident from bones. Other distinguishing features, like big brains, small molars and handcrafted stone tools, came millions of years later. Therefore, to find early members of our lineage, anthropologists look for ancient apes with skeletal traits indicative of habitual bipedalism — they regularly walked upright. So who were the first bipedal apes and would you recognize them as relatives?

Homo sapiens and our closest living relatives, chimpanzees (Pan paniscus and Pan troglodytes), both descend from the same stock of African apes. Researchers often call this creature the last common ancestor or LCA (go back far enough and you’ll have an LCA with every organism on earth, but when anthropologists say “LCA” they’re usually referring to the chimp-human one). Sometime between 6 and 9 million years ago that population split into two lineages — one eventually leading to chimps and the other leading to humans. Hominins are any living or extinct species along the human branch after the LCA. So-called "panins" are any species along the chimp branch after the LCA.

A chimpanzee gazes into the forest canopy in Uganda. (Credit: Anton_Ivanov/shutterstock) We can estimate how long ago this panin-hominin split happened using the DNA differences between living humans and chimpanzees and a “molecular clock” rate of genetic change over time. Logically, the LCA should be slightly older. And while these results tell us the LCA’s approximate age, no one has ever found fossils from this elusive population, and probably never will. Their skeletal remains probably wouldn't preserve, assuming the creatures lived in tropical forests, as most living apes do today. The same goes for the original hominins, immediately after the split. But if scientists were to find fossils from this era, it would be difficult to determine whether they represented the LCA, panins or hominins. It’s likely these creatures were physically quite similar, especially their bones.

Within a million years or so after hominins split onto a separate evolutionary trajectory — a relatively short amount of evolutionary time — they started traveling around on two legs, rather than four. This new locomotive strategy came with some obvious changes in skeletal anatomy. Scientists have spotted bipedal traits in three fossil species that lived between 5 and 7 million years ago: Sahelanthropus tchadensis, Orrorin tugenensis and Ardipithecus kadabba. Each of them lived a few million years before Australopiths like the Lucy fossil, who undoubtedly were upright walking hominins.

An artist’s reconstruction of Lucy. The most famous Australopithecus afarensis, a species likely ancestral to our own, appears to have died from injuries sustained in a fall, according to new research. The study reignites an old debate about how the early hominin lived. (Credit: Wikimedia Commons.) Let’s focus on the oldest of the three and the top contender for earliest-known hominin, Sahelanthropus, estimated to be 6.8 to 7.2 million years old. Remains from this species were unearthed between 2001 and 2002 by a team led by French paleontologist Michel Brunet. The scientific name Sahelanthropus tchadensis refers to the location of its discovery: in Sahel, the dry region south of the Sahara, and Chad, the country in central Africa. Although today the area is a barren scape of sand dunes, when Sahelanthropus lived it seems to have been a lakeside woodland, based on other animal fossils found in the same deposits, including monkeys, crocodiles and fish. Still, the location is surprising considering most early hominins come from the East African Rift Valley, over 1,500 miles away. It shows that our ancestors were more widespread at this time than previously thought, if Sahelanthropus is indeed a hominin. The finds included several teeth, four lower jaw fragments and a crushed skull, which was later virtually reconstructed. In many ways these bones look like an ancient ape. Most obviously, the brain is a mere 360 to 370 mL, roughly the size of a chimpanzee. However, several features are hominin-like: The face is flatter, the canine teeth are smaller and the upper canines do not sharpen against the lower premolars (as they do in chimps).

Read more: Everything Worth Knowing About Human Origins

But, having only bones from the head, why do scientists think Sahelanthropus was bipedal? That brings us to the most relevant hominin-like feature, the position of the foramen magnum. This is the hole in the skull for the spine. In four-legged primates it’s found near the back of the head. In two-legged hominins, including Homo sapiens, it’s at the base of the skull, forming a near-right angle with the eye sockets. Both anatomies allow animals to point their eyes straight ahead without straining their necks, in the respective quadrapedal or bipedal stances. You guessed it. The foramen magnum of Sahelanthropus is positioned like a hominin, suggesting the species spent more time on two legs than four. But before you go honoring Sahelanthropus as your great-great… great grandparent, keep in mind two caveats. First, the species could be a hominin without being a direct ancestor of Homo sapiens. Rather, it could belong to a hominin side-branch that died off without continuous descendants to present-day humans. Second, while many scholars

include Sahelanthropus as a bipedal hominin (or at least a "putative" one), some researchers

. Among other critiques, they argue that proving bipedalism requires lower limb bones, like the pelvis and femur. Allegedly a femur was found along with the skull (here

), although it has not been published. The remains remain to be seen.