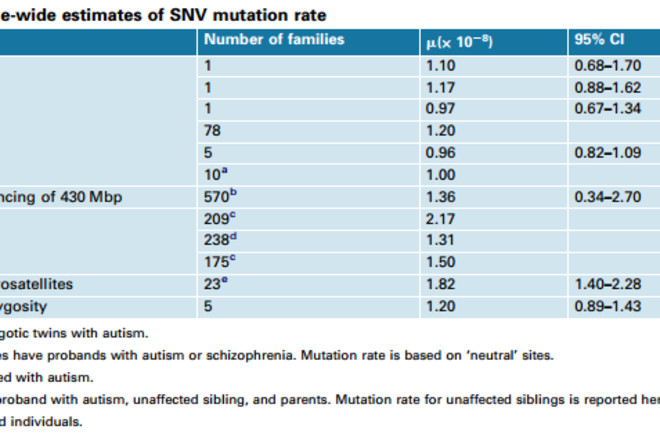 Credit: Campbell, Catarina D., and Evan E. Eichler. "Properties and rates of germline mutations in humans." Trends in Genetics (2013). What a great age we live in. Until recently critical parameters in population genetics such as mutation rates had to be inferred and assumed, even though they served as bases for much more complex inferences. Now with humans (and humans are only the beginning!) much of what was inferred is being assessed in a more direct fashion. Caterina Campbell and Even Eichler have a review in Trends in Genetics which surveys the field as it stands now, Properties and rates of germline mutations in humans. Notice that there's a rough convergence using pedigree analysis of a mutation rate in the low 10^-8 range. Additionally, it does seem that a disproportionate number of novel mutations come through the paternal lineage via sperm. This should increase our moderate worry about older fathers (something reiterated in the piece, with caveats). Finally, the authors suggest these results are a floor for the mutational rate, in part due to the long term conflict with the inferred 'evolutionary rates,' which are higher. This matters because to infer the last common ancestors between lineages the value of the mutation rate is obviously critical. To me the obvious 'killer app' which derives from the understanding of mutations

are analyses of pedigrees in terms of accretion of de novo mutations.

With precise and accurate coverage of a whole pedigree you could theoretically perform a pre-implantation screening of a set of embryos and select exactly those you adduce to have received the lowest fraction of accrued mutations from the generation of the grandparents down. This isn't rocket science, but simple comparison and counting. Spontaneous abortion rates on the order of ~50% set a floor on human many mutations viable offspring can carry (most aneuploidies are aborted), but it seems like we may be able to set the floor a bit higher.