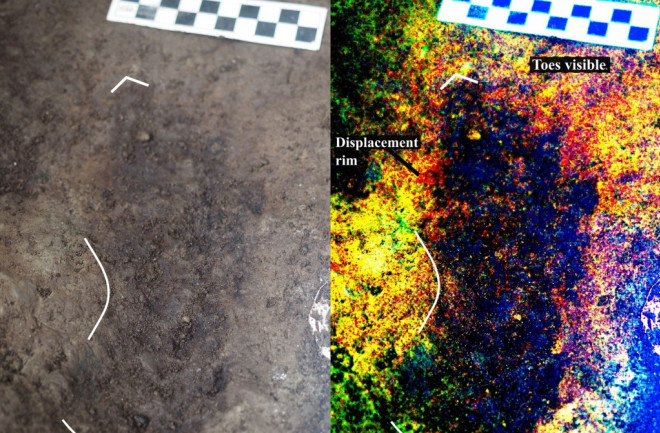 Human footprints such as this one, known as Track #17 and digitally enhanced on the right, suggest people were walking along North America's Pacific Coast 13,000 years ago. (Credit Duncan McLaren) Nearly 30 human footprints from at least three different individuals, found at a remote island off Canada's Pacific Coast, could be the latest evidence that people arrived in North America by sea. At about 13,000 years old, the tracks pre-date the end of the last ice age. Ancient trackways have provided valuable information about the presence and physical traits of humans and other hominins, and they've occasionally stirred up controversy. Today, researchers describe 29 human footprints along the shores of Calvert Island, off the coast of British Columbia, that appear to be about 13,000 years old. It means humans were walking around the area before the end of the last ice age, generally clocked at about 11,700 years ago. According to the researchers, during the period 11,000-14,000 years ago, sea level at this spot on Calvert Island was up to ten feet lower than it is today. By the way, understanding sea level during the last ice age is not as simple as saying "It was XX feet lower everywhere." Generally, in much of the world, sea level was nearly 400 feet lower than it is today. However, it was a much more localized story in the higher latitudes where glaciers were actually present, including what is now Canada's West Coast. For a number of reasons, including the location and density of the glaciers, which can deform the land, the sea level today may be significantly higher or lower, sometimes by hundreds of feet, than it was at the end of the Pleistocene epoch, depending on the exact locality.

A close up of Calvert Island and the current coastline of the Canadian Pacific, paired with bathymetric information: Black represents a depth of 1,000 meters or more. (Credit McLaren et al after imagery from Sci Tech and the Living Oceans Society) In fact, a lot of archaeological research along the Canadian Pacific Coast, a remote stretch with few roads but thousands of islands, is currently focused on understanding what the area looked like as the ice sheets began to recede. The researchers who found the footprints weren't even looking for them: They were out in the field testing different methods of determining whether a site was a good candidate for archaeological excavation. The team found the footprints as they explored layers of intertidal beach sediments, a favorable environment to find trace fossils — also known as ichnofossils — including human trackways. Coastlines are great places to look for ichnofossils because the fresh sediment is soft enough to capture a detailed impression of the foot that can preserve not only anatomical traits but also elements of the individual's gait. The prints preserved at Calvert Island are detailed enough to see a clear arch and, in many cases, toes. The high quality of the impressions allowed the team to determine they were human footprints rather than those of a bear or other animal. While the three individuals making the tracks were barefoot, their modern US shoe sizes would have been a junior size 8, a woman's size 3 (or a junior size one), and a man's size 7-8 (or a woman's size 8-9), according to the study. That means at least one of them was likely a child. Ice, Ice Maybe At the height of the last ice age, although the Cordilleran Ice Sheet covering much of western Canada extended all the way to the Pacific coast in many spots, there were isolated pockets of exposed coastline at various points in time. Beginning about 19,000 years ago, some of these pockets increased in size and, according to faunal remains found previously, were home to a range of animals that would have made a target-rich environment, as they say, for humans.

Approximate positions of the Cordilleran and Laurentide Ice Sheets before the big melt for those who, like me, enjoy maps. (Credit Creative Commons) The Manis mastodon site on Washington State's Olympic Peninsula, for example, has been dated to about 13,800 years ago and strongly suggests not only a human presence, but that humans were hunting the massive animals successfully. At a number of these late Ice Age archaeological sites, some of the artifacts uncovered, including fishing gear, indicate the people who used them had some form of watercraft. And back at Calvert Island, the non-linear pattern of the footprints found, occurring at what would have been shoreline, suggests individuals possibly disembarking from a boat, although the researchers point out this is speculation for now. The team did note that, based on the number of prints found in an area of less than 90 square feet, they expect there are many, many more prints to be found in as-yet-unexcavated shoreline adjacent to the current dig. In fact, they believe the layers already exposed contain a number of other human footprints that were too degraded to analyze. Fun fact: Calvert Island, where the tracks were found, is just a few miles south of Triquet Island, which made news in 2017 for artifacts and other signs of human settlement that are up to 14,000 years old. Discoveries at both sites reflect the field's growing focus on the likelihood that the first humans to explore North America came not overland but via a maritime Kelp Highway. And if you want to read more about different disciplines contributing to the growing body of evidence for an initial migration to North America by coastal travel rather than overland, check out some recent glaciology research. Today's study is open-access and was published in PLOS ONE, so have at it. In fact, I urge you to check it out, even if you don't feel like reading it. The illustrations of the human footprints convey a sense of the lives of the people that once stood, walked around and even slipped on the ancient beach.