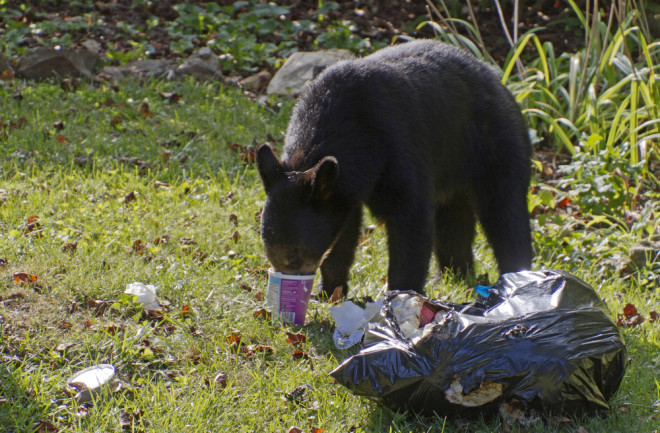 Because they can eat human food all year long, bears are finding less of a reason to hibernate during winter, when food is normally scarce. Now, researchers say reduced hibernation is accelerating cellular aging in bears. (Credit: J. Bicking/Shutterstock)

Bears with diets that are based largely on human food are hibernating less, which is causing them to age quicker biologically, according to a new study published in NatureScientific Reports.

A research team tracked 30 black bears near Durango, Colo., between 2011 and 2015, paying close attention to their eating and hibernation habits. The researchers found that bears who foraged on human food hibernated less during the winters — sometimes, by as much as 50 days — than bears who ate a natural diet.

The researchers aren’t sure why human food is causing bears to spend less time in their dens. But they say shorter hibernation periods are accelerating bears’ rates of cellular aging. Using blood and hair sampling, the researchers found bears with briefer hibernations had shorter telomeres, the protective caps on chromosomes that wear away over time.

Previous animal studies have found the metabolic changes that occur during hibernation may slow down telomere shortening, and it could explain why some animals live longer than others.

Black bears in Colorado typically enter hibernation in early November when food becomes scarce. In early May, the bears emerge from their dens in search of food again. Year-round access to human food, however, is disrupting their normal hibernation and foraging patterns. Because bears can eat whenever they want, they are finding less of a reason to retreat to their dens and wait out the winter.

The result is less time spent hibernating and more time spent aging. Traditionally, black bears feast on fruits, nuts, insects, and small mammals. But they are opportunistic omnivores who will snack on food wherever they can — including from garbage cans and dumpsters.

In a previous study, the research team found human food can make up as much as 30 percent of bear diets. Most of us are aware of the obvious impacts of human activity on wildlife ecology, such as habitat loss when new development happens. But this study sheds light on an effect that's less obvious.

“Human food resources that are increasingly ubiquitous on the landscape can have really important ecological outcomes," Pauli says. "High levels of human food resources, especially in urban or suburban areas, can really rearrange how species behave and interact.”

Researchers don't know if bears are living shorter lives because of accelerated cellular aging. However, scavenging for food has been tied to increasing numbers of human-bear conflicts. Colorado Parks and Wildlife reported that people kill more than 1,000 bears a year.