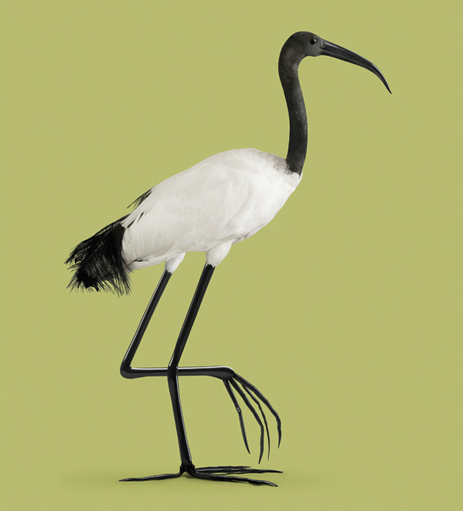 UK-based photographer Vincent Fournier collaborated with scientists to create his digitally enhanced photographs of genetically modified animals better suited to the extreme climates of our changing environment. Starting with a taxidermy sample, animal geneticists explained species evolutionary processes. Fournier then imagined how they might evolve, creating a veritable Noah's Ark of creatures made to last; super-smart rabbits, armored mammals with metallic scales, owls with digitally enhanced memory, a seven-foot jumping beetle, a banana-flavored orchid, and frost-resistant ibis with long claws enhanced with silicon-28 (ABOVE). Dr. Agnes Ricroch, a French scientist and professor at Penn State University whose areas of research include genetic modification and bioethics, wrote the legends describing the organisms (animals, plants) and their new traits and how they could have been engineered, as well as their new Latin names. Dr. Ricroch created the species name by imagining the Latin name that fit best with the engineered trait, and used it along with the real genus name, as with the ibis above, Passeridae temperatio. She reflected on what synthetic biology and genetic engineering might mean in the future:

You can see more images from the photography project, Engineered Species, on Fournier's website.