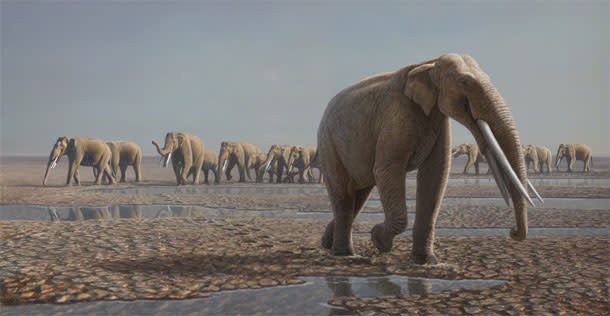 In the desert of the United Arab Emirates, there is an unusual series of flat discs imprinted in the sand. Each one is about 40 centimetres wide, and they snake off into the distance in several parallel lines, for hundreds of metres. They are tracks. They were made by a herd of at least 14 early elephants, marching across the land between 6 and 8 million years ago. The track-makers are long dead, but in the intervening time, nothing has buried their tracks or eroded them away. Today, their social lives are still recorded in their fossilised footsteps. The site, known as Mleisa 1, providesthe oldest evidence for proboscideans – elephants and their close relatives – living in a herd. Covering the area of seven football fields, it’s also probably the largest fossil trackway ever discovered, for any animal. When these beasts strolled across the landscape, the entire area would have been cut through by a river system. Rather than the dry sand of today, it would have been lush and green. “It's really an amazing site,” says Brian Kraatz from the Western University of Health Sciences, who was involved in the study. “I wish we had the ability to transport people there so they can stand in the middle of it at sunset. You can't help but find yourself looking around to see if you can catch a last glimpse of the herd trotting off.” 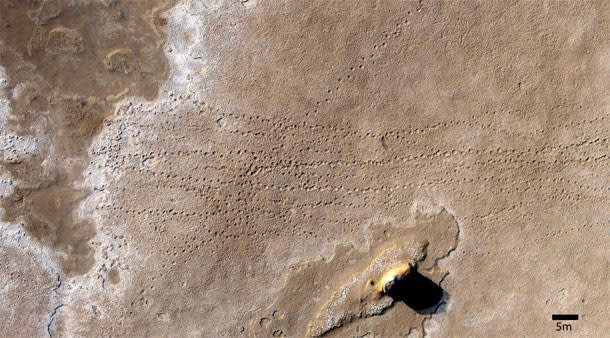 There are many fossils of prehistoric elephants that show how their bodies evolved from smaller ancestors. But elephants are much more than just tusks and trunks. They have rich social lives, full of empathy, and their behaviours haven’t fossilised as well. We know that some elephants, like the mammoth and mastodon, spent some of their time in groups, thanks to the occasional trackways and mass graves. But the Mleisa 1 site offers much clearer evidence. Studying it wasn’t easy. The site is too massive to photograph from the ground, but the individual prints are too small to show up on satellite images. To accurately map the trackways, Nathan Craig from Pennsylvania State University attached a small pocket camera to a kite and snapped a set of overlapping images from above. He stitched the images together into a single large mosaic, which you can see on Gigapan. By calibrating the aerial mosaic with measurements taken on the ground, the team could study the herd’s footsteps from the air. Faysal Bibi from the University of Poitiers (who worked on the Ardipithecus skeleton) says that the tracks include the footprints of at least 13 individuals, all marching in a straight line. They’re tightly spaced with very few intersections or overlaps, and small variations in direction. Together, they show a herd of early elephants jostling, interacting, and moving together. There was a mix of sizes and ages, as shown by the varying lengths of the animals’ strides and the sizes of their feet. One of them was probably a calf. Meanwhile, the prints of a single large individual cut across those of the herd. At 260 metres, it’s the longest continuous fossil track ever found. Judging by the size of the prints, this loner was likely an adult male. He was moving in a fairly straight line, and at a slower and steadier speed than the herd. And he probably never met them, for his track was laid down at a separate time. Together, these tracks suggest that these ancient elephants were both social and solitary, much like today’s representatives. Modern elephants form stable families, led by the eldest female – the matriarch. The males, which are larger, are raised by the families until they reach adolescence. Then, they strike out on their own., only rejoining a herd when it’s time to find a mate. That’s what Bibi saw in Mleisa 1 – a herd of elephants of the same size as a modern family, and a large male who walked alone. It’s not clear which specific elephant made the tracks, but it certainly wasn’t any of the three species alive today. The most likely candidate is an extinct four-tusked animal called Stegotetrabelodon syrticus. It was the most abundant proboscidean in the area, and the most likely one to be found in open country. Reference: Bibi, Kraatz, Craig, Beech, Schuster & Hill. 2011. Early evidence for complex social structure in Proboscidea from a Late Miocene trackway site in the United Arab Emirates. Biology Letters http://dx.doi.org/10.1098/rsbl.2011.1185Images: reconstruction by Mauricio Antón.