How We Know Ancient Humans Believed In the Afterlife 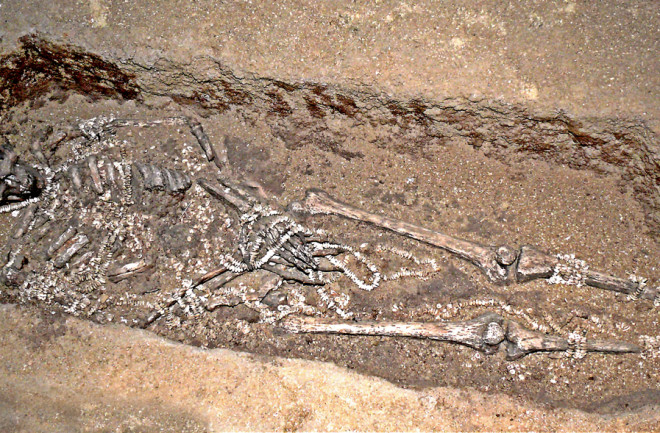 Some 34,000 years ago, two boys and a middle-aged man were buried in fantastic style. They were laid to rest wearing over 13,000 mammoth ivory beads, hundreds of perforated fox canine teeth and other adornments. Discovered in the 1960s, at the site of Sungir, Russia, the burials also contained spears, figurines and the hollowed out shaft of a woman’s femur, packed with red ochre. Archaeologists estimate the ivory beads alone would have taken 2500 hours of labor to produce.

We’ll never know what particular beliefs these ancient people held. But such elaborate, time-intensive burials strongly suggest they conceived of an afterlife and spiritual forces. It’s something that we see today in nearly every culture on Earth, and it’s usually tied to religious practices and beliefs. In fact, archaeologists often use graves like these as a rough marker for the emergence of religion in human societies. The evolutionary origins of religion is a big topic, so let’s just focus on this one component: concern for the dead and the afterlife. When did human ancestors begin to invest in the dead?

Evolutionary speaking, devoting energy or resources to dead members of your species doesn’t seem very worthwhile. But it’s done, to a limited extent by chimpanzees, our closest primate relatives. Chimp mothers have been observed carrying their dead infants for weeks. Some researchers contend this stems from the intensity of their mother-infant bond, while others propose it’s a “better to be safe than sorry” strategy, to avoid abandoning seemingly dead, but actually living offspring. However, overall, chimp treatment of dead conspecifics is highly variable, ranging from cannibalism to care.

To get from animal-like responses to death to the funerary behaviors of contemporary humans, in a Proceedings of the Royal Society B article, archaeologist Paul Pettitt proposed four evolutionary stages.

“The first of these is purely chemical,” he says. “A chemical stimulus tells a part of your brain that it’s not good to have that corpse rotting away, so you do something about it.” Many animals, including insects, detect necromones (like hormones, but emitted from decomposing organisms) and respond by avoiding, eating or even burying corpses. The second stage of emotion — being upset by a particular individual’s death — is exhibited by numerous social species like birds, elephants and primates.

Reconstruction of a Neanderthal buried in Kebera Cave, Israel about 60,000 years ago (Credit: Bridget Alex)

But humans are probably unique when it comes to the third stage, what Pettitt calls rationalization. This is, “cognitively speaking, the most exciting stage in the evolution of mortuary activities,” says Pettitt, a professor at Durham University in England.

It entails understanding that death is inevitable, that all organisms will die, including oneself. According to Pettitt, this understanding leads to rationalization, or attempts to explain death and in many cases overcome it through beliefs in the afterlife.

“We can’t stop [death] in the biological sense but we can deny it by coming up with all these weird and wonderful ways we’ll continue to exist,” says Pettitt. “Many of the great religious systems in the world effectively act as mechanisms for denying death.”

Lastly, came cultural elaboration, the appearance and diversification of funerary practices according to particular cultures and belief systems. How to handle the dead became governed by norms and laws, specific to each society — what we’re accustomed to today, when it comes to death.

Ancient Notions of the Afterlife

The above is a theoretical model for how, through a cumulative process, behaviors surrounding death could evolve from what we see in other animals to what we see in humans today, across all cultures. I’ve omitted details and nuances, but even simplified, the four stages are useful for trying to understand the archaeological record of mortuary practices across human evolution.

In all likelihood, the ~34,000-year-old Sungir burials were created by people with spiritual beliefs and “modern” funerary behavior. Ancient peoples likely ceremonially disposed of dead bodies in other ways, as well, like drifting them out to sea, which would leave no traces for archaeologists to discover millennia later. But rich graves like Sungir at least provide a minimum age for funerary rituals.

Before that, between 40,000 and 130,000 years ago, there are about 30 cases of deliberate burials widely accepted as such by archaeologists. They’ve been found in Europe and the Middle East, and are not just restricted to Homo sapiens. Our evolutionary cousins, Neanderthals, also interred their dead during this timeframe at sites like La Ferrassie, France and Shanidar, Iraq.

Although most archaeologists agree these are burials, they disagree over their significance. Pettitt warns against thinking, “Oh look, burial! That’s exactly what we did to Auntie May.”

“Sure it’s a burial… but perhaps containment might be a far better term,” he adds. It may have been more about hygiene than spirituality.

A skull and vertebrae bones from a hominin found in the “pit of bones,” Sima de los Huesos, Spain (credit: Javier Trueba/msf)

The burials from this period were “remarkable in their true simplicity and consistency,” writes archaeologist Mary Stiner. Dead individuals were placed in shallow pits, in the same areas where the living were, well, living. The skeletons were sometimes found with stone tools and animal bones, but these may have been garbage used to fill the pits, rather than precious offerings like the 13,000 mammoth ivory beads.

Still, Stiner and others have argued that the act of burying people within residential areas indicates lasting concern for the wellbeing of the dead. These simple burials could reflect Pettitt’s third stage, rationalization. The Neanderthals and Homo sapiensresponsible may have tried to stay connected with the dead by burying bodies in known spots.

Earlier still, there are sites with large accumulations of bones from hominins, species on the human family tree after it split from the chimpanzee lineage. The fossils are deep within caves, which contain bones but no signs of daily life. In Spain, the site of Sima de los Huesos — “pit of bones” — is well named. It contained 430,000-year-old bones from at least 28 Homo heidelbergensis individuals, found in a jumble at the bottom of a 40+ foot vertical shaft. The only artifact recovered was a red stone handaxe, which archaeologists provocatively called Excalibur.

Similarly, in Rising Star Cave System, South Africa, archaeologists have unearthed fragmented remains of at least 15 Homo naledi individuals, dated to roughly 300,000 years ago, in a chamber that is preposterously difficult to reach, at least today.

The bones of at least 15 hominins were found in the Dinaledi chamber, deep within the Rising Star Cave system, South Africa (Credit: National Geographic)

In both cases, it’s hard to explain how so many hominin bones got into such deep recesses of the caves. Some researchers have argued they were ritualistically deposited, (here, here) implying spiritual beliefs as early as 430,000 years ago. However, most scholars are skeptical, favoring other explanations (here, here, here, here). Perhaps the individuals accidentally died in the caves or their bones were transported there by rushing water, carnivores or killers — a rival hominin group, rather than loving kin.