The Alaska Volcano Observatory recently raised the alert status of Makushin on the island of Unalaska. How does AVO know a volcano is restless when few are around to see it? 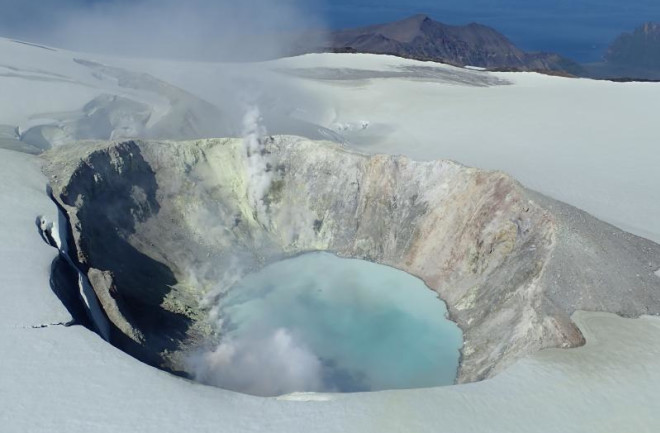 Out on the Alaskan island of Unalaska sits Makushin. This volcano is covered in a thick layer of ice and snow. And although it is not far — as the crow flies — from Dutch Harbor, it is extremely inaccessible. Yet, as part of its tasked mission, the Alaska Volcano Observatory must watch for signs that this volcano might be rumbling back to life.

Makushin is a volcano with a busy and sometimes violent history. The last known eruption from the caldera volcano was back in 1995; over the past few centuries, Makushin has produced at least a dozen blasts. Some of these eruptions were as large as VEI 3 (something close to the same size as the 2010 eruptions at Mount Merapi in Indonesia).

Go back far enough, and Makushin has generated even bigger eruptions, including a VEI 5 blast that created the caldera about 8,000 years ago. An eruption like that is more akin to Mount St. Helens in May 1980. This means watching for any restlessness at Makushin (and other Aleutian volcanoes like it) is important, both for people on the ground and for people flying over the region to Asia and back.

The view of Makushin in Alaska with Dutch Harbor/Unalaska in the foreground. The town is only 16 miles from the volcano. (Credit: AVO/USGS)

So, just how can we tell? The most common methods to remotely monitor a volcano look at how the ground is shaking and what is coming out the top. Seems pretty obvious, right?

Seismometers can be installed on these remote volcanoes, with data collected from them sent by radio or satellite back to AVO to be interpreted. Many times, these seismometers are installed during brief windows of “good weather” and are powered by deep cycle batteries or solar cells (more of the former in places like Alaska).

They need to be visited annually for maintenance or to be repaired if snow, ice, wind, bears or even people damage the instruments. It is best to have seismometers on the volcano you’re watching, but even more distant seismometers can record larger earthquakes happening at remote volcanoes.

Another common method that took off in the 21st century has been the use of webcams. You’d be surprised at how many volcanoes in remote locations have some sort of webcam pointed at them, possibly mounted with the seismometers or at ranger stations, or even from a distance with a clear view of the volcano. Much like seismometers, webcams need maintenance as well. The biggest problems with webcams are weather and night: You can’t see much if it’s cloudy or foggy ... or if it’s dark out, which happens a lot in the Alaskan winters.

We can turn to remote-sensing satellites to fill in some of those blanks. Satellite like NASA’s Terra and Aqua, the European Space Agency’s Sentinel-2, the U.S. Geological Survey’s and NASA’s LandSat fleet, and Planet Labs Inc.’s Doves are all Earth-observing satellites that can look for plumes from volcanoes that pierce the clouds. They can also look for the infrared signatures of lava domes. Even the weather satellites can get in the game, with GOES and Himawari catching plumes from their stationary orbits.

More specialized techniques have been used to look for signs of new activity at remote Alaskan volcanoes. Infrasound uses low-frequency sound that can travel thousands of miles. These deep booms are explosions that might be happening at a cloud-shrouded volcano far out in the Aleutian Islands. Even looking for bouts of volcanic lightning can help pinpoint eruptions.

Put these all together and suddenly we know a lot more about activity at these far-off volcanoes. That’s why AVO has raised the alert status to “yellow” (second-lowest of four levels) at Makushin. Over the past few days, seismometers at the volcano have picked up a number of M3-4 earthquakes under the volcano — a potential sign the volcano might be waking up from a few decades of quiet. Neither satellites nor webcams pointed at the volcano have seen any plumes, so no eruption has appeared to have happened so far.

However, once the signs start to appear, volcano-monitoring agencies like AVO need to get the word out so emergency managers can prepare. It might be for the towns near Makushin, like Dutch Harbor, or the airlines that fly over the area. Even so, this unrest is more than likely not leading to a new eruption — but it is much better to be too cautious than too cavalier when it comes to hazards. We can now see the signs much faster, and hopefully keep people safer.