How We Found the Dinosaur Doomsday Site 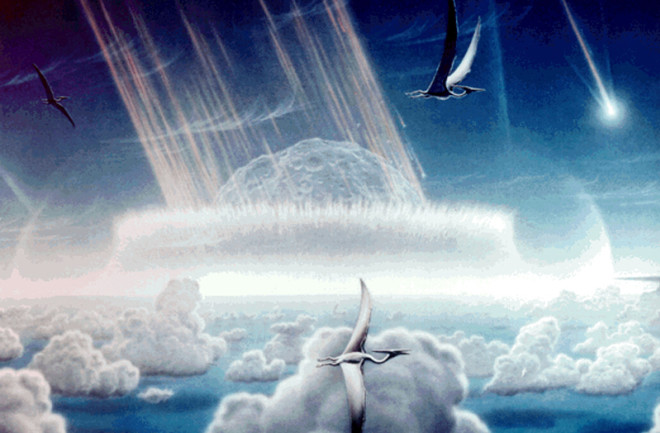 When the impact hit Mexico's Yucatan Peninsula 66 million years ago, it wiped out most life on Earth. (Credit: NASA) On March 22, 1991, David Kring stood at a podium at the Lunar and Planetary Science Conference in Houston and revealed the exact location of the most important impact event in the past 100 million years. The dinosaur-killing space-rock struck Mexico’s present-day Yucatan Peninsula near the town of Chicxulub. By that time, most geologists already accepted Luis and Walter Alvarez’s once-wild theory that a 65-million-year-old, worldwide layer of iridium — a material common in asteroids, but not on Earth — implied an extinction event. But for a decade, scientists had tried and failed to find the crater. That led many to assume an impact in the deep ocean, which might explain the absence of a bowl as big as Connecticut. Kring didn’t buy it. His gut told him the Mount Everest-sized space rock struck closer to land. The path to proving it started along the banks of the Brazos River in Texas.

Putting the Clues Together

In 1985, Jan Smit, a paleontologist at University Amsterdam, and A.J.T. Romein of the State University of Utrecht, published a summary of what was known about the Cretaceous-Tertiary event — the moment when most of Earth’s life died. Their lengthy report looked at evidence from around the world. But it was just one sentence in that 16-page paper that stood out to Kring. The paleontologists pointed to a thick layer of sandy sediment “This may be the first evidence of impact (tsunami)–triggered sediment,” Romein and Smit wrote. That set Kring searching for an impact crater in the western hemisphere. Scientists found the next clue in the Caribbean. Florida International University scientist Florentin Maurrasse spotted an unusually thick layer of iridium near Beloc, Haiti, that implied the dino-killing impact couldn’t be far off. And when American television producer Robin Bates flew out for a science show about the site, he returned with a sample for Glen Izett, a geologist with the United States Geological Survey, who was next on his interview list. Inside the sediment, Izett found tiny bits of glass. These so-called tektites are only found close to impact sites. “That told us that somewhere in the Caribbean there was a crater,” says Kring.

In the coming months, a scientific drilling operation will extract rock cores from Chicxulub's peak ring, something never before tried. Their results could help explain the events that followed the dino-killing impact. (Credit: David Kring) And it turned out that two geophysicists, Glen Penfield and Antonio Camargo, had already stumbled across ground zero on Mexico’s Yucatan Peninsula while looking for oil deposits. The pair wondered if the strange site was an impact crater or some kind of volcanic feature. “They saw a circular feature, and in the oil world circular deposits mean traps,” says Kring. “When petroleum geologists see something circular, they see oil and say, ‘I want to drill that.’”

Fortunately for Kring, the petrol hunters did exactly that. And when the pair shared the drill cores brought up from a site called Yucatan-6, it showed shocked quartz — the rocks were melted with the telltale signs of an extraterrestrial impact. Kring got to present the smoking gun at LPSC back in 1991, but he says the find was really the work of seven North American geologists.

On the ground, there are few signs of a mass-extinction event in Mexico's Yucatan Peninsula. But gravitational data reveals one of the largest craters in the inner solar system. (Credit: Virgil L. Sharpton, University of Alaska, Fairbanks) And after he finished his talk, one man stood up in the audience. It was esteemed astrogeologist Eugene Shoemaker, the leading expert on asteroid impacts and a scientist who prepped astronauts to travel to the moon. “You got it,” Shoemaker said. The other impact crater experts in the room that day bought the evidence as well. Later that night, a group gathered to plan the first scientific drilling operation at Chicxulub.

But to convince the larger geology community, Kring needed to tie the rocks recovered from Chicxulub to the rocks found in Haiti and conclusively date the impact crater. So, instead of heading to the impact site, he stayed in the lab. Over the next year, Kring was able to chemically link the sites. That scientific paper set off headlines around the world in 1992 and launched the word “Chicxulub” into the public vernacular.

The Chicxulub impact set off an airblast like a nuclear bomb that swept across much of North America, leveling forests. (Credit: David Kring) “Finding Chicxulub was incredibly important in understanding the post-impact environmental effects,” says Kring. “Many environmental consequences are a function of distance from the impact site. So you had to know the distance from the impact site before you could evaluate the fossil record anywhere in the world.” Chicxulub also allowed Kring and his colleagues to create a laundry list of specific environmental impacts. But scientists still don’t fully understand how global ecosystems collapsed, or exactly how they eventually recovered. In the coming weeks, a team of scientists will begin drilling Chicxulub’s central peak ring for the first time. Discover will be on site in Mexico as the team tries to answer some of those questions.