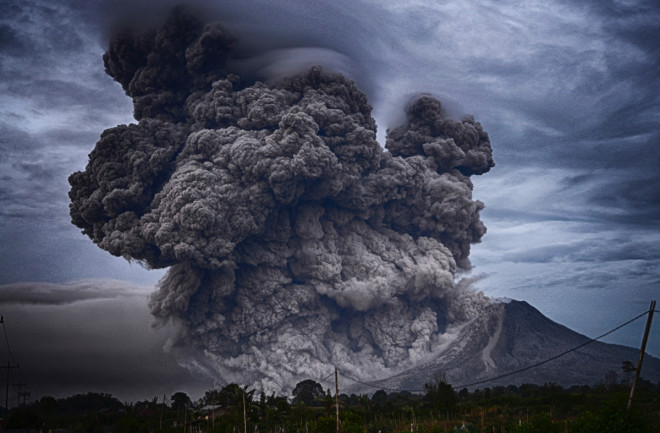 Mount Sinabung, Indonesia. (Credit: Yosh Ginsu/Unsplash) Ancient Egypt was the most powerful civilization in the world for a time. The monuments built by laborers to honor pharaohs stand to this day, testament to the vast resources at their command. But the architectural excess hid a crippling weakness. Egypt sits in the middle of a vast desert. To support a population that numbered in the millions, large-scale agriculture was vital, and for that you need water, and therefore, the Nile. The river was so important to the Egyptians that they still celebrate a two-week long festival during the yearly floods. It was thought to be fed by the tears of Isis. Even small fluctuations in flood levels could bring famine or catastrophe.

Ancient Egyptian society saw its fair share of uprisings, revolts and conquests, but a new paper hints that a surprising force may have been meddling in the affairs of the time. The nefarious agent? Volcanoes, say researchers from Yale University in a new paper in Nature Communications. Large eruptions can cause small but critical changes in rainfall around the headwaters of the Nile, something they found lined up with periods of revolt and instability in ancient Egypt. The researchers relied on a combination of ancient records and modern techniques to divine the weather thousands of years ago. Papyrus scrolls from the Ptolemaic era around 300 BC provided insights into periods of social unrest and drought, and they combined those with an analyses of ice cores taken from Greenland and Antarctica. The plumes of sulfur that volcanic eruptions spew into the air leave a distinct trace in the ice, forming a record of when major volcanic eruptions occurred.

A Nilometer in Cairo. (Credit: Baldiri/Wikimedia Commons) The sulfur also serves to cool the planet by reflecting sunlight, and this likely starved the Nile of rainwater during the monsoon season by shifting weather patterns, leading to parched fields come summer. Readings from Nilometers, ancient observatories on the Nile that tracked yearly water levels, confirmed reduced flooding during these times, depriving the Egyptians of their main food source. The Egyptians relied on an elaborate system of dams and canals to inundate their fields, bringing in silt to serve as fertilizer and water to keep crops alive. If the waters failed to crest high enough, the fields remained dry and food production dwindled.

This translated to real consequences. By tracking records of priestly decrees, revolts and land sales during these times, the researchers found a marked increase during years when the floods failed to deliver. A famous military campaign cut short line dup with unrest at home, as did a 20 year long uprising during the Ptolemaic era. This means famine and bloodshed, and the death and destruction they bring. Eruptions may have even played a role in the fall of the Ptolemaic dynasty in 30 BC, they say, when a Roman invasion swept through the country. Saying that volcanoes toppled the Egyptians is obviously untrue — we can blame Gaius Octavius for that. The vagaries of the climate can have very real effects on people's lives however, especially when those people are part of a populous nation perched near the only fresh water source for hundreds of miles around. An ill-timed eruption could conceivably tip the scales. The lesson remains meaningful today. Some 70 percent of the world's population today depends in some way on monsoons. Shifting the pattern of rainfall that people have spent tens or hundreds of years living with and adapting to can cause real harm, whether you're in Bangladesh or Houston. It needn't be a massive eruption, either. Climate change is altering weather conditions all across the globe at a rate much quicker than many can adapt to. When we assess how a changing planet could affect us, let's take a lesson from the Egyptians.