Volcanologists have never understood why some volcanoes produce mysterious, regular tremblers — until now. 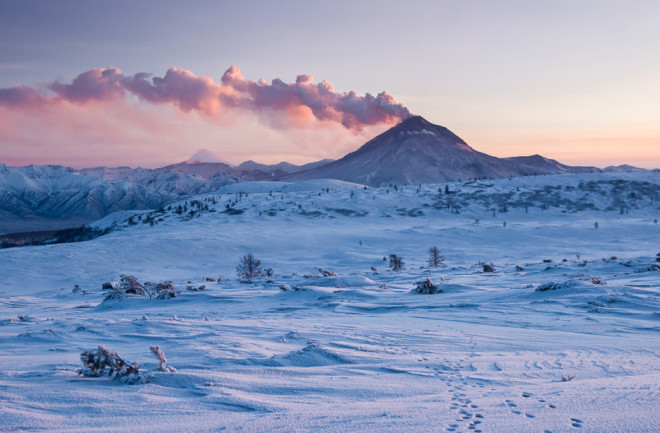 In 2011, the Kizimen volcano in the Kamchatka peninsula of the Russian Far East began to erupt in an unusual way. After almost a century lying dormant, the ground began to shake with a series of earthquakes that formed a powerful, regular drumbeat.

Drumbeat earthquakes are rare although geologists have occasionally recorded them. However, this one was strange because the beat was steady for days but over time changed to a lower frequency with a more powerful “beat”.

That’s a puzzle. Volcanologists have various theories to explain how volcanoes cause earthquakes but these do not account for the drumbeat effect at Kizimen.

Now Parovik Roman at the Vitus Bering Kamchatka State University in Russia and a couple of colleagues have developed a model that explains this strange behavior and how different beats can emerge from the same volcano.

Volcanologists have long known that the movement of magma and high pressure gases through fissures forces the ground apart with explosive force. This process creates the quakes that volcanoes are known for. However, it does not explain the drumbeat effect.

So Roman and colleagues turned to a basic idea in earthquake science – the stick-slip model, which explains how most conventional earthquakes occur. The model consists of a block sitting on a surface being pulled with a gradually increasing force. At first, friction prevents the block from moving but when the force overcomes friction, the block suddenly slips. This is equivalent to the sudden movement of the earth in an earthquake.

Roman and colleagues says something similar can happen inside volcanoes as magma forces its way to the surface. In this case, the head of the flow can solidify so that the pressure builds until it gives way, allowing the liquid magma to burst through. This sudden shift creates an earthquake.

The process leads to a drumbeat effect when the solidification followed by bursting repeats regularly. At the Kizimen volcano in 2011, this was happening every 14 seconds in March but by October the frequency had slowed considerably to once every few minutes.

What causes the frequency to change? Roman and colleagues says that the viscosity of magma can change over time. And when the flow becomes thicker and stronger, the rate at which it solidifies changes too.

The researchers created a mathematical model that accounts for all these details and then compared it to the earthquake data generated by the volcano throughout 2011.

It turns out that the rate of solidification, or freezing, is a particularly important factor in the period of the drumbeats. “The freezing coefficient of the block had the greatest influence on the oscillations,” says Roman and colleagues. Magma that freezes more readily creates a more effective block requiring more force to overcome. This slows down the frequency of the drumbeat but makes it more powerful, just as observed at Kizimen.

That’s an interesting result that gives greater insight into the behavior of certain volcanoes and the strange drumbeat earthquakes they produce.

It also suggests a new way to analyze volcanoes by studying the frequency of the earthquakes they produce and how this is changing. This new way to peer inside volcanoes could help understand how conditions are changing within.

That could be useful — volcanologists need all the help they can get to study their charges Ref: Mathematical Model of the Stick-Slip Effect for Describing the "Drumbeat" Seismic Regime During the Eruption of the Kizimen Volcano in Kamchatka : arxiv.org/abs/2107.00827