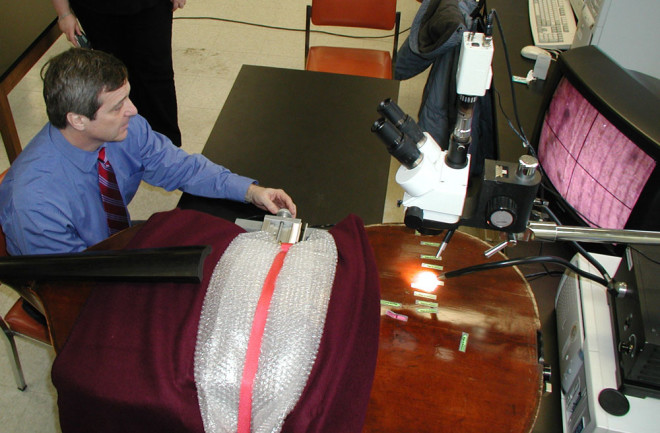 Dendrochronologist Henri Grissino-Mayer and colleagues study the tree rings in the Karr-Koussevitzky double bass. Their analysis ultimately determined that the instrument was built much later than previously thought. (Credit: Henri Grissino-Mayer) Modern science is full of surprising analytical techniques that can be used in a wide variety of remarkable circumstances. My favorite technique is dendrochronology—the study of “tree time.” By assigning calendar-year dates to growth rings in trees, scientists can garner information relevant to an astonishing range of disciplines, including archaeology, climatology, the study of fire history, and many others. Believe it or not, tree ring analysis has even been used to date wooden musical instruments like violins and cellos, and in at least one case, a double bass. The double bass is a member of the viol family and looks like a large cello, but it can produce sounds a full octave lower than a cello. Because of its size it is harder to play than its stringed-instrument cousins, so it is less commonly seen in orchestras and other musical ensembles. That is why it’s not as well-known to the general public. Just over a decade ago, dendrochronologists analyzed tree rings in the wood from which the world-famous Karr-Koussevitzky double bass was made. Their work forced a radical reinterpretation of the instrument’s history.

Serge Koussevitzky, one of the most renowned double bass players of all time, died in 1951, but his instrument was given to double bassist Gary Karr in 1962. After that it became known as the Karr-Koussevitzky double bass. (Credit: Wikimedia Commons)

In 1962, Russian-born philanthropist Olga Koussevitzky attended a performance of the New York Philharmonic in which Gary Karr, a promising young double bassist, offered his New York debut recital. Koussevitzky’s late husband, who died more than 10 years earlier, was Serge Koussevitzky (1874–1951), conductor of the Boston Symphony Orchestra from 1924 to 1949 and arguably the most famous double bass player of all time.

Ms. Koussevitzky claimed that during Karr’s performance she saw her husband’s ghost embrace the young man on stage. She was so moved by the experience that she decided to give her husband’s prized double bass to Karr, thus leading to the Karr-Koussevitzky name for the instrument. Upon his retirement in 2004, Karr donated the double bass to the International Society of Bassists, and four dealers, appraisers, and experts

jumped into action to professionally evaluate the instrument for the first time. After analyzing stylistic and technological attributes, they suggested that the double bass dated to about 1800 and was probably from France. It was at this point that the tree ring experts got involved. Dendrochronologists Henri Grissino-Mayer and Georgina DeWeese, along with luthier Dustin Williams, conducted the analysis

. They carefully secured the double bass to a movable platform so that they could safely measure the tree rings visible in the spruce wood used to make the instrument. Given its size—more than a meter long and 33 to 63 centimeters wide—this was not an easy task! They measured a total of 317 growth rings in two long, overlapping sequences in two of the many pieces of wood that make up the instrument. They then mathematically compared the measured ring-width data to known tree ring reference chronologies from across west-central Europe. Grissino-Mayer and colleagues determined conclusively that the last growth ring present on the double bass grew in 1761. Based on their understanding of how spruce trees grow, and an estimate of the number of rings missing from the end of the sequence, they calculated that the tree from which the instrument’s wood was taken had been cut down between 1775 and 1790. Statistically, the ring-width pattern from the double bass is most similar to growth patterns in trees growing in the eastern Alps. The pattern’s strongest relationship is with tree ring chronologies developed near Obergergl in western Austria, just north of the Italian border, followed by Simmental in northern Austria and Berchtesgaden in extreme southeastern Germany. Finally, Williams’ stylistic and technological analysis of the instrument—and the fact that it was downsized at one point in its history—led him to conclude that it was made by French luthiers, using wood imported from Austria. Prior to the tree ring analysis, unconfirmed and unwritten histories of the double bass held that the world-famous Amati brothers made it in Cremona, Italy, in 1611. Antonio and Girolamo Amati were the most renowned instrument makers of their day, and they remain famous for the quality of their workmanship and the prestige associated with their pedigree. (Girolamo’s son Nicolò went on to train Antonio Stradivari, who created the famous Stradivarius violins.) It is therefore not surprising that previous owners of the Karr-Koussevitzky double bass would want to have the Amati brothers’ name associated with the instrument, for its appraised value would skyrocket. Dendrochronology demonstrates conclusively that the Amati brothers cannot possibly have crafted the instrument in 1611. Indeed, the best we can say is that some unknown luthier made it at least 165 years later. Circumstantial evidence supports this conclusion as well: If the Amati brothers made the instrument, it would be the only known double bass in their oeuvre, which otherwise includes 77 violins, 27 violas, and 12 cellos.

Museum curators, appraisers, and private collectors spend a lot of time and money conducting provenance research in an effort to generate life histories and chronologies for specific objects under their care. They do so for good reason: Reliable provenance can demonstrate authenticity and legality, and can affect the monetary value of rare objects.

When the tree ring analysis forced a revision to the Karr-Koussevitzky double bass’ history, it was likely disappointing to all parties concerned. The revised history doesn’t affect the quality of the instrument or the sound it produces, but it certainly impugns the prestige associated with the object. In the big picture, though, more was gained than lost. Science is about finding the truth, and truth is more important than money and prestige put together.