How to Slim Down, Manage Your Man, and Stay Tight with Your Girlfriends!

Who ever said science wasn't for us ladies? This week's research is full of tips on looking good, eating right, and taking care of your man! Plus: Don't miss a shocking true story about a girls' get-together turned deadly.

You try to eat right. But sometimes that low-sodium poached chicken breast on lettuce doesn't thrill your taste buds. What if merely looking at pictures of steak, pizza or pastries made your healthy meal taste heartier? New research from Switzerland says that just might work. 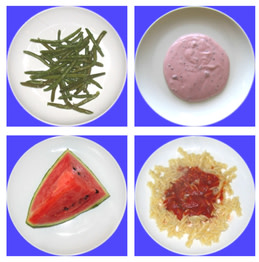 A group of Swiss scientists studied 14 healthy adults. The subjects held an electrode on their tongues while researchers flashed pictures of foods in front of them. The electrode gave off little buzzes of "electric taste," triggering subjects' taste buds with a neutral, slightly metallic taste.

People experienced a more pleasant flavor in their mouths when the electric taste was paired with a high-calorie food picture than a low-calorie one. The scientists say these images of forbidden foods light up the parts of our brains that go "Mmm!"

Could you try this trick in your own home? The researchers didn't study what happened when people ate actual food while looking at pictures. But if your gluten-free, high-fiber bread is blander than a piece of metal, staring at a picture of chocolate cake might make it seem tastier.

FITNESSThis surprising workout trick will have you handing back unwanted pounds!

If you're overweight, you might find exercise frustrating. Just a few minutes of exertion can leave you feeling overheated and sweaty. But research presented at an American Heart Association meeting may provide a solution to your problem: colder hands.

Researchers at Stanford University conducted a small study on obese women between the ages of 30 and 45. All the women participated in a 12-week exercise program that included push-ups, lunges, and using a treadmill. Half the women held their hands in cylinders of cold water while they were on the treadmill, while the other half kept their hands in body-temperature water.

Because the women who exercised with their hands in cold water stayed cool, they were less likely to get frustrated and drop out of the exercise program. (They even stuck it out through those dreaded push-ups!) These women lost more weight and got in better shape than the other group of women.

You probably don't have one of these cold-water exercise devices in your local gym. But you can still apply the findings to your own exercise routine. In the summer, why not freeze water bottles and hold them in your hands while you work out? And in colder months, get outside and ditch those gloves! After all, everyone can agree that a beach-ready body is worth a little numbness in the extremities.

Attaman studied the swimmers of 99 men who came to a fertility clinic. She also gathered data about the men's diets and divided them into three groups based on their fat intake. The men in the highest fat-consuming group had sperm counts 43 percent lower than men who consumed the least fat. That's news that will chill some men's hearts colder than a Shamrock Shake.

But it's not all bad news for fats. While saturated fats were tied to low sperm counts, healthy fats called omega-3's seem to be good for sperm. Men who were in the highest third for consumption of this kind of fat had healthier, better-formed swimmers. So next time you cook your burger king a thoughtful dinner, think of his own little sesame seeds and try salmon instead of steak.

Bertha,* a Japanese honeybee, was hard at work in her hive one day when she became aware of an intruder. A giant hornet, Vespa mandarinia japonica, was inside the entrance of the hive. Suddenly Bertha found herself swept up in a buzzing mass of bodies.

"I'd heard rumors about the hot defensive bee ball before," Bertha says, "but I'd never been a part of one myself." The sister honeybees clumped together in a tight swarm around the massive body of the hornet. (They don't call them giants for nothing. Check out some mug shots of these unpopular predators here.)

Vibrating their muscles to generate heat, the bees cranked the temperature in the swarm up to 46 degrees Celsius, or 115 degrees Fahrenheit. That's even hotter than your Bikram class! It was uncomfortable for Bertha--but for the hornet, it was worse.

Within an hour, the hornet was dead. The bees dispersed. And that's when they found themselves, instead of at the hive's entrance, inside a glass beaker. The attack had all been a ruse perpetrated by scientists. The hornet hadn't even been coming after the bees in earnest; researchers had shoved it inside the hive on a wire.

"I felt sort of used," Bertha says. "I was just swept up in the moment, and now I know I was manipulated into joining the bee ball. But at least it was for science." (Bertha was luckier than some of her sisters, who were forced to donate their heads to science as well.)

The researchers wanted to find out what genes were activated in bees' brains while they formed the hot defensive bee ball. They found one gene of note. But the same gene was active when bees were heated up outside of the bee ball. So it seems to be a response to the furnace-like environment the bees create, not a cause of the mysterious ball-forming impulse.

To find out what drives bees to form hot, deadly mobs in the first place, scientists--and Bertha--will have to wait.

*Some names have been changed.