How to Read An Ancient Scroll Without Ever Unwrapping It 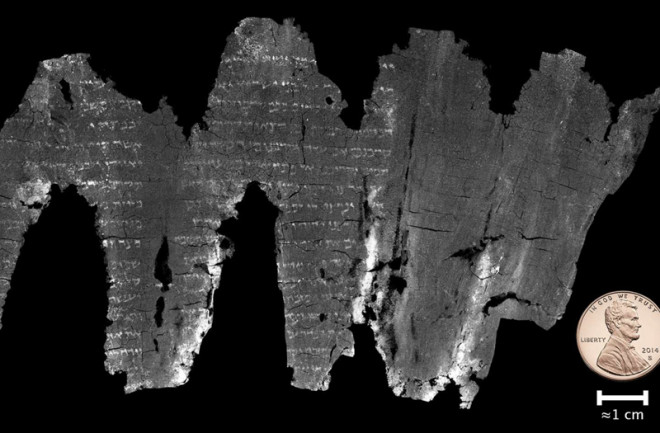 A new image processing technique has peered into an ancient parchment scroll from Israel, allowing researchers to virtually unwrap the brittle parchment and read the text contained inside for the first time.

The En-Gedi scroll was discovered in Israel 1970, but had been so badly charred that even touching it risked disintegration. It had been stored for 45 years, with no hope of gleaning its secrets until now. In collaboration with the Israel Antiquities Authority, researchers from the University of Kentucky used a form of X-ray analysis called microcomputed tomography (micro-CT) to peel back each delicate layer of the scroll and digitally render a flat, readable version of the artifact.

Slow, But Worth It

Their process was painstaking, and involved several discrete steps. To fully read the scroll, the researchers had to separate each tightly wound layer from the whole, a process made even more difficult by the fact that the layers are twisted and compressed.

Their first step was to overlay a mesh of tiny triangles onto the 3-D structure of the scroll to separate out the individual layers. The next challenge was to pick out the letters inscribed on the parchment. They accomplished this by mapping out the different densities of various elements within the scroll — the ink used contained metal, and was thus denser, causing it to stand out against the parchment. They then flattened the scroll into a continuous sheet by essentially algorithmically reversing the process of rolling it up. Finally, they had to merge the hundreds of individual snapshots of the parchment into a cohesive whole, a process that at times involved the researchers assembling the images by hand.

They were left with a single page containing two columns of legible Hebrew writing. The text contained within appears to be a copy of the biblical book of Leviticus, making it one of the oldest copies of a Pentateuchal book ever discovered. The En-Gedi scroll has been dated to either the fourth century AD or the second century, depending on the method used. Only the Dead Sea Scrolls, discovered in roughly the same area and from around the same time period, are older.

"Damage and decay is the natural order of things," says Brent Seales, speaking during a press conference. The University of Kentucky researcher led the effort to scan the scroll. "But you can see that sometimes you can absolutely pull a text back from the brink of loss."

The scroll had actually been scanned before by the same team, but those efforts yielded only the first few lines of the text. This time, the researchers were able to recover nearly all of the ancient writing, with the exception of a few areas where the parchment had burned away completely. They published their work Wednesday in Science Advances.

The technique used to read the En-Gedi scroll bears some similarities to other attempts to read damaged objects from the inside out. Earlier this year, researchers from France using a synchrotron were able to look inside a badly burned scroll recovered from Herculaneum, buried after the eruption of Mount Vesuvius. They used a different X-ray technique, and relied on the fact that the metallic ink inside fluoresced under the radiation, allowing them to make out individual letters. That team was unable to fully reconstruct the writing inside, however.

"The En-Gedi Scroll is proof positive that we can potentially recover the whole text from damage material, not just a few letters or a speculative word," says Seales.

Being able to read the text in its entirety is important for Biblical scholars who are attempting to piece together the history of humanity's most famous book. Today, the Hebrew Bible, and the Christian Old Testament, are based on the Masoretic text, a manuscript dating to Medieval times. Of course, that book is based on older texts, but many have been lost, or are incomplete. New texts provide researchers a chance to observe the evolution of biblical manuscripts and compare and contrast various versions with one another.

The researchers say that the book of Leviticus contained within the En-Gedi scroll appears to correlate perfectly with the account given by the Masoretic text, although the two are separated by hundreds of years. This is of great interest to Biblical scholars, as it pushes back the date of their seminal text and shows that the version of the Hebrew bible in use today had been standardized by at least the fourth century.

This may be only the first scroll to be analyzed with the technique developed by Seales and his team. The En-Gedi scroll was previously just a curiosity, rendered of little use by its severely damaged condition. With advanced analytic techniques, the researchers were able to breathe new life into an important archaeological artifact. There are undoubtedly more texts like the En-Gedi scroll languishing in museums and collections around the world, just waiting to be opened anew.