How to Preserve a Dinosaur 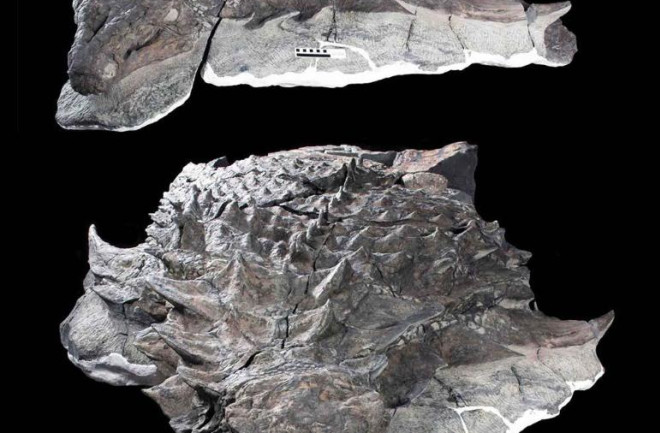 Extremely rare among armored dinosaur fossils, the remains of Borealopelta markmitchelli were preserved with many of its spikes and bony plates in place. (Credit: Royal Tyrrell Museum of Palaeontology, Drumheller, Canada)

Royal Tyrrell Museum technician Mark Mitchell estimates he spent 7,000 hours chipping away at rock to uncover this 112 million-year-old dinosaur fossil, put on display at the Alberta museum in May. Described formally in August in Current Biology, the animal’s name, Borealopelta markmitchelli, is a nod to Mitchell’s dedication.

The plant-eating, tanklike nodosaur is unusually well preserved, including its hefty body armor, large shoulder spikes and even pieces of soft tissue. Only the animal’s front half was found; its partly exposed innards include the fossilized remnants of a last leafy meal. Don Henderson, the Royal Tyrrell’s curator of dinosaurs, believes that soon after death, the nodosaur’s bloated carcass floated down a river out to the ancient Albertan sea where “eventually the body went pop, and he sank like a stone.” Sediment must have then rapidly buried the body, preserving it with lifelike detail.