How to make meerkats even more sociable 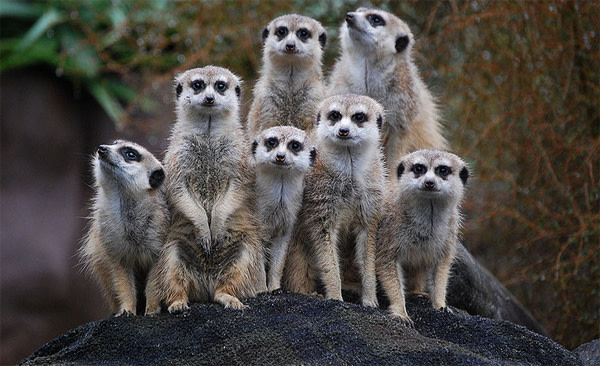 Meerkats already look like a textbook case of a cooperative social animal. They live in groups of up to 50 individuals. All of them help to dig and guard the community’s burrows. They babysit, feed and teach the colony’s pups, regardless of whose offspring they are. The society already seems like the model of altruism, but there is a way of making meerkats even more cooperative – injecting them with a hormone called oxytocin. Oxytocin is found in all mammals and affects a wide variety of emotions and social behaviours. In humans, it has been linked to trust, social interactions, generosity, orgasm, the bond between parent and child, and more. A simple sniff of oxytocin could help to inspire trust in others or even improve the social skills of autistic people. Joah Madden and Tim Clutton-Brock from the University of Cambridge wanted to see what effect it would have on meerkats. They worked with 36 wild meerkats from four different groups, all living in South Africa’s Kuruman River Reserve. The animals were accustomed enough to humans that the duo could capture individuals and inject them with either oxytocin or a saline placebo. By following them around afterward, Madden and Clutton-Brock could compare the meerkats to see how they behaved. Simples. Critically, the experiment was a “double-blind test”. At the time, the person doing the injecting didn’t know which meerkat was being shot up with which substance, and nor did the person who observed them afterwards. They only revealed these details after the experiment was over. This reduces the odds that the scientists would misread the animals’ behaviour by (deliberately or unconsciously) looking out for specific signs. Each meerkat was paired with an individual from the same litter, and only one of each pair was injected with oxytocin. After several days, long enough for the hormone’s effects to wear off, the injections were swapped. In this way, every meerkat acted as a control for its partner, but also for itself. Madden and Clutton-Brock could compare any individual’s behaviour with that of its buddy, but also with its own behaviour at a different point in the study. Across the board, oxytocin boosted the social side of the meerkats’ behaviour. After an injection, individuals spent more time on guard duty and on digging burrows. They were less aggressive towards their fellows. They spent more time with the pups (but not other adults) and they gave the pups a larger share of their food. All of these efforts came at a personal cost: the oxytocin-loaded meerkats spent less time actually foraging for themselves, and they ended up eating less food. The wide-ranging effect of oxytocin suggests that the full suite of social behaviours in meerkats comes as a package. The animals have a sort of “cooperation syndrome”, consisting of lots of different signs (babysitting, digging, and so on) that go paw-in-paw with one another. A single hormone can influence all of them at the same time. Madden and Clutton-Brock think that this could help to explain why meerkats perform acts that are both obviously beneficial to them alongside others that are less so. For example, devoting time to digging or acting as a sentry is good for the group but it also directly benefits the individual, who gets a larger home and reassurance against danger. But feeding or raising the pups of other meerkats is only indirectly beneficial (because they might share some of your genes) and directly costly (because you can’t spend that time on feeding yourself). If all of these actions are governed by the same hormonal engine, it could be very difficult to uncouple the more beneficial ones from their more costly partners. Reference: Proc Roy Soc B http://dx.doi.org/10.1098/rspb.2010.1675Photo by Ashleigh Thompson More on oxytocin: