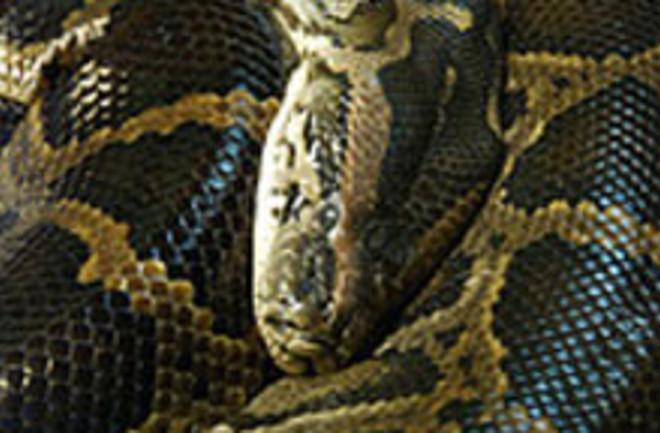 The burgeoning 150,000-snake python population in Florida's Everglades National Park threatens crops, livestock, and native animals. And, as the July 1 story of the toddler killed by a pet python demonstrates, the snakes can also threaten human lives. The snake overpopulation began when python owners discarded their unwanted pets in the wild; now, lawmakers are pushing for legislation to combat this invasive species. Not surprisingly, there is disagreement over the best way to do it. Florida Senator Bill Nelson, who filed a bill in February to ban the importation of Burmese pythons, told a Senate panel on Wednesday that the snakes are slithering their way into a wider geographical area.

Then he explained in graphic detail how a pet python... strangled a toddler in her crib last week in a town northwest of Orlando. ''It's just a matter of time before one of these snakes gets to a visitor in the Florida Everglades,'' Nelson said [Miami Herald].

Nelson said he's been pestering the U.S. Fish and Wildlife Service for three years to halt the growth of the snake population, but the agency has not yet taken action. In addition, an environmental scientist at the panel emphasized the need to majorly restructure the policies that regulate and control import of exotic species like the python. The legislation Nelson proposed would classify pythons as injurious animals, making it illegal to bring the snakes over state lines and, he hopes, preventing people from keeping pythons as pets. Not surprisingly, exotic pet sellers stand opposed to Nelson’s plan, saying it will kill the exotic pet industry. It’s a powerful lobby: An estimated 100 million Americans own some kind of exotic pet, and critics worry a ban would drive more of the trade underground

[Christian Science Monitor]. Legislation implemented last year made it more expensive, but not illegal, to own the snakes, due to mandatory $100 yearly permits and tracking chips that are required on pythons wider than two inches.

Others propose putting a bounty on the snakes and letting hunters fire away. That would require lifting the ban on hunting in the Everglades, but it's a measure the U.S. Park Service is considering, given the gravity of the situation.

At the Senate hearing on July 8, Nelson laid the skin of a 16-ft. Burmese python across the witness table and urged colleagues to "address this ecological crisis." But even if the Senate doesn't pass Nelson's measure, last week's tragedy at least ensures that more Floridians will take the python threat seriously [Time].