How to Build an Ant Bridge: Start Small 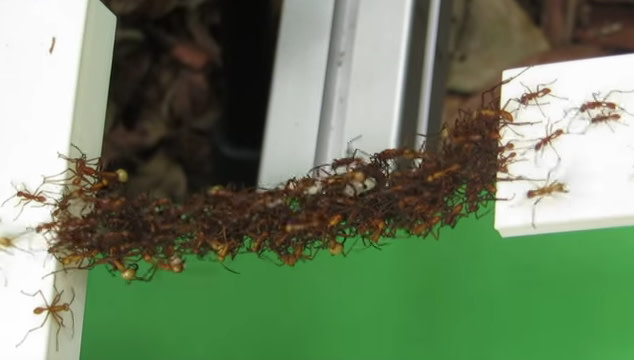 You know when you're out walking with a big horde of your friends and you come to a chasm you can't step across, so a bunch of you clasp each other's limbs and make yourselves into a bridge for the rest to walk on? ...No? Eciton army ants do this. And they're not the only ants that build incredible structures out of their strong, near-weightless bodies. Weaver ants make chains between leaves by holding onto each other's waists. Fire ants cling together to form rafts and survive flooding. Ants build these structures democratically, without any leaders. (Or language, or tools.) To learn more about how they do it, scientists went into the forests of Panama. https://www.youtube.com/watch?v=zMs-WXWV4gA Led by Chris Reid of the New Jersey Institute of Technology and Matthew Lutz of Princeton University, researchers designed an apparatus to test ants' bridge-making skills. Eciton hamatum army ants need to build bridges because they're constantly on the move. They swarm an area of the forest, devour any bugs they find there, and then move on. When they come to a gap in the leaves covering the forest floor, they bridge it to keep the troops moving quickly. Bridges can be just a few ants, or hundreds of them. The researchers built a device like a miniature, raised roadway with a sharp kink in it. Then they found an army ant trail and put their device right in the middle. They used leaves and sticks that were already covered with the ants' pheromones to guide the insects onto their device. If ants walked all the way along this artificial road, they would have to make a wide detour from their original path. But if they built a bridge across the angle, they could continue marching in more of a straight line. A hinge let the scientists widen or narrow the angle the ants would have to navigate. https://www.youtube.com/watch?v=5WzaVaTkTAM The army ants successfully shortened their detour by building bridges across the gap. But they didn't start at the widest part. Instead, they built their bridge at the skinny end of the angle, where it took only a few ant bodies. Then they gradually scooted the bridge toward the wider end, adding ants as they went. Although the ants bridged the gap handily, they didn't manage to stretch across the very widest part. Reid and Lutz think this is because of tradeoffs that come with building a footbridge made of soldiers. The more ants are part of a bridge, the fewer are left to carry stuff across it, for example. And the ants maintained a steady ratio of length to width in their bridges, so as bridges got longer, they also needed to get wider. Once all the troops are across, an ant bridge breaks apart and marches away too. Being part of a living bridge is, presumably, a thankless job for the army ants. But it won't be long before they get to walk on someone else's back. Image and videos: Courtesy of Matthew Lutz, Princeton University, and Chris Reid, University of Sydney.