How To Be A Snake [Life in Motion] 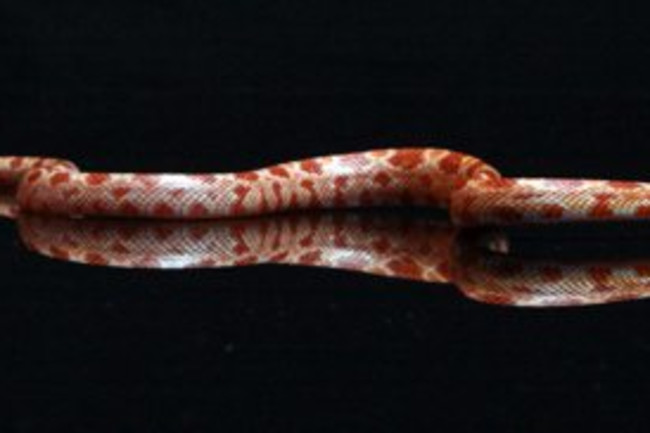 If you stroke a snake, its skin feels slick and slippery (ed: or smooth, at any rate). Yet according to a new study by scientists at New York University and Georgia Tech, snakes actually depend on friction to move. Snakes crawl by contracting the muscles that run along their body and pushing against the ground. Recently David Hu and his colleagues took a close look at that snake-surface interface. They anesthetized snakes and lay them on a board. By tipping one end of the board, they could see how well a snake’s body could hold onto the surface thanks to friction alone, without any extra forces generated by the snake’s muscles. Hu and his colleagues discovered that snake scales can actually create a lot of friction by catching on tiny bumps on the surface they’re lying on. (They only feel smooth if you stroke them tailward.) The scientists found that the scales can generate twice as much friction if a snake is sliding forwards than if it is sliding sideways.

To see if they were right, the researchers built a mathematical model of a snake on the basis of their observations. They then changed some of the variables, such as the smoothness of the surface on which their mathematical snake crawled to predict how a real snake would perform. Here, for example, is what happens when a milk snake tries to slither across a smooth plastic surface. Without any bumps on which it can catch its scales, it crawls in place.

Hu and his colleagues then let their snakes crawl on a rough surface, but first put them in a cloth sleeve.The snakes could push against the surface, but because they couldn't lock their scales onto it, they again slithered in place. The model Hu and his colleagues created slithered a lot like real snakes do, as shown in this simulation (the red dot shows the center of mass). 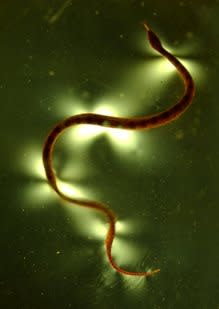 But the scientists recognized how they could make the model match reality even more closely. In their original model, the snake lay completely flat against the ground. That's not how snakes actually slither. They only make contact with the ground at a few spots along the length of their bodies. This picture shows a snake crawling across a plate of gelatin. The photo is lit by polarized light, which creates bright reflections where it hits places where the snake is pushing against the gelatin. Rather than creating a long, snake-shaped stretch of light, the snake creates just a few patches where it is pushing against the plate. The researchers decided to see what happened if they let the snakes in their model lift up their bodies the way real snakes do. Hu and his colleagues found that their snakes slithered 35% faster and boosted their efficiency by 50%. In this movie, the body is colored red whe the snake has lifted its body, and blue where it is concentrating its weight on the ground. The model works better because the snakes can press their weight only on the spots where the force of friction is highest in the backwards direction. By continually redistributing their weight, the snakes can slither as quickly and efficiently as possible. A snake may look a little silly trying to crawl while wearing a sleeve. But such humiliations can help us appreciate just how graceful snakes really are. Reference: David L. Hu et al, "The mechanics of slithering motion." PNAS. http://www.pnas.org/cgi/doi/10.1073/pnas.0812533106