The turtle's shell provides it with a formidable defence and one that is unique in the animal world. No other animal has a structure quite like it, and the bizarre nature of the turtle's anatomy also applies to the skeleton and muscles lying inside its bony armour.

The shell itself is made from broadened and flattened ribs, fused to parts of the turtle's backbone (so that unlike in cartoons, you couldn't pull a turtle out of its shell). The shoulder blades sit underneath this bony case, effectively lying within the turtle's ribcage. In all other back-boned animals, whose shoulder blades sit outside their ribs (think of your own back for a start). The turtle's torso muscles are even more bizarrely arranged. 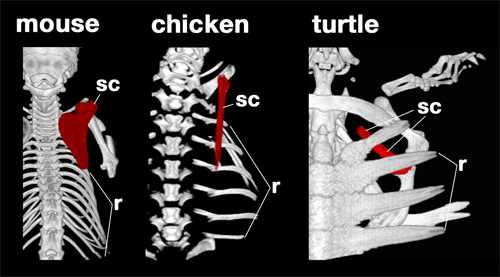 This body plan - and particularly the odd location of the shoulder blades - is so radically different to that of all other back-boned animals that biologists have struggled to explain how it could have arisen gradually from the standard model, or what the intermediate ancestors might have looked like. Enter Hiroshi Nagashima from the RIKEN Center; he has found some answers by studying how the embryos of the Chinese soft-shelled turtle (Pelodiscus sinensis) shift from the standard body plan of other vertebrates to the bizarre configuration of adult turtles.

By comparing the embryos to those of mice and chickens, Nagashima showed that all three species start off with a shared pattern that their last common ancestor probably shared. It is only later that the turtle does something different, starting of a sequence of muscular origami that distorts its body design into the adult version. 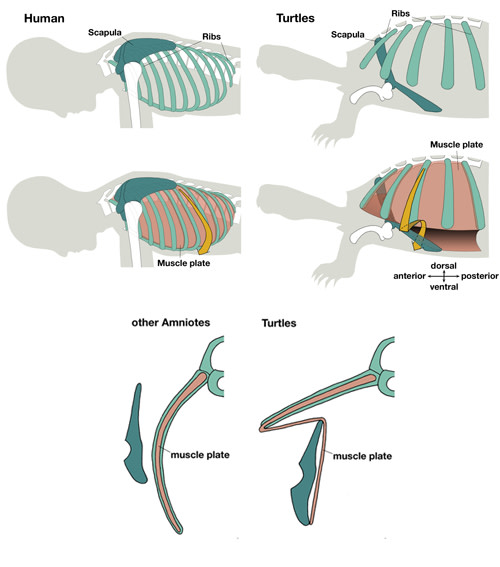 Initially, the embryos of all three species have shoulder blades that sit outside the ribs. In the mouse and chicken, the blade starts to grow backwards, extending down the trunk across the developing ribs. The ribs themselves have extended down the embryos' flanks and are surrounded by a layer of muscle called the muscle plate (or myotome). These elements - the ribs, the shoulder blade and the muscle plate - stay in much the same formation as the animals grow into adults.

In the turtle, early embryos share the basic plan as those of mice and chickens, but there are subtle differences. The shoulder blade is positioned further forward and the ribs themselves are much shorter, never reaching down into the embryo's flanks. As it grows, things change dramatically.

The muscle plate in the lower half of the turtle's body folds inwards along a line that runs down the turtle's body. This line will eventually form the edge of the shell and it's called the carapacial ridge. Meanwhile, the second pair of ribs (r2 in the image below) grows outwards and swing forwards over the shoulder blade (sc in the image below). A similar thing happens over the animal's hips. These two crucial events - the folding of the muscle plate and the growth of the second ribs - bring the shoulder blade within the confines of the ribcage. Both steps are possible because the turtle's ribs stop growing early on in its development and no one yet know why this happens.

The muscle that connects the shoulder blade to the second pair of ribs - the serratus anterior - becomes twisted in the process but keeps its ancestral attachment to both bones (see above). Other muscles, particularly those that power the limbs, form very different connections.

In mice and chicken, the large latissimus dorsi muscle (which connects the top of the forearm to the back) initially grows out from the embryo's limb bud, attaches to its trunk, and starts expanding backwards to cover the back. In the turtle embryo, the growing muscle attaches to the front part of the developing shell, near the neck. Likewise, the pectoral or chest muscles of chickens and mice grow from the limbs into the sternum, but those of turtles connect to the plastron - the bottom half of the shell. These new connections account for the bizarre differences between the musculature of adult turtles and other vertebrates.

Nagashima also suggests that his findings secure the place of a recently discovered fossil turtle - Odontochelys - as an intermediate form between shell-less turtles and modern versions. Odontochelys was a turtle in a half-shell, whose armour had a lower half (a plastron) but not a top one (a carapace). Its discoverers suggested that it was a sign that turtles evolved via a half-shelled form, but other scientists claimed that it could equally be a descendant of fully-shelled turtles that had itself lost half its shell.

Odontochelys also had short ribs on its back that seem to have stopped growing early. Its second set of ribs, however, never grew to cover its shoulder blade, which still sat in front of the entire rib cage. That matches the body plan of modern turtle embryos in the early stages of development, which supports the idea that this extinct turtle represented an ancestral pattern.

The short ribs of Odontochelys suggests that like modern turtles, it had a carapacial ridge and was on the way to completing the top half of its armour. Nagashima suggests that the ridge only extended down its flanks but didn't meet at the front and back (note the dotted red line in the image below). It may have been this simple step that provided the impetus for the movement of the second pair of ribs to cover the shoulder blade, the evolution of the carapace, and the completion of the turtle's armour. 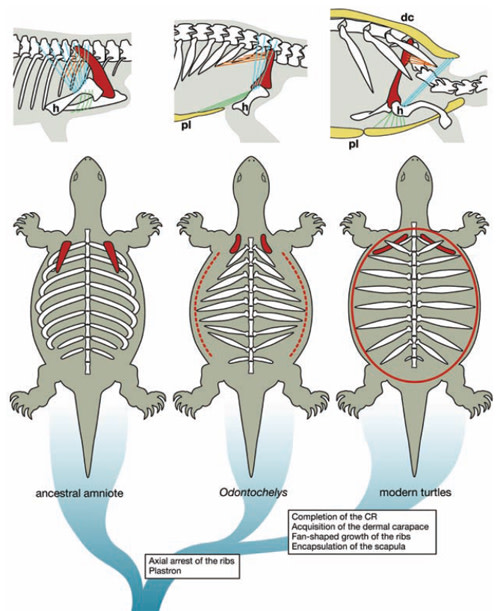 More on turtles:Heroes in a half-shell show how turtles evolved