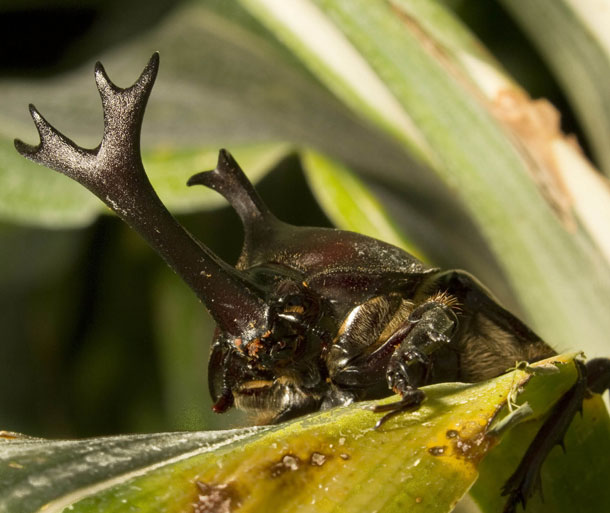 The male Japanese rhino beetle wields a huge forked horn on his head. It looks like a jousting weapon, and the male uses it to pry and flip other males off a branch. But it’s also a billboard, a prominent and completely honest advertisement for the male’s quality. The horns are extremely variable. Small males have pathetic nubbins on their heads, while big ones have unfeasibly large prongs that can grow to two-thirds of their body length. Doug Emlen from the University of Montana has found that the growth of the horns is intimately tied into molecules that reflect how well-nourished the beetles are. Not only that, but the horn is more sensitive to these molecules than any other body part. Well-fed beetles may have larger wings and bodies than poorly-fed ones, but they have muchlarger horns. This ornament can’t be faked. It is impossible for a weak beetle to feign rude health by growing a larger horn, so females can rely on the size of the horns to judge a potential partner’s health. And with a body part that conspicuous, they don’t have to look very hard. [embed width="610"]http://youtu.be/_VBz0FaXN1c[/embed] The growth of the horns depends on insulin and related molecules called insulin-like growth factors (IGFs). Most people know insulin as the substance that some diabetics have to take, but it and the IGFs are also major players in animal development. Their levels change depending on nutrition, stress and infections, and they control how fast different tissues can grow. They fine-tune the size of an animals’ body so that it’s appropriately sized for the environmental challenges it will face. If there’s plenty of food around, a bigger body will do well, and insulin and IGFs ensure that one is produced. If every body part was equally responsive to insulin and IGFs, then every bit of an animal would grow at the same size. A big individual would just be a scaled-up version of a small one. But this doesn’t always happen. Some body parts ignore the signals and are much the same size in every individual – the genitals of many insects are a good example. Others, like the rhino beetle’s borns, are hypersensitive and grow huge, out of all proportion to the rest of their bearer’s anatomy. Emlen studied the beetles’ horns by interfering with their insulin receptors, the molecules that insulin docks with. Without these receptors, insulin becomes a messages without a listener – it has no influence. Emlen silenced the receptors when the beetles were finishing up their larval careers, and ready to transform into adults. At this point, their body size is roughly set, but their adult body parts, like horns, wings and genitals, were still getting bigger. The loss of insulin signals didn’t affect the beetles’ genitals – they were the same size as those of normal insects. It did, however, make their wings around 2 percent smaller. And it made their horns a whopping 16 percent smaller. This means that the horns are 8 times more sensitive to insulin than wings (which are representative of most other body parts). Insulin and IGF help to set the size of many other exaggerated animal ornaments, including the antlers of red and fallow deer, the horns of dung beetles, and the giant claws of some crustaceans. You can understand why. These hormones have been coupling the growth of animals to environmental conditions for half a billion years. They form a widespread system, and an easy one to tweak. If a body part becomes subtly more sensitive to these signals, then – Bam! – it’s free to outpace the rest of the body in size. Here’s the important thing: a change like that would necessarily produce body parts that honestly indicate their owner’s quality. Weak, starving individuals can’t produce big ornaments, because the size of those ornaments is tied to their insulin levels and their insulin levels are tied to their nutritional state. They can’t fake their way to showiness. This is a subtly different explanation to the one that’s often put forward to explain the evolution of flashy animal ornaments – the handicap principle. It states that low-quality individuals can’t bear the cost of, say, a long tail or a magnificent set of antlers. They would be too conspicuous or heavy. They need strength and health to pull off. Cheats couldn’t bear the burden. You can understand how the handicap principle would work for a signal that’s already exaggerated, but obviously, those signals didn’t start off that way. They would have had much humbler and smaller origins, when the costs of bearing them would have been low. So, at this early stage of evolution, why didn’t weak individuals cheat by producing larger ornaments? Emlen’s rhino beetles provide an answer. The signals can’t be faked not because they’re a drain, but because they’re intimately tied into an individual’s physical condition. It’s not that cheaters can’t carry the burden of big ornaments. It’s that cheaters can’t exist. Reference: Emlen, Warren, Johns, Dworkin & Lavine. 2012. A Mechanism of Extreme Growth and Reliable Signaling in Sexually Selected Ornaments and Weapons. Science http://dx.doi.org/10.1126/science.1224286More on extreme body parts: From 250 million years of repression, a wonderland of hatsGiant squid, what big eyes you have. All the better to spot sperm whales with, my dear.