To understand how adult Tyrannosaurus rex rose to world domination, you must look at how they grew up from babies. 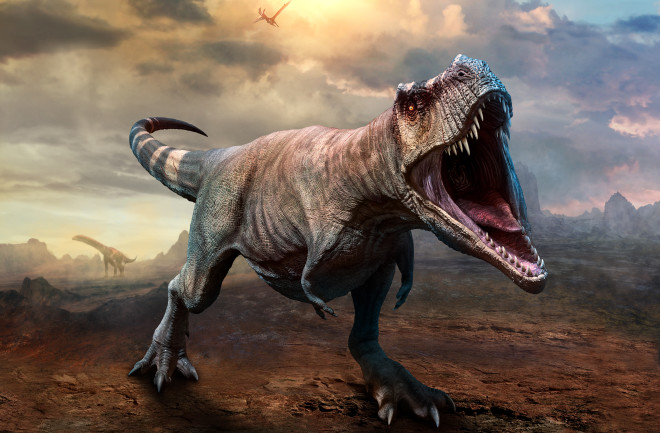 Tyrannosaurus rex was a dinosaur that lived up to its name. If you were to visit its haunts between 68 and 66 million years ago, you wouldn’t find another carnivore quite like it. Growing up to 40 feet long and weighing as much as nine tons, the dinosaur was far larger than any other meat-eater of the time. And that’s strange. In other times and places, habitats were full of carnivorous dinosaurs of all sizes. How did the “tyrant lizard” come to stomp out the competition?

The way T. rex grew up holds the key. At this week’s virtual Society of Vertebrate Paleontology conference, scientists have pointed out how the big, meat-munching dinosaurs had a disproportionate effect on the landscape just by how they aged during their lives.

When they hatched, baby T. rex were about the size of a chihuahua. These little nippers didn’t look quite like their parents. They were a little more awkward, with long legs and short, shallow snouts. As they grew up, though, they began to change, their jaws becoming longer as they packed on body mass. By the time they were adults, T. rex had wide, deep skulls with powerful jaws, capable of cutting flesh and punching through bone. In short, baby, adolescent and adult T. rex were so different from each other that they acted almost like different species. “The transition from a baby T. rex to an adult T. rex is truly fascinating,” Oklahoma State University paleontologist Evan Johnson-Ransom says.

The dramatic changes T. rex underwent may have allowed the dinosaur to take up a greater amount of ecological space than other meat-eaters that came before it. Consider the number of carnivorous dinosaurs on the landscape long before T. rex, during the end of the Jurassic. This was the time of favorites like Allosaurus and Ceratosaurus, large carnivores of the ancient floodplains. But they shared their habitats with an array of medium- and small-sized carnivores, all of them connected in a complex food web. Carnivores from the size of ravens all the way up to 40-foot-long monsters all lived in the same place.

By the time of T. rex, though, the largest non-T. rex carnivore was about the size of an adult human, with a huge gap between these smaller raptors and the tyrant king. To put it another way, it would be like visiting the grasslands of East Africa today and not seeing any carnivores between the size of a bat-eared fox and a lion, as University of New Mexico paleontologist Kat Schroeder pointed out in her presentation.

Differences in size translate to differences in diet. “Carnivores will have their own respective niches and hunt prey that best suits them,” says Johnson-Ransom, meaning that T. rex of different ages ate very different foods. Babies were not taking down Triceratops and adults were not pouncing on juicy insects.

Given that the fossil record is incomplete to start with, though, could it be that paleontologists just haven’t found the mid-sized carnivores yet? That’s unlikely, University of Maryland paleontologist Thomas Holtz, Jr. notes, because experts have been sampling the geologic formations where large tyrannosaurs are found every year for over a century. In that time, Holtz says, experts haven’t found a trace of medium-sized carnivores living alongside big tyrannosaurs — not even isolated teeth. Schroeder found a similar pattern in her research. “We’re observing a somewhat unique situation in which only certain body size classes from certain groups are missing from Mesozoic communities,” Schroeder says. The gap seems to be real.

The looming question is how tyrannosaurs managed to stage their takeover. They were not the first or only form of meat-eating dinosaur around. In fact, the earlier tyrannosaurs that lived around 160 million years ago were tiny, with “much more blade-like teeth and weaker bites” Holtz says. It was only around 80 million years ago that tyrannosaurs staged their coup in the Northern Hemisphere. That’s when tyrannosaurs showed a big change, with deeper, bone-crushing skulls, small arms and increased speed and agility. These changes go along with the proliferation of horned dinosaurs and duck-billed dinosaurs — both favored prey — and, Holtz notes, the sudden absence of other forms of predatory dinosaurs may have given tyrannosaurs an opening to evolve into new roles.

Future expeditions and research will certainly refine the story. Paleontologists know very little about the middle of the Cretaceous period, Holtz notes, and this is the critical time when tyrannosaurs were starting to change. And there’s lots more to uncover about what tyrannosaurs ate at different times in their lives. “There are specimens of the duckbill Edmontosaurus with bite marks from teenage tyrannosaurids,” Holtz notes, but experts should keep an eye out for tyrannosaur bite marks on smaller prey. Not to mention fossil feces — or coprolites — from younger tyrannosaurs that might contain bones that can identify the tyrannosaur menu.

The upshot, though, is that dinosaurs need to be understood on their own terms. How they lived is fundamentally different from any creature alive today, and, in the case of tyrannosaurs, that’s partly because of their impressive size. “An animal that is born from an egg the size of a volleyball that winds up as big, or bigger, than an elephant cannot help but pass through many ecological niches as it grows,” Holtz says. That means that big dinosaur species weren’t just one animal that behaved the same all its life. A single T. rex, Holtz says, “is practically the equivalent to an ecological community.”