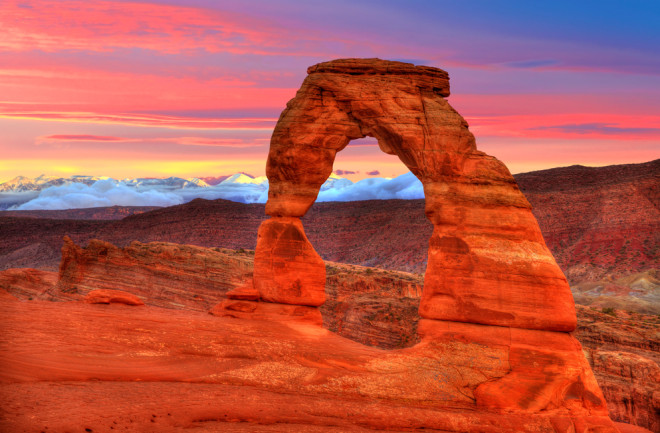 Many of us can think back on beachside memories of playing architect and trying to build the perfect sand castle only to watch that sand fall to the shore, knocked down by wind and water.

But civilians and scientists alike have looked at natural landforms made from sand like the Delicate Arch or the Double Arch in Utah’s Arches National Park and wondered just how that sand managed to form something so massive and durable.

While many researchers have argued that stress placed on sediments by gravity can add to natural weathering, a study published Sunday in Nature Geoscience is the first to use numerical models and physical experiments to provide a mechanism that explains how increased stress stabilizes sediment in a way that allows it to morph into the awe-inspiring, resilient structures we see today.

In order to study the mechanisms behind the formation of these structures, researchers selected two different types of sediment materials. The first was a solid sandstone that had to be cut with a water-cooled diamond saw. The sandstone is a strong material because it relies on cementation cohesion—particles stick together because of sheer compaction and pressure.

The second material was a type of sand (referred to as SLS) and relies not on cementation, but on fabric interlocking. Essentially, this sand’s structural strength comes from the way the individual grains sit on top of, or next to, one another. (Remember that bit for later.) This sand is so delicate that someone could cause a dry clump of it to crumble by simply grazing it with a paintbrush.

Once they had their materials in place, the team took samples of each sediment and cut them into various shapes, like cylinders and cubes, to try and create different land formations by exposing them to simulations mimicking the types of erosion that occur in nature.

Researchers created situations that replicated the effects of both rain and flowing water, and salt and frost. SLS samples that weren’t exposed to any pressure or load stress fell apart in about five to seven minutes, when rain or flowing water was involved. However, those samples that were bearing a load and under pressure reached a geometrically stable shape after about 60 minutes of exposure to the flow, leaving around 70 percent of the cube volume behind and intact.

When salt or frost conditions were thrown into the mix, the team used samples of cemented sandstones that were unconfined, or without any load-bearing pressure. These unconfined chunks of sandstone crumbled apart four times faster than the samples of cemented sandstones that were under pressure. These pressurized cubes eventually developed into thin, hour glass-like columns, much like many of the structures we see in nature.

The team found that, in order for these sediments to actually form the glorious configurations we see in our national parks, the fabric of the particles (or the way they fit together) has to be under a certain amount of pressure. When there isn’t enough stress on the particles of the samples, they will simply disintegrate into individual grains. And while most of the sample will keep disintegrating when it’s under increasing pressure, there comes a point when the pressure reaches a critical value and the grains don’tdisintegrate. The team coined the concept that explains this seeming contradiction the “locus of fabric instability.” Essentially, anything not under enough pressure is unstable and will erode away.

Now, the next time you happen across one of these natural wonders, you won’t have to spend your time puzzling over how it is all of those little grains of sand can stick together enough to make something so impressive. Just know it’s all in the fabric.