Sex expression in hundreds of species is remarkably flexible. Researchers are studying a variety of factors to see what makes trees, fish and other animals change from one sex to another. 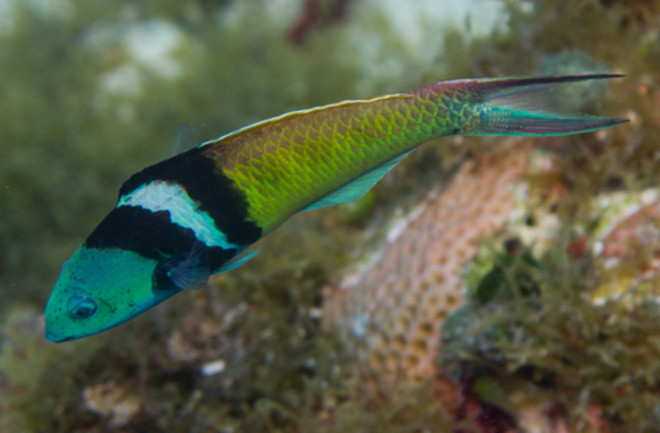 The bluehead wrasse can fully change from female to male in 10-20 days. (Credit: Leonardo Gonzalez/Shutterstock)

You may have heard this rhyme from a beloved “doctor”: “One fish, two fish, red fish, blue fish … some have two feet and some have four.” But Dr. Seuss was no biologist (nor a doctor, for that matter). Otherwise, his fish story might have turned out even stranger.

Instead of two feet, some fish have two sexes. Some change from male to female, and vice versa. And it’s really not that unusual — as many as 500 fish species can change sex in adulthood, along with plenty other animals and plants.

Researchers today are unraveling the many elements that determine the sex of an organism. While genetics are a predominant factor, recent studies point out that stress, trauma and climate can contribute to sex as well. The ongoing work reveals surprising flexibility of sex expression in living creatures and a network of social and environmental cues that influence it.

“If I’ve learned anything in studying all of this, it’s that sex expression is anything but straightforward,” says Jennifer Blake-Mahmud, a biologist at Colgate University.

The Truth About Nemo

Finding Nemo got it wrong. The Disney film follows a single father clownfish who leaves his anemone home in searching of his son, Nemo. Blake-Mahmud says the ability for some adult fish to change sexes, and clownfish dynamics in particular (they’re all born males), throws a wrench into the premise. “Dad would turn into Mom, and the next biggest male in the anemone would turn into Dad,” she says.

While Blake-Mahmud primarily studies plants, similar principles of environmental influence and flexible expression play out in trees, birds and reptiles. Many researchers have documented fish changing from female to male, such as the bluehead wrasse.

A major study published last year in Science Advances reported how removing the dominant male from a group of bluehead wrasse “induces rapid and complete sex change of the largest female” in a matter of days. That work in the Florida Keys tracked the changes on the molecular level, documenting how certain estrogen levels collapsed in female fish, leading to fully developed male organs within 20 days.

The study highlighted stress as a key factor triggering sex plasticity. In this case, the lack of a dominant male seemed to be a social cue prompting the females to change to males. And another recent study documented male-to-female sex changes in trees, prompted by physiological stress and trauma.

Earlier this year, Blake-Mahmud published a report on how physical trauma can cause striped maple trees to change from male to female. Her study, “When the Going Gets Tough, the Tough Turn Female” published in the American Journal of Botany, involved two years of monitoring specific trees. And mistreating them.

“I went out and basically harassed a bunch of trees in different ways. I pulled off all their leaves. I cut off all their branches,” Blake-Mahmud says.

The outcome was not that all male trees turned female. But as the severity of trauma increased, so did the chances of turning from male to female. When all leaves were removed from specific trees, their odds of flowering female the following year were 4.5 times higher.

“Damage is a cue here for sex changing in this species,” she says.“And we found that it’s really the most significant and severe types of damage that correlate with changes from male to female.”

This study captures one of many examples in nature where the environment, rather than chromosomes, plays the dominant role in sex determination.

Most people are familiar with genotypic sex determination. That’s when chromosomes, such as X or Y, call the shots in cellular and structural development. The second common driver behind male, female or intersex development is environmental sex determination, where factors such as temperature control the sex of an organism.

While tradition has leaned toward a dichotomy between these two processes — one mechanism or the other determining the fate, depending on the species — mounting research suggests that sex development is not that simple, says Daniel Warner, an evolutionary ecologist at Auburn University.

“There’s much more evidence these days that it’s a continuum. You have a little bit of genetic influence and some environmental influence working together,” he says. “The environment can still override the genetic effects.” That means that external biology and behaviors sometimes appear female in an organism, while its genetic makeup is male — and vice versa — depending on environmental conditions.

Known contributors to environmental sex determination in some invertebrates, birds and plants now include population density, sun intensity and parasitic load, Warner says. Temperature remains the most prominent factor and the most studied. The bulk of Warner’s work has analyzed sex determination in reptiles, including some turtle and lizard species where temperature directly correlates to whether a male or female emerges from an egg.

Warner says emerging research on sex determination has direct implications for species viability in a rapidly changing climate. Consider, for example, the thousands of sea turtle eggs buried in the sands of beaches around the world.

A 2018 study in Current Biology did just that, focusing on green sea turtles near Australia’s Great Barrier Reef. The results, which compared cooler and warmer nesting beaches, showed a 99 percent female bias in some instances. The study reports that populations “producing primarily females for more than two decades and that the complete feminization of this population is possible in the near future.”

Blake-Mahmud also points to climate change as a daunting variable related to striped maples changing sex in response to trauma. “Change in climate is going to affect temperature, but it affects so much more than that,” she says.

When these factors inform sex ratios, questions arise about sustainability. If the climate shifts too rapidly, the sex-changing attributes that have historically helped preserve a species could begin to hurt it. Only time will tell which species will bear the biggest brunt of a warming world.