How Social Media Helped Uncover a Skunk That Uses Tools 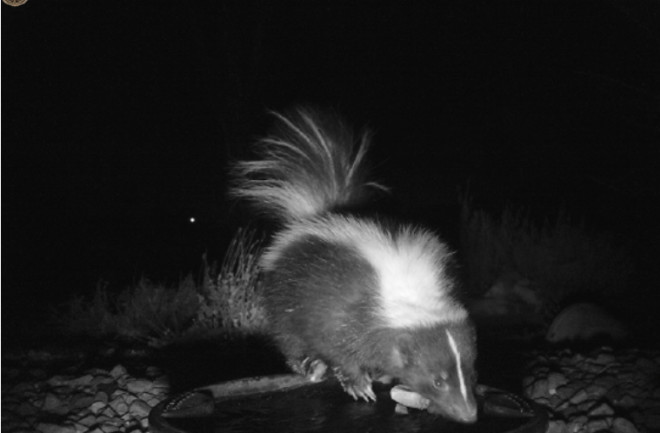 Two holes in the ice caught Sue Dickerson’s attention when she checked a black plastic water dish in her yard one morning in February 2018. The temperature had dropped to 18 degrees Fahrenheit overnight, so it didn’t surprise her that the top layer of water in the dish had frozen. But what had made those holes? She studied them for a moment. “Flickers,” she thought to herself. The woodpeckers often hung out in her Colorado Springs, Colorado, front yard and had likely pecked through the ice to get a drink. Dickerson, who had stepped outside to grab the photo card from the motion-activated camera she’d set up near the dish, crouched, hooked her index finger into one of the holes and tossed the ice.

Back inside, she settled in front of her computer monitor and started clicking through the photos. It had been her routine for more than a decade to retrieve the card around 7:30 each morning, then check for shots of wildlife that had wandered onto her property in the middle of the night. She’d captured close-ups of badgers, bears, pocket gophers — even bobcats. So she wasn’t surprised that the first photograph, taken at 4:01 a.m., was a skunk with its nose poking over the edge of the dish.

A first, caught on film by a backyard camera trap: a skunk using a rock as a tool. (Credit: Suzanne Dickerson)

Her heart beat a little faster, though, when she looked more closely and saw what looked like a rock in the skunk’s front left paw. In the next photo, the front half of the skunk’s body was on top of the ice and it appeared to be using the rock to break the ice; the third photo seemed to show the animal drinking. “I have had a camera in my garden since 2008, so I have seen thousands and thousands of pictures of skunks,” Dickerson says, “and I have never ever seen one holding a rock in its paw.”

Little did she know that not only had she made an unlikely observation — scientists believe less than 1 percent of animals use tools — but she was also about to become part of a growing phenomenon. As technologies that were once the exclusive province of professionals, such as motion-detecting cameras and telephoto lenses, find their way into the hands of more laypeople, the amount of photographic documentation of wildlife has exploded. Now, often through the use of social media, those data are being discovered and used by researchers. “I think there’s huge potential for this kind of collaboration between scientists and keen amateurs,” says Christian Rutz, a professor at the Centre for Biological Diversity at the University of St. Andrews. “We’re starting to see some of the first examples of people doing this, but I think there is much more to come.”

Rutz recently co-authored a paper with a photographer while compiling a timeline of observations of nuthatches, small songbirds, using tools. Rutz had found four published reports of the behavior in the academic literature — from 1968, 1993, 1995 and 2016 — but none offered photographic evidence of the birds at work. At the last minute, Rutz thought he’d better double-check. “I did a classic Google image search, ‘nuthatch tool use,’ just to make sure,” he says. Up popped a page from gardenbirdwatching.com, a blog created by Simon Deans, a retired supermarket executive. On it were several photos of a Eurasian nuthatch using a piece of wood to try to lift up a patch of willow tree bark, presumably looking for something to eat.

Deans had spotted the unusual phenomenon in June 2013, while strolling through a park near his home in south London. He’d been at the park photographing birds for several hours and needed to leave to pick up his daughter from school, but it was then that he noticed two nuthatches flitting around a willow tree. He raised his telephoto lens and watched them for a while. Then as one of the birds picked up the wood and tried to pry up some bark, he started snapping. “I was quite lucky that I managed to get the photographs,” he says.

He received a handful of congratulations on his Facebook page but no one who saw the pictures recognized their significance — until Rutz, who, despite his own excitement, was reserved when he first got in touch with Deans. “I wanted him to tell me in all honesty the details of that observation without me prompting certain answers,” he says.

He and other scientists say they must be careful interpreting data collected by laypeople, and they don’t believe data gathered via social media or other online sources should be seen as an alternative to fieldwork. Nevertheless, they feel it would be foolish for researchers not to tap into such a resource. “We’re undergoing very rapid environmental changes at the moment, from land conversion to climate change. And the challenge is that, particularly for the kinds of animals we study with camera traps, we have very little data. They’re all nocturnal forest animals that hide away,” says Marcus Rowcliffe, senior research fellow at the Zoological Society of London. He recently co-authored a paper calling for a global, interconnected network of remote motion-detecting cameras to monitor biodiversity. The effort would include training citizen scientists to set up and retrieve photos from camera traps in the wild.

“Such a network would not be a trivial thing to set up,” Rowcliffe says, “but could have huge benefits.”

The work of amateur photographers has increasingly helped researchers looking for rare or undocumented animal behaviors. Above, a nuthatch in a city park uses a stick to pry up tree bark. (Credit: Simon Deans)

One benefit could be a better understanding of how different species are adapting to climate change. Emiliano Mori, an evolutionary biologist at the University of Siena, wanted to learn more about interference competition — when one species chases another away from a resource they both want — between roe deer and chamois, a type of mountain goat in the Western Alps. The two species only recently have begun interacting, he says, as climate change brings the roe deer to higher altitudes. When he checked the academic literature for evidence of these interactions, Mori came up empty. So he turned to Facebook pages created for Italian amateur wildlife photographers, and found 67 photographic examples. “I told them they were going to be part of a research paper and they happily participated,” he says of the photographers.

Dickerson also connected with a scientist after she saw her shots of the skunk with the rock. She quickly posted several on her Twitter account along with the comment: “Do skunks use tools? I may be reading far too much into these photos.” Then she went to make a cup of tea. “Normally, if I get 25 or 50 likes, that’s pretty good for me,” she says. “I went and made my tea, then came back just to see if anybody had perhaps retweeted it … and I saw I had 100 notifications. I started going through them and thought, ‘Oh wow, this is terrific, other people are seeing what I’m seeing.’ ”

One of the first to respond to the tweet was Mario Pesendorfer, a postdoctoral researcher at the Cornell Lab of Ornithology, who studies animal behavior. He reached out and asked Dickerson if she’d like to be a co-author on a research paper about the tool-using skunk. Nine months later, the two, along with a third author, Jerry Dragoo, an expert on skunk behavior, published the finding in the journal Ecosphere.

Having her photographs in a scientific journal after 10 years of using camera traps was hugely satisfying to Dickerson. But the best part about the whole process, she says, was the reaction from her two daughters. Though normally their eyes glazed over when their mother starting talking about her hobby, that wasn’t the case when Dickerson showed them the photos and told them she was probably the first person to have captured skunk tool use on film.

“No!” her daughters exclaimed. “There’s no way you’re the first person to do that.”

Dickerson laughed. “I know you wouldn’t think so,” she replied, “but I really think there’s a chance that I’m the first.”

Nancy Averett is a freelance writer covering the environment. This story originally appeared in print as "#Wildlife."