How Sliced Meat Altered the Course of Human Evolution 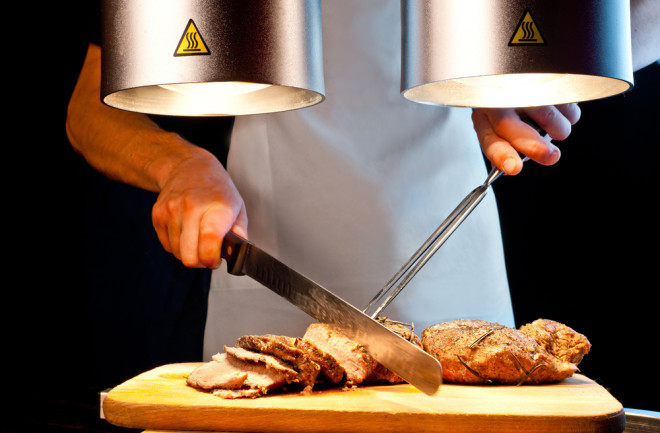 (Credit: RossHelen/Shutterstock) Taking fewer bites during meals may have contributed to human evolution in a big way. Researchers at the Department of Human Evolutionary Biology at Harvard University published a study suggesting human teeth and jaws started shrinking once our ancestors figured out how to use primitive tools to process their foods prior to eating. Slicing, pounding and mashing meat and vegetables allowed us to spend less energy chewing, which, researchers say, led to a gradual decline in the size of the jaw muscles and teeth that were called upon to accomplish this task. While the decline in jaw and tooth size is well-known, this study replicated ancient diets with modern humans, and provides the first empirical evidence to support the link between a change in diet and tooth and jaw size. Researchers believe easing the burden of mastication may have triggered monumental changes in human evolution. They say smaller teeth and jaws may have altered our speech patterns, how we regulate body heat and could have even affected the size and shape of our brains.

For their experiment, the researchers asked 34 subjects to chew samples of foods that were likely part of our ancestors' diet 500,000 years ago. Two groups of participants chewed on yams, beetroots and carrots, while a third dined on goat meat. Using electrodes attached to their jaw muscles, the researchers measured the amount of force they applied each time they chomped down. By combining the force of each chew with the number of times they had to chew, researchers could approximate the amount of energy spent consuming their food. And, instead of swallowing, the participants spit the food back out so scientists could evaluate how well they ground it up. As our ancestors developed tools and discovered fire, they would have had access to a broader range of food preparation techniques, and researchers attempted to simulate some of those early methods. They ran the experiment under four different conditions and fed participants food that was unprocessed, pounded or mashed, sliced and cooked. It was all in an attempt to determine if culinary advancements were tied to changes in how we ate, and more importantly, how we looked.

Microscopic views of the tiny food particles chewed up and spit back back out by participants in the study. Credit: Zink & Lieberman/Nature When comparing the raw, untouched food to meat and vegetables that had been cut up, pounded or cooked, the researchers found that our ancestors would have chewed 17 percent less and with 26 percent less force eating a processed diet of one-third meat and two-thirds vegetables. Simply pounding vegetables and slicing meat would have improved humans' ability to break food down into smaller particles by 41 percent. The researchers say that works out to roughly 2 million fewer chews per year, which is a lot less work for our teeth and jaw muscles. The researchers published their work Wednesday in the journal Nature.

Over time, as food processing skills improved, ancient humans didn't need giant molars and oversized jaw muscles, and the sizes of both shrunk over the past 2 million or so years. Researchers think that the composition of our diets played a role in this change as well. Humans started consuming an increasingly meat-heavy diet as they evolved, likely a function of better hunting tools and tactics. Meat is also a richer source of calories than most plants, giving ancient hunters more bang for their buck. Combined with cooking techniques that made the process of eating easier, hominids began consuming more calories with less effort, which may have paved the way for larger, energy-hungry brains. The researchers think that it was a combination of new food preparation techniques, helped along by the development of tools, and a shift toward a more carnivorous diet that drove these critical changes in our physiology. Today, chewing is an afterthought for most of us — our food is processed to the point where we can swallow it with ease. Compare that to chimpanzees that spend five to 11 hours chewing on a small animal, researchers estimate. In terms of human evolution, less turned out to be more, and breaking our food down before it touched our mouths may have carried significant advantages. Still, that's no excuse to skip out on chewing dense food like meats and vegetables up to 30 times before swallowing, as recommended by the experts.