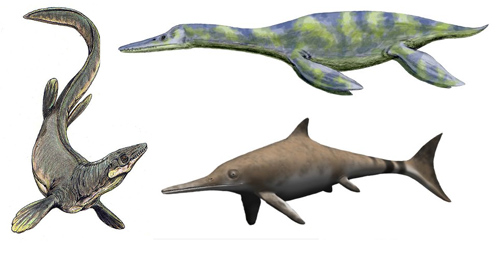 For humans and most other mammals, sex is a question is chromosomes. Two X chromsomes makes us female while an X and a Y makes us male. Birds use a similar but reversed system, where males are ZZ and females are ZW. But for reptiles, including crocodiles, turtles and many lizards, sex is determined not by genes, but by temperature.

In crocodiles, males hatch from eggs incubated at cooler temperatures while warmer conditions produce females. In turtles, it's the other way around, and lizards use a variety of criteria including some very complicated combinations of genes, temperature and even size of egg.

But what did extinct reptiles do? It's not exactly easy to tell for genes and temperature don't fossilise. However, fossils can tell us about how such animals reproduced. For example, we know that three groups of marine reptiles - the serpentine mosasaurs, the dolphin-shaped ichthyosaurs, and the long-necked, paddle-flippered sauropterygians - gave birth to live young through a seriesof stunningfossils of pregnant females, and even one case of a birth in progress (see below). Around 20% of living reptiles (excluding birds) do the same and the ability probably evolved at least 100 times in lizards and snakes alone.

Chris Organ from Harvard University thinks that, in all three lineages of marine reptiles, the evolution of genetic sex determination preceded the evolution of live births. By studying the reproductive styles and sex-determining methods of 94 species of amniotes (mammals, birds and reptiles), he showed that the two traits often co-evolve. Live birth almost always depends on first having a gene-based method of assigning sex, while egg-layers can use either chromosomes or temperature.

Organ suggests that these important changes were instrumental for the success of these prehistoric swimmers, allowing them spread throughout the open oceans, where temperatures can't be relied on to determine sex. And without the need to return to land to lay their eggs, they were free to live permanently at sea and evolve more extreme physical adaptations to an aquatic life, including paddle-like limbs, back fins, streamlined bodies and fluked tails.

Among the amniotes, every group that lives permanently in the sea gives birth to live young and relies on sex chromsomes to set the males apart from females. For whales and manatees, that's hardly surprising, for all other mammals do the same but it's notable that sea snakes use the same system too and they are the only permanent marine reptile. Others, like turtles, saltwater crocodiles and marine iguanas, are either tourists in the oceans or need to lay eggs on land.

Organ plugged all the data from his 94 living species into a mathematical model that could predict the likelihood that other species determined their sexes through genetic means. The model correctly predicted the systems used by animals such as the extinct horse Propalaeotherium, which also left behind fossils of pregnant females; the European asp, a snake that gives birth to live young; and the southern water skink, one of only twoanimals that uses temperature to determine sex but gives birth to live young.

Confident in his model, Organ used it on ten extinct species and it predicted with over 90% certainty that ichthyosaurs and sauropterygians used genetic sex-determination and over 99% certainty that mosasaurs did so.

Organ speculates that GSD evolved in the land-based or amphibious ancestors of all three groups, before they made the move to water. Their ability to set the sex of their offspring without having to worry about incubation temperatures freed them to diversify in the ocean environment.

Each event was a major one, sending a new wave of top predators into the oceans to compete with each other, and with existing hunters like sharks. Some of these newcomers did very well and grew to giant size - the ichthyosaur Shonisaurus, for example, was over 20 metres long.