How Pandas Survive on a Diet of Only Bamboo 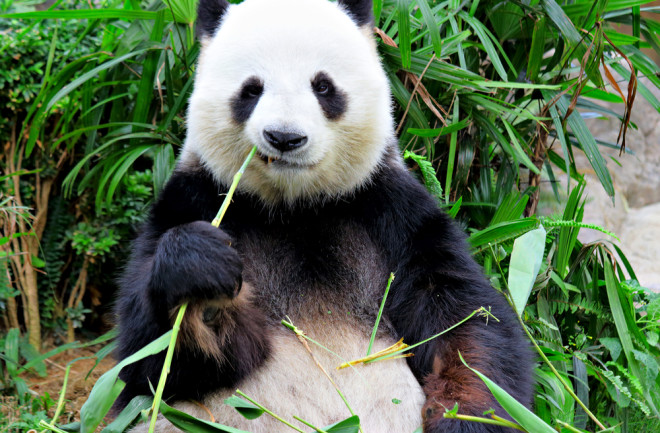 Being a vegetarian is no easy task: The difficulty of maintaining a balanced diet is enough to drive an herbivore back to the land of hamburgers and chicken wings. And human vegetarians aren’t the only ones who have to get creative with their diet — giant pandas do the same.

Until now, scientists have been uncertain how pandas fulfill their dietary needs through the consumption of only one, highly fibrous plant – bamboo. The new study answers this question: Pandas consume a mix of two bamboo species, as well as several parts of the plant, in order to meet their dietary needs.

Giant pandas have only recently acquired their herbivorous lifestyles. Their bodies still have the small stomach and short gastrointestinal tracts of their carnivorous ancestors, and they still require the protein and nutrients from a meat-based diet.

In a six-year study based on a panda reserve in China, researchers attached GPS collars to three male and three female pandas in order to observe what they ate within their natural habitat. The team then took samples of the animals’ various food sources in order to measure the nutritional makeup of the plants — specifically the amounts of nitrogen, phosphorous and calcium they contained. These three elements are the most essential aspects of a mammal’s diet.

The researchers found that pandas maintain a complicated food choreography over the course of a year. In the spring, pandas switch from the leaves of one kind of bamboo, wood bamboo, to its shoots, which are rich in nitrogen and phosphorous. As the shoots mature — and consequently loose nutrients — the pandas migrate to higher elevations and eat the shoots of a different plant, arrow bamboo, which have copious amounts of both nutrients. They switch again by mid-July, this time to eat the leaves of the arrow bamboo, which are rich in calcium. By mid-August, females return to lower elevation to give birth and return to feeding on wood bamboo leaves.

By repeating this pattern each year, pandas are able to maintain adequate levels of essential nutrients. Yet hardship and death are still common for the endangered species, with mortality peaking in March and April due to the low nutritional quality of winter leaves.

The team, whose study appeared online this month in Functional Ecology, also analyzed how these dietary choices affect pandas’ reproduction. Pandas mate in the spring, but the resulting embryo remains in a state of arrested development — a process called delayed implantation.

According to the researchers, the embryo does not attach to the mother’s uterus and continue growth until the mother switches to arrow bamboo leaves, at which point the calcium intake is the highest. They thus speculate that the embryo remains dormant until the mother consumes enough calcium for bone growth and eventual lactation.

The authors also see this as a possible explanation for pandas’ extremely short gestational period — about 2 to 3 months — and therefore their smaller young. Since the infants are born earlier, they can begin the weening process earlier. This means they can start to feed themselves earlier, which puts less stress on the mother, who no longer has to acquire enough nutrients for two.

Understanding how pandas feed themselves in the wild is an important step in the conservation of the species. By knowing what they eat, scientists can consciously create a strategy to protect the animals, along with their current and future food sources. While being a vegetarian might be hard, pandas prove that a little creativity goes a long way.