How mantis shrimps deliver armour-shattering punches without breaking their fists 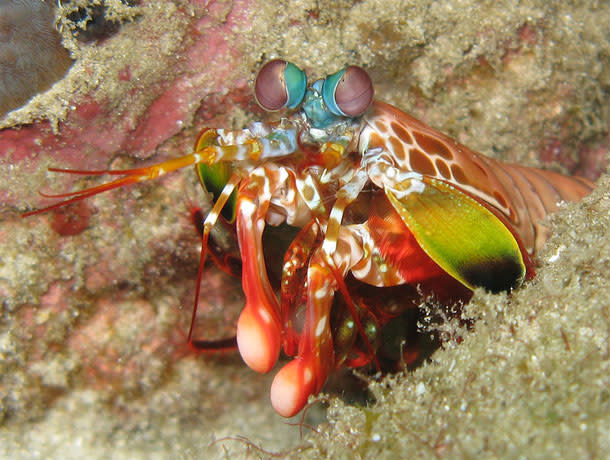 For engineers looking to create the next generation of armour, the ocean is the place to look. Animals from snails to crabs protect themselves with hard shells whose microscopic structures imbue them with exceptional durability, surpassing even those of most man-made materials. They are extreme defences. The mantis shrimp smashes them apart with its fists. That’s the animal that David Kisailus from the University of California, Riverside is studying. “People have been studying molluscs for decades because they’re thought to be very impact-resistant,” he says. “The mantis shrimp eats these guys for dinner.” Mantis shrimps – neither mantises nor shrimps –are pugilistic relatives of crabs and lobsters. Kisailus says that they look like “heavily armoured caterpillars”. They kill other animals with a pair of hinged arms held under their heads. In the “spearer” species, the arms end in an impaling spike, while the “smashers” wield crushing clubs. The smashers deliver the fastest punch of any animal. As the club unfurls, its acceleration is 10,000 times greater than gravity. Moving through water, it reaches a top speed of 50 miles per hour. It creates a pressure wave that boils the water in front of it, creating flashes of light (shrimpoluminescene – no, really) and immensely destructive bubbles. The club reaches its target in just three thousandths of a second, and strikes with the force of a rifle bullet. Against such punches, even the best armour eventually fails. But the mantis shrimp’s club doesn’t fail. It can deliver blow after punishing blow, breaking apart its prey without breaking apart itself. Kisalius knows why. His team – including James Weaver, Garrett Milliron and Ali Miserez – have unveiled the club’s microscopic secrets. 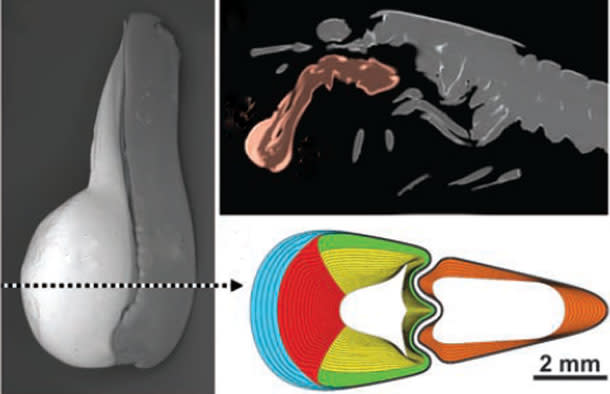 The “impact region” at the front of the weapon is understandably five times thicker than the outer surface of any of the other limbs (blue in the image above). It’s made of hydroxyapatite crystals – the same stuff in our bones, but more carefully aligned. Each crystal is like a column that’s angled perpendicularly to the surface. Together, they provide a lot of compressive strength. They can take up to 4 gigapascals of pressure before buckling; for comparison, engineering ceramics like silicon carbide or zirconia can only take 2 or 3. These ceramics are forged at 1,500 degrees Celsius; the mantis shrimp outclasses them with a body part that’s grown at room temperature. The impact region is around a millimetre thick. Behind it lies the “periodic region”, which is less stiff (red and yellow in the image). It’s made of fibres of chitin, the same substance that makes up most of the mantis shrimp’s shell. Again, it’s the arrangement that matters. The fibres come in stacked layers. In each one, the fibres are all parallel, but each layer is rotated slightly from the one underneath it to produce a helical structure. Finally, the space between the fibres is filled with haphazardly arranged minerals. This structure is adapted to stop cracks from spreading through the club. If any form, they travel along a helical path between the fibres rather than breaking them apart. And since they have to constantly change directions, they quickly lose energy and stop growing. This is a common theme in natural armour. Human structures are designed to prevent cracks from forming as far as possible and when they do form, they create catastrophic results. Animal armours allow cracks to form, but control their growth. 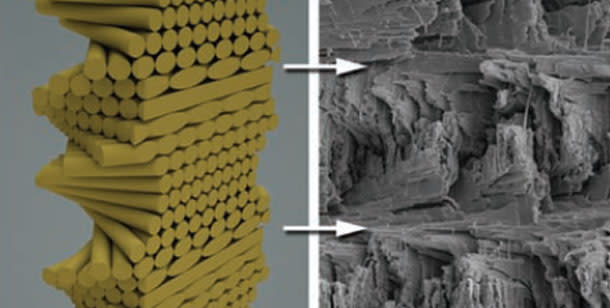 Finally, the mantis shrimp’s club has chitin fibres wrapped around its sides (green in the image), which compress the entire structure and, again, slows the spread of any cracks. “It’s like a boxer who places tape around their fists,” says Kisalius. He now hopes that we can use the structures that the mantis shrimp has evolved over 300 million years to design man-made structures in a far shorter time. While many other animals wield hard shells, most are either defensive armour (like snail shells) or weapons adapted for exerting slow crushing forces (like crab claws). The mantis shrimps stand out for having offensive weapons that deliver fast smashes. Kisalius should know. He has felt them firsthand. “I worked up the guts to put on six layers of gloves and parafilm around them to feel what it’s like,” he says. “It hurt like hell.” Reference: Weaver, Milliron, Miserez, Evans-Lutterodt, Herrera, Gallana, Mershon, Swanson, Zavattieri, DiMasi, Kisalius. 2012. The Stomatopod Dactyl Club: A Formidable Damage-Tolerant Biological Hammer. Science http://dx.doi.org/10.1126/science.1218764Image by Prilfish; others by Kisalius lab. More on mantis shrimps (I haven’t even mentioned the eyes in this piece):