How Mantis Shrimp Punch So Hard Without Hurting Themselves 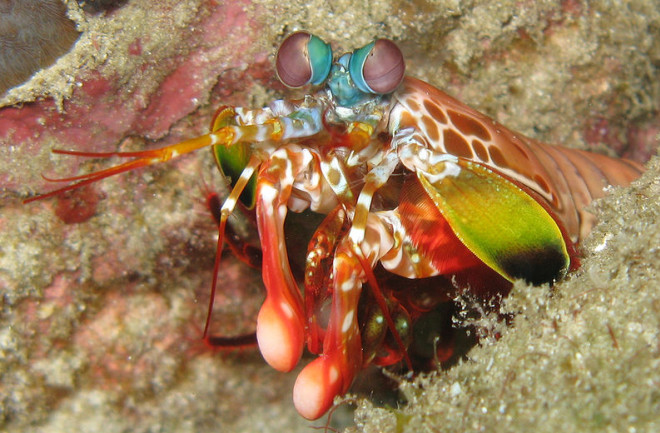 Watch out for those fists! (Credit: Wikimedia Commons)

Oftentimes, throwing a punch at something (or someone) ends up hurting the hand behind it more than anything else. Bruised skin, sore knuckles and even cracked wrists can result from an ill-fated punch, and that’s just with human-level strength. Just imagine what it’s like to be a mantis shrimp.

Mantis shrimp might just be the best boxers in the world. They smash apart shellfish with oversized, teardrop-shaped forelimbs that can snap out with more acceleration than a .22 caliber bullet — one “punch” can deliver over 1,500 Newtons of force. It’s enough to shatter aquarium glass and even dismember the mantis shrimp’s prey. It’s so fast, in fact, that their clubs leave cavitation bubbles — pockets of air created by fast-moving liquids — in their wake. Those bubbles likely implode with enough force to stun prey even if the mantis shrimp happens to miss.

To deliver that kind of blow, the crustaceans need an appendage that can withstand crushing forces over and over again without breaking apart. After all, a punch is no good if it incapacitates you too.

After analyzing the internal structure of the mantis shrimp hammer, researchers from the University of California-Riverside think they know how they do it. The clubs that mantis shrimp use to bludgeon prey to death are composed of three distinct layers, they say, optimized to minimize and distribute the amount of force that each blow delivers back to the shrimp’s club.

The first layer of protection is a thin covering of the mineral hydroxyapatite, found in hair and teeth and in the chitin that forms insect shells. But for mantis shrimp, the hydroxyapatite is in a highly crystalline, and thus harder, form. That means it doesn’t flex much, minimizing the force that is transmitted through it to the softer layers beneath. The rigidity also ensures that most of the force from a blow gets delivered to the target, rather than rebounding into the club itself.

The next level is composed of the same mineral, though in a softer form and arranged in a series of layers stacked on top of one another. Each layer is rotated slightly from the one beneath to form a kind of helix that redirects cracks in the material into a spiral and prevents them from penetrating all the way through. It’s a way of mitigating the damage that inevitably occurs over time due to repeated blows.

Finally, wrapping around either side of the club is a series of chitinous fibers that hold the rest of the club fast and prevent it from expanding on impact. The researchers compare this last layer, which was the focus of their latest paper published Tuesday in Advanced Materials, to the cloth wrappings that boxers bind their hands with to provide stiffness and support. In both cases, the goal is the same: Prevent the hand (or club) from moving by keeping everything wrapped up tight.

The end result is a structure that’s extremely hard and immobile, perfect for smashing into other hard things over and over again. Mantis shrimp do eventually grow new pairs of clubs as part of their regular molting process, but most of the damage seems to be on the outside, not the inside. It’s probably a side effect of their speedy punches — the cavitation bubbles that their clubs create can damage the surface over time, in much the same way as the bubbles damage ship propellers and other high-speed mechanical components.

The structure of the “smasher” mantis shrimp club actually looks very similar to that of their close relatives, the “spearers.” They’re the other kind of mantis shrimp, and they strike with the same lightning speed, though they opt for a more pointy mode of attack. These mantis shrimp have sharp spears instead of clubs, and they usually go after softer-bodied prey like fish. The spearers evolved first and the smashers came after, researchers think, likely as a response to the appearance of hard-shelled prey that a spear couldn’t penetrate.

The researchers hope that their insights will help in the creation of stronger body armor and protective sports equipment, as well as materials for the aerospace industry. Though we should probably stay away from mantis shrimp either way.