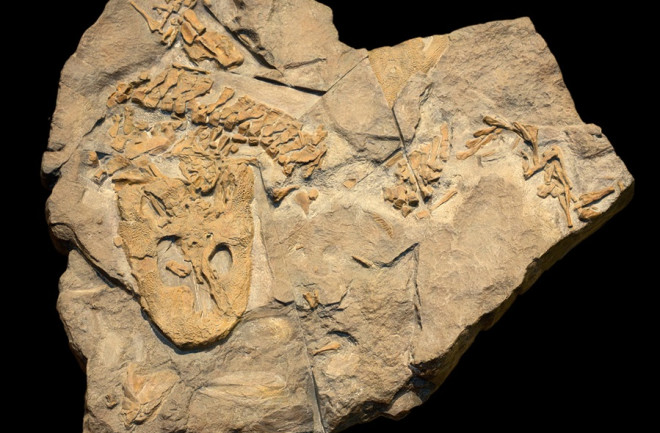 More than 350 million years ago, our distant fishy ancestors traded in the life aquatic for land. Once ashore, these four-limbed vertebrates, called tetrapods, branched into an impressive range of animals: amphibians, reptiles, dinosaurs, birds and mammals. The fossil record shows that as species evolved to fill particular ecological niches, a few of the tetrapod clan lost limbs (snakes), turned arms into wings (bats, birds and pterosaurs) or decided the heck with dry land and headed back to sea (including whales, seals and some marine reptiles).

The tetrapods’ move to land has long been one of the great evolutionary puzzles. Fossil finds from this transitional period are too few to explain why or how it occurred, or exactly when the first fully terrestrial tetrapods evolved. Even so, researchers are getting closer to piecing it all together.

The tetrapod story starts with lobe-finned fishes nearly 400 million years ago. Unlike ray-finned fishes, which make up the majority of fish species today, the lobe-finned varieties evolved with bony limb-like fins, a handy adaptation (no pun intended).

During the late Devonian period, starting about 375 million years ago, transitional “fishapods,” with both primitive, fish-like traits and adaptations for semi-aquatic living, begin to appear in the fossil record. Although these species had evolved stronger limbs with defined digits, they still weren’t truly tetrapods. “All of them are a little weird,” says Cambridge University professor emeritus Jennifer Clack, the grand dame of early tetrapod research. “None of them are like tetrapods from later on. Thirty million years later, they’re running about.”

Researchers have yet to find the species that can link early fishapods with fully terrestrial tetrapods. We may be closer to understanding how the transition happened, however.

In the early tetrapod hotspot of southern Scotland, for example, researchers discovered that tetrapods apparently moved to land during a wetter period: Many of the tetrapod fossils turning up there have been found in what were seasonal floodplains. It’s possible that aquatic tetrapods swam into shallow waters — or were washed in during storms or seasonal monsoons. There, vegetation may have sheltered them from the sun, preventing them from drying out.

As researchers continue to hunt for the first landlubbers in our lineage, here’s what we know so far.

While the fossil record from this slice of the Paleozoic Era is too incomplete to say whether any of these animals were directly related or just distant cousins, the species represent the transitional nature of the vertebrate move from water to land.

Eusthenopteron (385 million years ago): Known from thousands of fossils, the lobe-finned fish’s four meaty limbs have the same pattern of bones seen in the limbs of all tetrapods: a single bone nearest the body (your arm’s humerus and your leg’s femur), two bones farther out (your arm’s radius and ulna and your leg’s tibia and fibula).

Tiktaalik ( 375 million years ago): Found at a single site in the Canadian Arctic, this transitional fishapod had a number of skeletal quirks, including 45 or more vertebrae. It also had the beginnings of a neck and a primitive wrist, as well as a middle ear — tetrapod traits not seen in fish.

Acanthostega (365 million years ago): Like its rough contemporary Ichthyostega, another early tetrapod, this creature had evolved digits — lots of them, as many as eight per limb. Acanthostega is also the first tetrapod with a sacrum, strengthening the pelvis-hind limb connection. Researchers believe it was still fully aquatic but may have “walked” in the shallows.

Pederpes (350 million years ago): This Scottish find is the earliest with five functional digits, a pattern that would dominate later tetrapods. The roughly meter-long animal also appears to have been capable of four-limbed locomotion on land, though researchers believe it spent at least some time in the water.

How to Be a Landlubber

1. Locomotion The muscles and bones in lobe-finned fish appendages gave tetrapods, ahem, a leg up on adapting to life on land. The first vertebrates to forsake the seas probably didn’t walk or even crawl, however. A 2012 reconstruction of early tetrapod Ichthyostega suggests that it couldn’t bend side-to-side like lizards do as they walk. It’s more likely the animal “crutched,” like the modern mudskipper, using both front limbs simultaneously to propel itself forward. The shoulders and pelvis of early tetrapods expanded and strengthened, allowing for load-bearing on land.

2. Respiration The common ancestor of both ray-finned and lobe-finned fishes had primitive internal air sacs that allowed them to breathe air. For ray-finned species, these sacs evolved into bladders for buoyancy control. For lobe-finned fishes’ tetrapod descendants, however, the sacs evolved into lungs. Moving around on land required significantly more huffing and puffing — and oxygen — than swimming for early tetrapods. Some researchers believe the atmosphere when vertebrates were heading ashore had significantly higher levels of oxygen (30 to 35 percent rather than today’s 21 percent), which may have made moving on land easier for the animals.

3. Food Acquisition If you crawled or crutched your way from water onto land, your biggest challenge wasn’t breathing or moving around; it was swallowing your food. In water, fish can change the pressure in their mouths to force water and food, which have about the same density, into their esophagus. On land, the difference in density between air and food makes that mechanism a no-go, and helpful adaptations such as tongues and specialized jaw shapes would not evolve until millions of years after the transition to land. A 2013 study found that modern eel catfish grab prey on land with their jaws but return to water to swallow the meal. It’s possible transitional tetrapods did the same thing.

4. Sensory Systems In March, researchers found that tetrapod eyes tripled in size just before they transitioned to land. While that kind of increase would not have helped the animals see better while swimming, it would greatly expand their vision out of water. At about the same time, the eye position moved from the side to the top of the skull, as seen on some transitional species, such as Tiktaalik. The combination of better vision out of water and eye location suggests that these fishapods may have hunted like modern crocodiles, lying in wait in the shallows to ambush prey on the shore.

The Trouble With Trackways

In 2010, the apparent discovery of terrestrial tetrapod tracks in Poland’s Zachelmie quarry made headlines. At more than 390 million years old, the trackways would predate by tens of millions of years the period we thought tetrapods left water for land. In 2015, however, another study suggested the depressions were from a fish nest, or imprints of a fish feeding in a circular pattern. Until researchers find bones associated with the “trackways,” or at least from the same period, we can’t be confident about what animal made them, or how.

A group of scientists believed the fossilized imprints in this slab were made by a tetrapod. But that theory was called into question in 2015. (Credit: Niedzwiedzki et al. 2010, Nature (463)43-48)

Burnmouth Harbor, shown at low tide, is one of several sites in Scotland where researchers dug for tetrapod fossils. The work, part of a project called TW:eed, paid off. In 2016, team members described five new species of tetrapods from Romer’s Gap, a span of millions of years nearly bereft of tetrapod discoveries. (Credit: Center for Biology and Society/Arizona State University)

Some of the most exciting research on tetrapods has come from an interdisciplinary project based in the United Kingdom. Tetrapod World: early evolution and diversification (TW:eed) re-created the environments these distant relatives called home. The team also continued filling in Romer’s Gap, a span in the fossil record from about 335 million to 360 million years ago that had long vexed paleontologists. On the far side of the gap, named after Alfred Romer, the Harvard University researcher who first noticed it, tetrapods are rare and ill-adapted for terrestrial living. Fast forward to after the gap, and we see a diverse assortment of terrestrial tetrapods.

TW:eed researchers focused on a handful of sites in Scotland, which was much closer to the equator and had a tropical climate when tetrapods were first coming ashore. In late 2016, team members described five new species of tetrapod and identified fragmentary remains of at least seven more, all from the Romer’s Gap era.

Thanks to detailed study of the layers in a 500-meter-deep borehole at one of the fossil sites, TW:eed members were able to determine the tetrapods’ habitat was a mosaic of braided rivers and floodplains, with distinct dry and wet seasons. While some invertebrates had transitioned from marine to terrestrial environments millions of years earlier, even more came ashore during this period, along with the tetrapods.

Carys Bennett, a geologist at the University of Leicester who specializes in sedimentology and microfossils, says Romer’s Gap is becoming a misnomer as more species remains are discovered. “It’s full of life,” she says of the era. “It was a thriving time.”