How leaping lizards, dinosaurs and robots use their tails 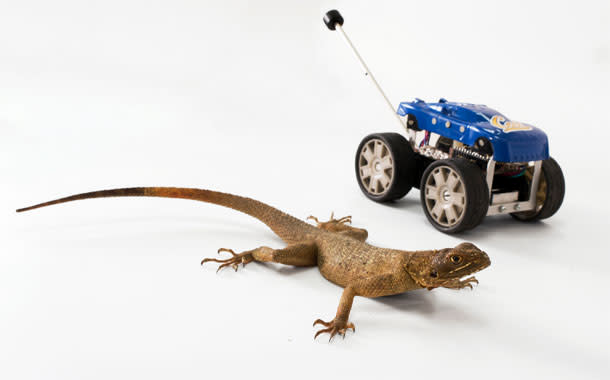 What do a leaping lizard, a Velociraptor and a tiny robot at Bob Full’s laboratory have in common? They all use their tails to correct the angle of their bodies when they jump. Thomas Libby filmed rainbow agamas – a beautiful species with the no-frills scientific name of Agama agama – as they leapt from a horizontal platform onto a vertical wall. Before they jumped, they first had to vault onto a small platform. If the platform was covered in sandpaper, which provided a good grip, the agama could angle its body perfectly. In slow motion, it looks like an arrow, launching from platform to wall in a smooth arc (below, left) If the platform was covered in a slippery piece of card, the agama lost its footing and it leapt at the wrong angle. It ought to have face-planted into the wall, but Libby found that it used its long, slender tail to correct itself (below, right). If its nose was pointing down, the agama could tilt it back up by swinging its tail upwards.

For the same reasons, long-jumpers swing their arms down at the end of their jumps to bring their legs up. Like everything else in the universe, they obey the law of “conservation of angular momentum”. In any isolated system (and an airborne long-jumper certainly counts), a rotation in one direction has to be counter-balanced by a rotation in the opposite direction. If the jumpers want to raise their legs up, they have to swing their arms down. The same applies to a leaping lizard, which doesn’t have long arms, but does have a long tail. If you picture it the lizard leaping to the right, the rising tail has a clockwise momentum, and the trunk gets an equal anti-clockwise momentum. As per usual, the laws of physics fail to break. Libby demonstrated the value of the tail by building a lovely agama-sized robot. It had four wheels and a long, aluminium ‘tail’, and it launched itself off a ramp like a ski-jumper. As the agama-bot jumped, its front wheels left the ramp before the rear ones, causing its nose to tilt downwards. If its tail was immobilised, its body kept on rotating in this way. If the robot was allowed to move its tail (whose angle was controlled by a gyroscope), it did exactly what the real agama did. It lifted the tail to angle its body upwards, correcting its tilted posture. [embed width="610"]http://www.youtube.com/watch?v=nBQSyW3xM2w[/embed] Some dinosaurs might have used the same trick. This isn’t a new idea. Back in 1969, John Ostrom suggested that Deinonychus – a sickle-clawed, larger relative of Velociraptor – would have used its tail as a stabiliser when it jumped. The tail was a stiff rod, but it was flexible at its base and could bend by 90 degrees. By moving it around, Deinonychus could have controlled the direction of its jump. Ever since, drawings have depicted Deinonychus and its relatives as active, agile predators, leaping onto the backs of larger prey, often with tail pointing skywards. One of the raptors in Jurassic Park does exactly this. When it jumps from the balcony onto the T.rex skeleton, its tail angles up, just as leaping lizards do. The animators clearly got the physics right. Libby tested this idea by creating a mathematical model to represent Velociraptor’s body, based on the data he gathered from the agama. The model showed that the dinosaur would have outperformed the lizard. A similar movement of its tail would have corrected the angle of its body by a greater degree. To rotate its body by 45 degrees, the agama would need to rotate its tail through around 60 degrees, but Velociraptor could have managed with around 30. Libby writes that small meat-eating dinosaurs like Velociraptor “might have been capable of aerial acrobatics beyond even those displayed by present-day [tree-living] lizards.” Libby works with Bob Full lab at University of California Berkeley, who has spent years studying the movements of animals, often using delightful robots. This isn’t the first time the group has looked at lizards either. A few years back, they showed that geckos climb walls by exploiting the very forces that bind molecules together. In 2008, they showed that geckos can use their tails as braces to stop themselves from falling, or as rudders to manoeuvre through the air. They even used their discoveries to build a wall-crawling gecko-bot. 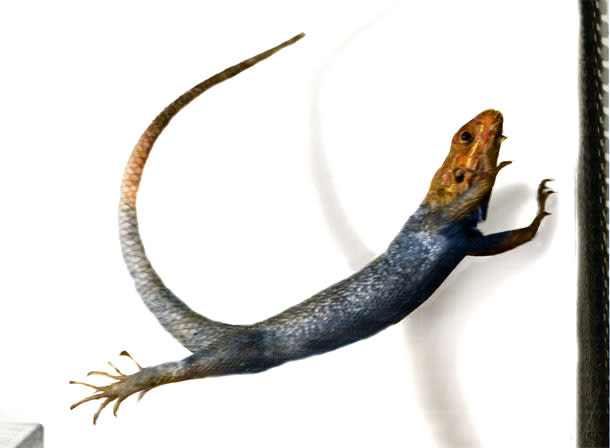