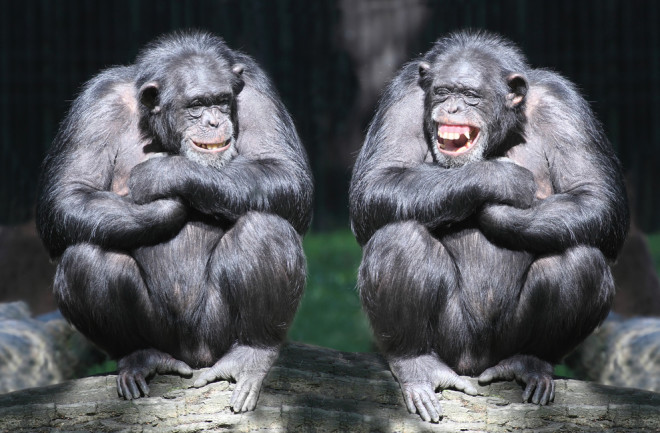 In chimpanzee societies, a whistle followed by a high-pitched hoot seems to mean, “I’m leaving.” Energetic grunts probably say “good food.” And a hip thrust could signal that chimp is ready to get frisky.

These rough translations result from decades of research on chimp communication. In addition to revealing what apes are saying (big surprise: food and sex), the results also reflect why and how chimps communicate — and how this compares to human language.

One of the biggest questions about chimp communication centers around the notion of intentionality. Why do chimps communicate the things that they do? The answer might seem obvious, but there’s actually an important distinction to be made between innate, involuntary reactions to stimuli and calls and gestures that are produced consciously in order to communicate internal things like thoughts and feelings.

The first type of communication includes things like laughing and crying, and it doesn’t necessarily take consciousness to produce. The second requires something called theory of mind, or, the understanding that other beings have thoughts.

Possessing an advanced theory of mind indicates a level of consciousness, and it’s helping researchers assess how intelligent and aware animals like chimps really are. Research so far indicates that they do comprehend that others have thoughts — at least to a degree.

Scientists classify animal communications into different levels of intentionality, developed by philosopher and cognitive scientist Daniel Dennett in the 1980s. The levels correspond to different degrees of theory of mind.

Zero-order intentionality requires no theory of mind and refers to automatic responses without communicative intent. For example, certain monkeys may be biologically programmed to emit an alarm call when they spot a predator. The call can cause other animals to take cover, but that’s not why it was made. Our hypothetical monkey was just screaming, “Holy sh–, jaguar!” (if I may translate from monkey-ese).

But animals with first-order intentionality deliberately signal to change the behavior of others. It’s like our monkey friend yelling, “Jaguar! Danger!” because it knows the call will prompt group members to hide. Second-order intentionality goes even further: The signal is made to change the thoughts of others. This of course requires understanding that others have thoughts, or possessing a theory of mind. The intentionality levels continue (third order is me wanting you to know that I want you to know something), but the debate for apes hovers around the first three.

To determine which level different species attain, animal researchers have borrowed criteria from psychologists who study the development of language skills in infants. Intentional communication is implied by situational clues, like the subject only making a sign when relevant recipients are nearby and paying attention. For instance, a baby only points to a milk bottle when an adult is watching. Or a monkey only makes the “Jaguar!” call when its group-mates are in danger.

Putting aside the hypothetical monkey, what is communication like among our closest relatives, the two species of chimp: bonobos (Pan paniscus) and common chimpanzees (Pan troglodytes)?

Chimps don’t have the vocal anatomy to produce as many sounds as humans. They rely on a limited set of calls, which have been classified into four call types — hoos, grunts, barks and screams — and dozens of subtypes. However, the apes have a much larger repertoire of non-verbal communicative gestures, such as the mouth stroke and exaggerated scratch. Over 70 such gestures have been observed in chimps and bonobos, combined. Together, gestures and calls provide enough substrates for potentially extensive communication.

But for any-order intentionality, the calls and gestures need to be reliably associated with particular events or emotions. Most probably do only in a very general sense, like how crying signals sadness. However some chimp signs, used in particular contexts, may hold more precise meanings. For instance, over 90 percent of rough-grunts (a subtype of grunt) are produced in feeding contexts, suggesting that call translates to “Food!” Subtle variations could hold more information: In one study, captive chimps produced and understood acoustically distinct rough-grunts for high and low ranked food — bread and apples, respectively.

Recent experiments support chimps having first-order intentionality, by showing wild subjects could control their calls and use them tactically. In one such study, lone chimps feeding in fruit trees were played pant-hoots previously recorded from a group member. The feeding chimp was more likely to respond with rough-grunts (the “Food!” signal), if the audio clip came from a close friend or higher ranking individual. In another study, the same team of scientists presented wild chimps with a fake python (made of real snake skin and moved with transparent fishing line, for authenticity). For most trials, the apes made certain calls — the alarm huu and waa bark — when group members were unaware of the danger and continued calling until everyone was safe.

But it’s unclear from these studies if chimps possess second-order intentionality, the desire to change the thoughts of others. Obviously we can’t ask the apes, “Did you alarm huu to get your friends to hide or to get your friends to know to hide?” But other experiments suggest chimps have more limited theory of mind than humans. Based on how they behave when food is hidden from group members, chimps seem to grasp that others can be uninformed, but not misinformed (probably).

Differing degrees of theory of mind might contribute to differences between ape communication and human language. With high-order intentionality, people talk to bond, gossip and make agreements. Somewhere around first or second-order, most chimp messages are declarative imperatives like “good food” and “sex now.” They communicate the essentials — food, sex and imminent danger — but skip the small talk.