How headbutts and dances give bees a hive mind 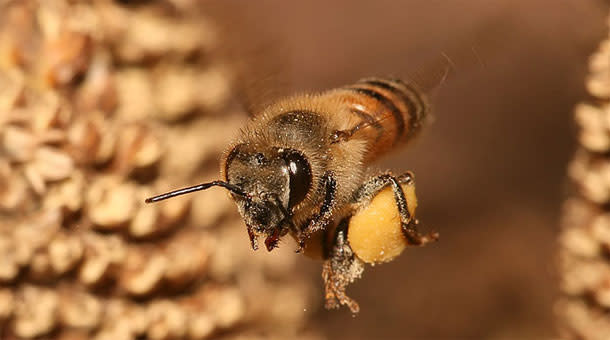 When we make decisions, our brains are abuzz with agreements and vetoes. Groups of neurons represent different choices, and interact with one another until one rises to the fore. The neurons excite some of their neighbours into firing in tandem, while suppressing others into silence. From this noisy cross-talk, a choice emerges. The same thing happens in a bee hive. The entire colony, consisting of tens thousands of individuals, works like a single human nervous system, with each bee behaving like a neuron. When they make a decision, such as choosing where to build a nest, individual bees opt for different choices and they support and veto each other until they reach a consensus. They have, quite literally, a hive mind. One part of this process – the famous waggle dance – was discovered decades ago. By dancing in a figure of eight and waggling their abdomens, bees tell their hive-mates about the location of new resources. The dance is their equivalent of neurons exciting one another. The opposing signal – the equivalent of neurons that repress their neighbours – has only recently been discovered by Thomas Seeley from Cornell University. It consists of headbutts. Bees tell each other to cease and desist by butting their heads against their colony-mates. For 150 milliseconds, they vibrate at a frequency of around 350 Hz (roughly middle G). When these signals were first identified, scientists thought that they were pleas for food. They were wrong – James Nieh eventually showed that bees use the vibrations to silence waggling workers that are advertising dangerous food locations. If they’re attacked while foraging for food, they aim their headbutts at other workers who visited the same location and are recommending it. The meaning is clear: “Don’t go there.” Now, Seeley has shown that the same signal also comes into play when bees choose property. Honeybees build new nests in the spring, when part of the colony buds off to form a new settlement. Thousands of workers swarm around their old hive while the oldest ones scout for promising real estate. Although the scouts bring news of different possible locations, the hive doesn’t splinter. Instead, after a few days, the bees reach a consensus and all of them move to a single new location. Seeley filmed the scouts when they returned to the hive. They waggled away to promote different locations. The length of the waggle circuit tells other bees about the distance to the site. The angle of the dance reveals the angle of the flight from the hive. And the number of circuits shows the quality of the location. But Seeley also saw that the scouts would headbutt their fellow workers and after enough repetitions, these signals would bring their comrades to a standstill. To reveal how the bees use their stop signals, Seeley set up two house-hunting swarms in Appledore Island, Maine. The island doesn’t have any natural sites that could act as potential nests. The bees’ only options were two identical nest boxes that Seeley had set up. Seeley dabbed the scouts with pink or yellow marks depending on which box they visited, and filmed them back in the hive. He found that most of the halting headbutts were delivered to bees of a different colour – the ones that had visited a different nest box. The two groups of scouts, each putting forward a different suggestion, were trying to sanction each other. Once the hive reached a consensus, and the colony was preparing to move off, the bees’ started aiming their headbutts at all other workers, no matter what colour they wore. A decision had been reached, and it was time to tell everyone to shut up and get on with it. Do the headbutts matter? What would happen if the bees just relied on the waggle dance, and headed for the place that the most workers recommended? To find out, Seeley created a mathematical model for the swarm’s interactions, and simulated what happened under different conditions. If he left out the headbutts altogether, or allowed the bees to butt each other indiscriminately, the colony ended in a deadlock. They couldn’t choose between two potential sites. They only reached a consensus (and did so rapidly) when two factions could selectively silence one another. The swarm intelligence of the bees is uncannily similar to the mass of collaborating neurons in our own head. As Seeley himself beautifully puts: “It is tempting to think that the ability to implement a highly reliable strategy of decision-making is what underlies the astonishing convergence in [these two systems]: a brain built of neurons and a swarm built of bees.” Reference: Seeley, Visscher, Schlegel, Hogan, Franks & Marshall. 2011.Stop Signals Provide Cross Inhibition in Collective Decision Making by Honeybee Swarms. Sciencehttp://dx.doi.org/10.1126/science.1210361Image by Muhammad Mahdi KarimMore on bees: