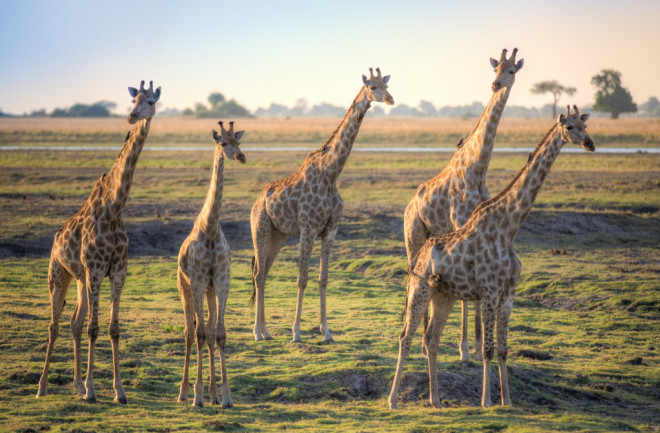 (Credit: Pearl Media/Shutterstock) When you picture giraffes, there's one detail you certainly won't overlook: their necks. Their serpentine necks account for almost half of their height, and a significant amount of their fame. In a new study that sheds some light on just how giraffe necks stretched to such heights, researchers from Pennsylvania State University and the Nelson Mandela African Institution of Science and Technology have sequenced the giraffe genome, as well as the genome of its closest relative, the okapi, for the first time. The analysis highlights 70 genes that show signs of adaptions unique to giraffes, which researchers say play a key role in giving giraffes a chin up on other animals.

Unlike some species of long-necked birds, giraffes didn't grow their necks by adding vertebrae to their cervical spine, they just stretched out the seven vertebrae they already had. So, giraffes necks must undergo a period of rapid growth while they are young. And it takes some complicated natural engineering to support such an outlandish feature. In addition to the obvious muscular and skeletal concerns, giraffes have also evolved an oversized left ventricle and reinforced circulatory system to handle the stress of pumping blood almost ten feet straight up to their brains. They also have specialized blood vessels in their heads and necks that regulate blood flow while bending down to drink, preventing sudden changes in blood pressure every time they take a sip of water.

The Long and Short of It

To figure out just how giraffe necks stretched, researchers from the Giraffe Genome Project compared the giraffe genome to that of the okapi, their nearest relative and the only other surviving member of the family Giraffidae. Okapi look like a cross between a cow and a zebra, although their skeleton is quite similar to that of a giraffe — minus one very prominent feature, of course. The researchers say that giraffes and okapi split around 11.5 million year ago, after which giraffes underwent a tremendous growth spurt.

The okapi and the giraffe diverged from a common ancestor only 11-to-12 million years ago. (Credit: Raul654) Of the 70 genes that the researchers say show signs of adaptions between giraffes and okapi, around half likely play a role coding proteins that regulate skeletal, muscular and nervous system development — all important for producing their notable necks. For giraffes' necks to grow so long, two crucial things need to happen: First, the genes that tell the neck when to stop growing needed to be turned off; second, genes that promote growth need to be upregulated. They singled out one gene in particular, FGFRL1, as playing a key role in promoting neck growth. The gene possesses adaptions unique to giraffes, and is responsible for regulating embryo development, particularly the skeletal and cardiovascular systems. Also of importance are four so-called "homeobox" genes that come into play during the giraffes' development from an embryo into adolescence. These four genes also have unique adaptions that the researchers think instigate rapid growth in giraffes' cervical vertebrae. They published their work Tuesday in Nature Communications.

Exactly how many of these genes influence giraffe development is unclear — their necks are likely the result of complex interactions between many genes. But by comparing giraffes to a close relative and identifying genes that show differences between species, researchers can build a pretty good idea of which genes are responsible for making them look so different. As a next step, the researchers plan to inject the FGFRL1 gene into mice using CRISPR-CAS9 technology to see how it affects growth. While they caution that creating long-necked mice is unlikely, they hope to observe changes in the development of the spine that could clue them in to how giraffe necks grow.